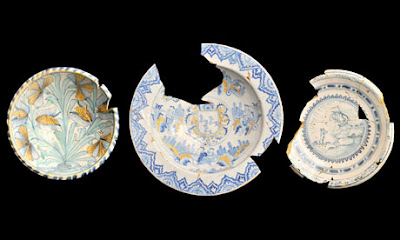 These three tin-glazed ("Delft") bowls, made around 1674, have just gone on display at the Museum of London. The seem to come from the home of an artisan, and they give us a good idea of the kind of decorations that an ordinary craftsman might have had in his home at the time:

Each is a unique piece, demonstrating the varying ambitions and skills of the pottery painters of the day. One is an Islamic-inspired tulip design; another, marking the marriage of NT to ET in 1674, imitates Chinese porcelain; and the last so ineptly attempts a blue and white Dutch painting that museum staff have named it "boy with colander on head tormenting meerkat with stick".

They were all made for show, not for practical use – beneath the fancy painted fronts, the original clay colour shows through the thin glaze on the backs – giving a striking insight into the kind of display a fairly modest craft worker's home might boast. This makes it more puzzling that they were all apparently dumped at the same time, not long after they were made.

"Did they go out of fashion?" Roy Stephenson, head of the archaeological collections at the museum, wondered. "Was there a kitchen disaster when somebody tipped the Welsh dresser over on top of themself, did it all go horribly wrong for them and did they get evicted – or did ET go off and leave NT so he didn't want the marriage bowl around as a reminder any longer?"

The most beautiful is also the best preserved, the tulip bowl, but the marriage bowl provides the clue to the original owners. The crest in the centre – "three beasts with horns waiting to be turned into handbags" says Stephenson – is that of the Leather Seller's Company. The guild's 17th century archives survive, and record that one Nathaniel Townsend was admitted to the company in 1673.