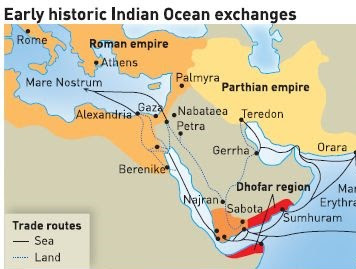 Berenike was a classical town on the Red Sea coast of Egypt that served as Rome's gateway to India. The site has been known since the early 1800s, but the logistics of working there were so difficult – water had to be brought on donkeys from springs 5 miles away – that serious archaeology had to wait until the opening of a paved road in the 1990s. Work has been progressing steadily since 1994. 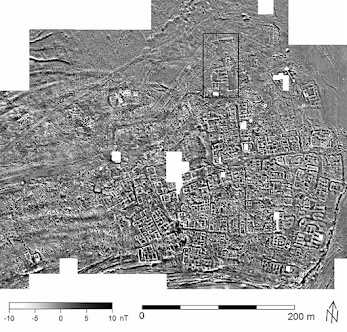 The latest news from Berenike concerns the discovery of a strange shrine. The site is in the northern part of the town, a district marked in red on the magnetic map of the town shown above. 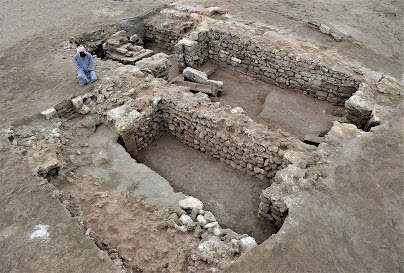 View of the excavation. The upper two rooms were the shrine. The larger room to the right was the anteroom; the unexcavated area farther right was a large open courtyard. The inner sanctum was the room in the left upper left. 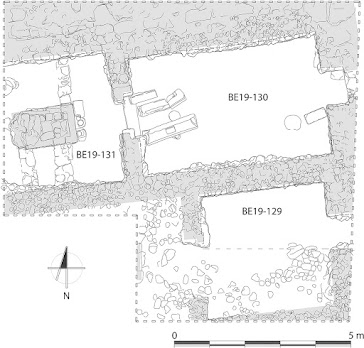 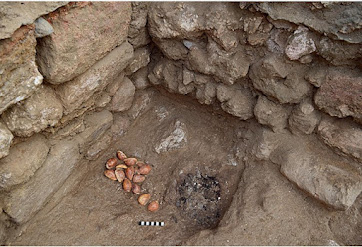 The ancient world was full of shrines, one on every block in some cities. What makes this one amazing is the density of evidence for ritual behavior. This deposit of cowrie shells buried on one corner of the anteroom. 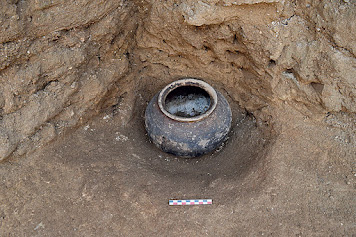 And this pot in another corner, presumably once containing some sort of offering. 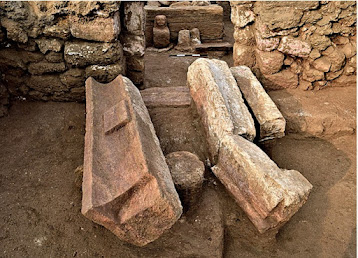 Looking from the anteroom into the inner sanctum, dominated by a pedestal altar, past the fallen lintel of the doorway. 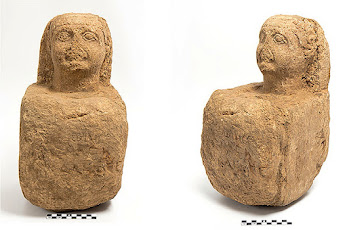 The small "cubic" statue that was resting next to the altar. This resembles figurines from Meroë in Sudan, one small sign of the great openness and cultural blending of the Roman world. There was once Greek writing on front of the figure, but it was too damaged to be readable. 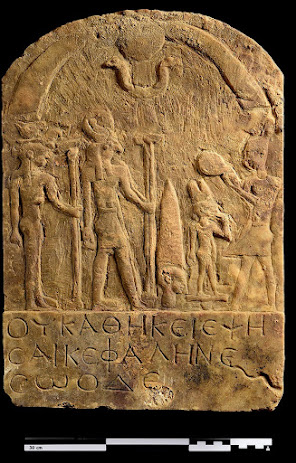 Near the altar was this small stele, which shows a royal worshipper (far right) approaching Harpocrates, a Romano-Egyptian god of secrets – Harpocrates is the smaller figure, second from right, holding a finger to his mouth in an ancient gesture of silence –and two other figures that could be several different Egyptian deities. The Greek text on the stele says, "It is improper to boil a head in here."
Really, that's what it says, and no, nobody else knows why, either.
But that isn't even the strangest thing about the shrine. On and around the altar were a few hundred small bones that turned out to come from three species of falcons: peregrine falcons, saker falcons, and common kestrels. The archaeologists thought that all fifteen falcons had all been lying on the altar when the shrine was abandoned. Which is really amazing, to find all those offerings still pretty much in place. The bones were jumbled, but one important part of the bodies was missing: there were no heads. So whoever these worshippers were, they honored their gods with offerings of headless falcons.
All of these falcons can be trained to hunt for people, but the archaeologists saw no clear sign that these were trained birds. 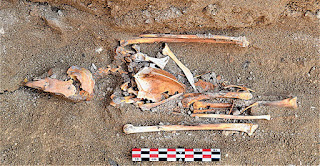 Plus there was an intact peregrine falcon buried in a corner of the inner room.
It's a remarkable assemblage, and a reminder of how much ritual religious activity went on in the classical world. Berenike had a full set of larger temples to more famous gods, including that great syncretic creation, Zeus-Serapis. But those larger, public rituals were not enough for some people. They also went into small neighborhood shrines like this one, where they enacted rites that reminded them of home, or felt more intimate, or allowed them to take a more prominent role, or whatever other reason impelled them to offer headless falcons in the room where it was forbidden to boil heads. 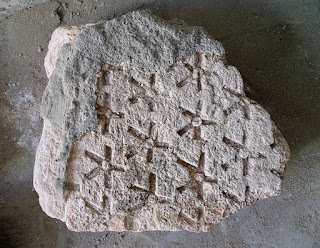 Above, stone fragment from Berenike's largest temple. Original archaeological article on the falcon shrine here. My general post on Berenike is here.
Posted by John at 9:23 PM

I just checked the article, and it doesn't say anything about the falcon bones being boiled. I would think that with such small bones cooking would leave visible traces, but headless falcons are outside my experience, so I don't really know.