Art and Power in Tudor England 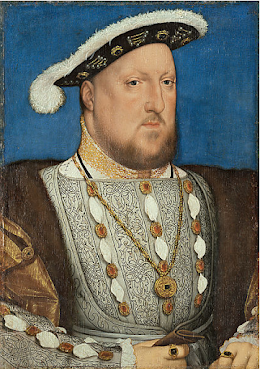 From the Copper Age into the twentieth century, rulers believed that pomp was essential to power. I have sometimes wondered if this was really true, and part of me is attracted to plain men like John Calvin or Mao who wielded great power in boring clothes. But anyway people believed it to be true, so a great deal of the most spectacular art across that whole era was made to emphasize the special status of kings and nobles. The resulting heritage is wondrous. 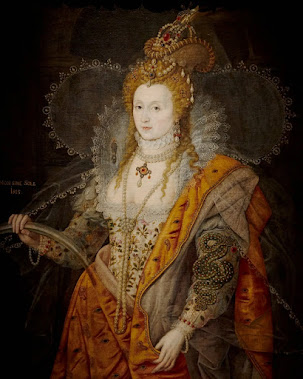 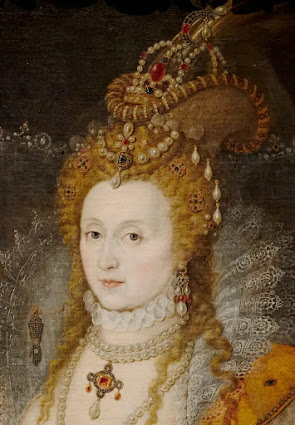 Marcus Gheeraerts the Younger, Rainbow Portrait of Elizabeth I, c. 1602
The Met is now running a pandemic-delayed exhibit on the art of the Tudor court, and the NY Times has a review. Both Henry VIII and Elizabeth I did definitely try to enhance their status with art and spectacle, so this is an interesting topic to explore. Their status needed the boost; England had suffered grievously from the plague, the Little Ice Age, and a bunch of wars, and its population and weath were much less in 1500 than they had been in 1275. In Elizabeth's reign population growth, naval victories, and the beginnings of New World colonization pointed the way toward England's future as a maritime power, but the real fruits still lay two generations in the future. In the 1500s England was a weak nation trying to somehow play a prominent part in European affairs. 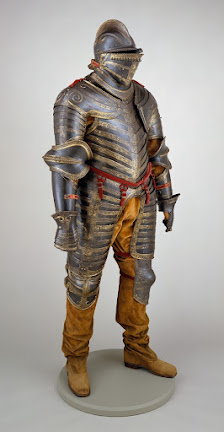 A suit of armor belonging to Henry VIII. (Yes, I know they would have said "an armor.") 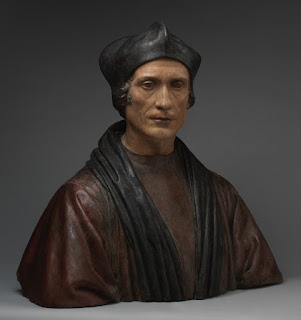 Portrait bust of Bishop John Fisher by Pietro Torrigiano. Nice piece of painted statuary, and good to have a visual for one of Cromwell's enemies featured in Hilary Mantel's novels. 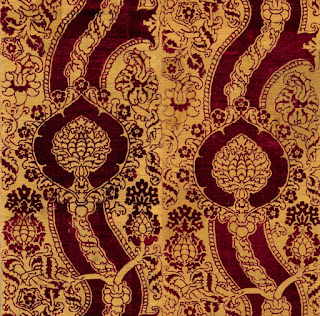 Surviving bit of velvet furniture cover from the period. 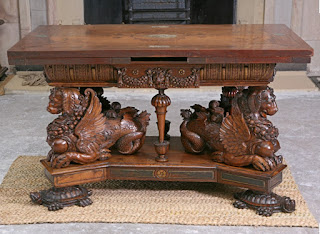 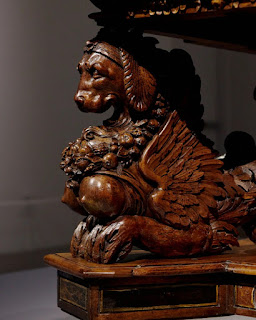 In the works from Elizabeth's reign you start to see nautical matters given prominence, like the "Armada portraits" or this "Sea Dog Table" of around 1575, decorated with sea monsters. 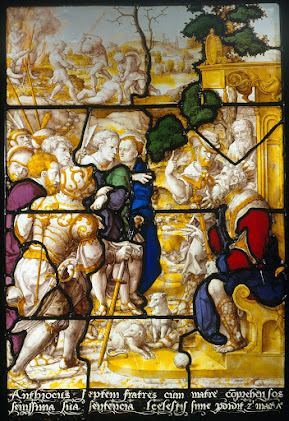 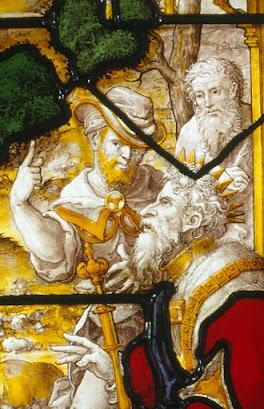 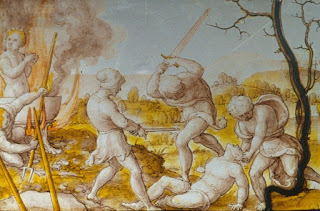 One thing that interested me about the exhibit was the prominence of religious conflict. True, the 150 years of religious strife kicked off by Martin Luther were a big part of their reality, but it still surprises me a little that the rulers of Britain chose to surround themselves with reminders. This stained glass, commissioned in Antwerp by Henry VIII, depicts the Maccabees who were martyred by Antoichus IV in 166 AD, setting off the famous revolt. 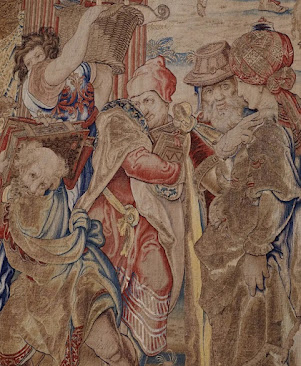 A detail of Saint Paul Directing the Burning of the Heathen Books, a tapestry designed by the Flemish artist Pieter Coecke van Aelst in the 1530s. A reminder that the burning of heretical books was very common in the 1530s. 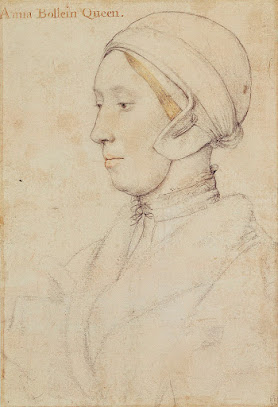 I noticed that this controversial drawing by Hans Holbein has been promoted to a definite portrait of Anne Boleyn. (The writing across the top was added in the nineteenth century.) I suppose that when you're trying to stage a "blockbuster exhibit" the temptation of pretended certainty was just too great. Holbein's drawings are indeed wonderful, and if you want more I have a bunch here. 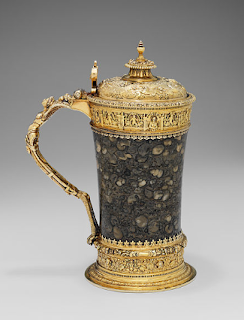 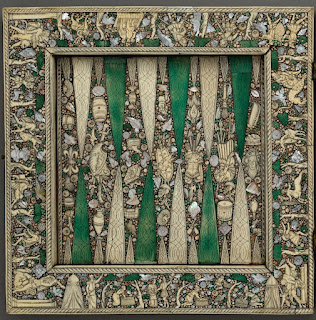 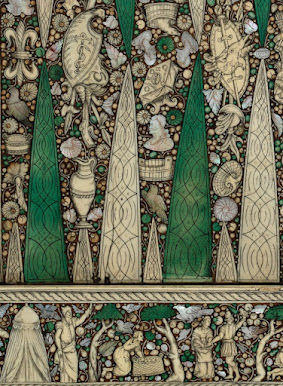 And some images of an amazing backgammon board, circa 1550. This is a wonderfully detailed piece; there is a big image here.
Posted by John at 10:16 AM

From the Copper Age into the twentieth century, rulers believed that pomp was essential to power. I have sometimes wondered if this was really true, and part of me is attracted to plain men like John Calvin or Mao who wielded great power in boring clothes.

If you're a peasant toiling your life away, and the King's procession comes through your town, and he's wearing clothing unlike anything you've ever seen in your life, it reinforces the notion that he's somehow special, which in turn justifies his rule over others.

But if that same procession comes through, and the King looks like any random person on the street, it invites questioning. "Why does that totally ordinary looking man get to order around all those other ordinary looking men? Why does he get carried on a litter while the others have to work to carry him? Why does he get an entire game forest to himself while starving villagers aren't even allowed in to pick mushrooms?"

The same logic even exists today, with regards to our own leaders. You will NEVER see a president in blue jeans and a t-shirt. They all wear tailored suits, in order to appear "presidential" - because to NOT appear presidential would invite doubt as to one's suitability for the office. It's not logical, but it's how people think.

Even when a politician wants to appeal to "the working man" and get their constituents to think they're "one of us", they still wear dress suits and ties. Trump has legions of blue-collar voters who believe he is "an ordinary American", despite his garish opulence. In fact, they wouldn't take him seriously if he DIDN'T wear a suit and live in a luxury suite, because in their minds, he's the end result of "The American Dream", and epitomizes how the notion that if they too just work hard enough, they can also one day be as wealthy as he is! (Nevermind that he inherited his millions and has never worked an honest day's labor in his life...)

Pomp still persists today, and is still essential to power, because the masses still need some visual signifier to suggest to them that their rulers are somehow inherently different and therefor worthy of ruling over them (even if the logic doesn't actually add up in the end).

That's all true, but there are plenty of exceptions, starting with Mao, Stalin, and Castro.

There are also degrees to this. Our Presidents wear nice suits, not golden robes and jewels. And there have been plenty of past kings and emperors who wore their day's equivalent of a nice suit most of the time, only donning their finery on rare occasions. Louis IX of France was described as doing justice wearing clothes like a knight would have worn, with a feather in his felt cap, nice enough but hardly royal.

Compare what Elizabeth II usually wore to the court dress of Elizabeth I and you see what I mean.

Clearly there is the matter of degrees, but my point still stands - Mao, Stalin, and Castro all had their own form of pomp, even if it was rather subdued compared to Queen Elizabeth, etc.

I would also note that in the case of Mao, Stalin, and Castro, even with their "subdued" attire, they all still stood quite far apart from the common people, in a couple different ways.

Firstly, they dressed in the manner of soldiers (which they all were). Being in the military already separates someone from the civilian population, but this separation was further reinforced by their top-ranking awards / medals / ribbons / etc. Additionally, beyond mere dress, their lofty status was constantly demonstrated by the ritual obeisances of the chain of command - salutes, being addressed by rank, drills / parades for the commander-in-chief to inspect ceremoniously, etc.

To be fair, Henry VIII was a soldier, and there's a certain degree of "pomp" in his armor and wartime attire - but not all that much more than would have been present in the gear of other nobles. His armor is very finely made, as well as gilted, but so were a number of the armors of other nobles and even some of the wealthier knights. Among comparable figures of his time, Henry's battlefield attire was not substantially more "pompous".

That said, I think it's important to note that the modern figures of Mao, Stalin, and Castro all had a considerable benefit that Tudor rulers did not - they lived in the modern age, with the benefits of modern printing, radio, photography, television, etc. The people who lived under their rule were all intimately familiar with their faces and voices, by virtue of modern propaganda and mass media. They were iconic figures, instantly recognizable to virtually every single person they ruled over, in a way that would have been utterly fantastical to Tudor monarchs.

The notion of the common person being able to recognize the face and voice of their ruler is extremely modern. Hence, modern rulers don't need to rely nearly so much on overwhelming displays of wealth and "pomp", because they aren't making a "first impression" upon people when they arrive. They can get away with more "subdued" appearances and displays.

If Barrack Obama visits a location, he has the benefit of everyone there knowing 1) what he looks like and 2) who he is. He doesn't need some sort of expensive, signature outfit of such grandiose design as to suggest ONLY someone as important and powerful as a president could realistically be wearing it. He is instantly iconic, without much "pomp" required.

In contrast, if Henry VIII took a stroll through London without the benefit of his outlandish royal attire, and instead "merely" wore something expensive without suggesting outright nobility, you would have excused people mistaking him for a wealthy merchant or a minor landowner, rather than a full blown King, because how could you tell otherwise?

This was an age where people had to rely on physical objects to prove who they were - a time when signet rings and letters of introduction were ubiquitous among people of importance - because otherwise virtually anyone who got their hands on a set of fine enough set of clothes could claim to be someone they were not. Rulers had to do more to stand out and convey their status - they had to be larger than life in appearance, because there wasn't modern media to make them that way otherwise.