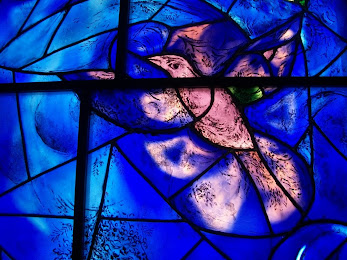 Marc Chagall (1887-1985) is best known as a painter, mainly for works he did before 1920. But Chagall lived a long time, and through the second half of his life he worked as much in stained glass as in paint. 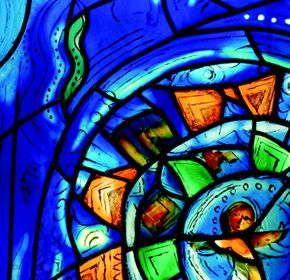 Chagall lived a remarkable life. Born to a middling Jewish family within the Pale of Settlement, he joined the 1917 Russian Revolution largely because it promised full citizenship for Jews. He was soon disappointed by the reality of revolutionary Russia and in 1922 he moved to Paris, where he had spent a few years earlier in his career. 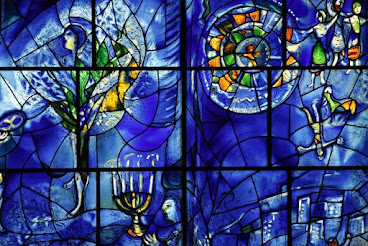 He lived in Paris until 1940, when it was conquered by the Germans. He then moved to Marseilles, where he joined a strange community of internal exiles all hoping to flee abroad. He was eventually put on a list of important artists that the US State Department considered worthy of saving, and he moved to the US in 1941, remaining until 1948. The three images above are from windows Chagall installed in Chicago. 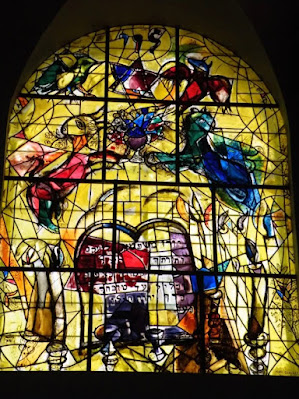 Chagall lived for the rest of his life in France, but in 1960-1962 he spent months in Jerusalem, installing stained glass windows in a new synagogue (above). Of this time he wrote,

All the time I was working, I felt my mother and father looking over my shoulder; and behind them were Jews, millions of other vanished Jews – of yesterday and a thousand years ago. 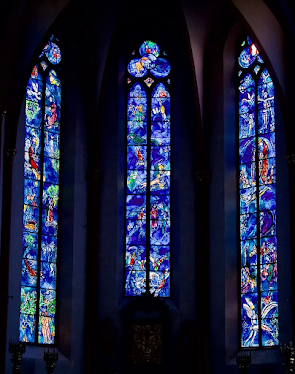 But, and this is rather fascinating, Chagall actually did more work in Christian cathedrals than in synagogues. This was controversial among both Christians and Jews; some French and German Catholics were not happy about giving the work of a Russian Jew prominence in their holy places, and some Jews thought Chagall was betraying his heritage. Chagall himself worried about this, and once went to consult a famous rabbi over his conflicting feelings, and in particular his developing fascination with Jesus. I guess the rabbi reassured him, because he went with on the work. Above and below, Mainz Cathedral, 1978-1986. 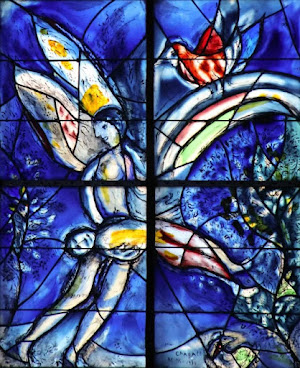 It occurs to me that the aftermath of World War II was a great time to be a stained glass artist, since there were so many smashed windows that needed replacing. 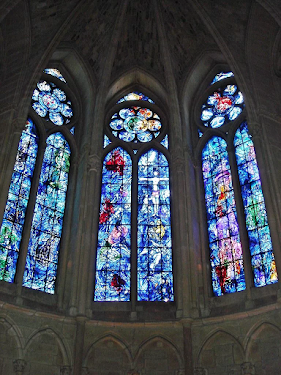 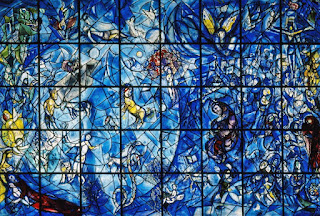 Peace windows at the UN in New York 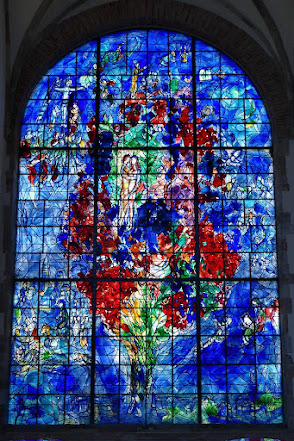 My favorite Chagall window is in the Chapel des Cordeliers, Sarrebourg, France, completed 1976. 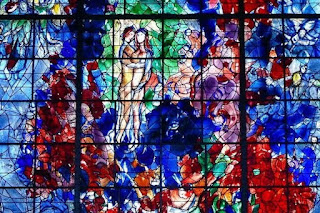 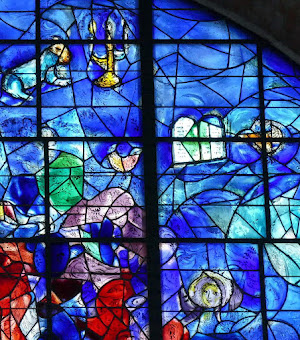 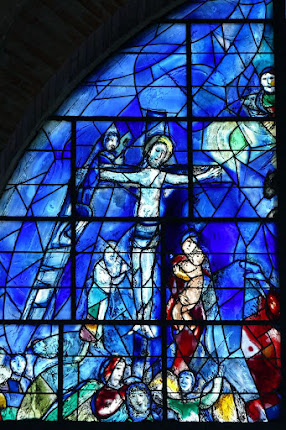 I am puzzled that such an obscure, small town church was able to afford a huge Chagall window; maybe they had a wealthy patron. If so, he made a great contribution to his home town. 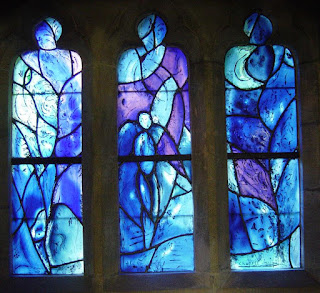 Fascinating post and beautiful pics. I'm especially struck by the figure crawling/kneeling before a candelabrum. I may be projecting, but to me it speaks to the forlorn human longing for the divine, with a hint, full of complex feelings, that what we're looking at may just be a three-branched candle holder.

And is that figure actually a donkey? I do get a sense of a bit of mockery, especially self-mockery.

The beautiful, kind feminine face below makes a wonderful counterpoint.

But I know no more about Chagall than what I just read here, so projection is always a possibility.