Ukraine Update: the Fall of Lyman and its Fallout 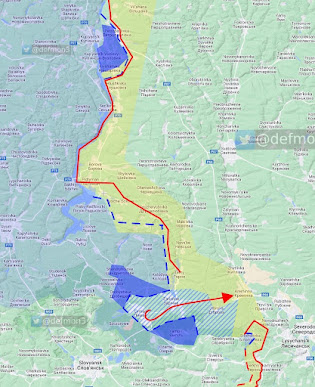 Yesterday Russian forces withdrew from the town of Lyman in Ukraine's north. This town has been a focuse of fighting for two weeks, so this is a significant victory for Ukraine. On the other hand they were not able to complete the encirclement of the town, and most Russian troops escaped. No doubt the Russians abandoned a lot of heavy equipment in the process, and we will be seeing pictures of the losses in coming days. The towns of Zarichne and Torske, where Ukraine was trying to close the trap, were also abandoned by Russia. 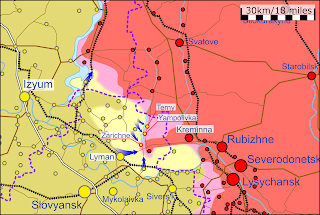 The key question now is whether the Russians can stablilize a new line at Kreminna, the point to which they retreated yesterday; BARS13, the commander of the BARS reserve detachment and a hero to Russian bloggers, said last night that there were not enough men to defend the town. So it hangs in the balance whether this will be a small victory for Ukraine or turn into a big one.

The Institute for the Study of War thinks this was Putin's doing, because he decided to send available reserves to the south instead of shoring up the northern front:

The defeat around Lyman also indicates that Russian President Vladimir Putin – who has reportedly been micromanaging Russian commanders on the ground – is deprioritizing defending Luhansk Oblast in favor of holding occupied territories in southern Ukraine. Ukrainian and Russian sources consistently indicate that Russian forces continued to reinforce Russian positions in Kherson and Zaporizhia oblasts, despite the recent collapse of the Kharkiv-Izyum front and even as the Russian positions around Lyman collapsed.

Meanwhile, the defeat at Lyman is having major political repercussions in Russia, which are fascinating to watch. Z-blogger Rybar called this an "information coup" against the Ministry of Defense and the senior military leadership.

It started with Chechen leader Ramzan Kadyrov, who said the whole Western Military District command was rotten, its recently appointed leader General Lapin should be sacked, and Russia should use nuclear weapons. Others have mostly ignored the nuclear threat and focused on the command problems.

This guy says Lapin isn't the problem, the issues with the Western Military District go back to the start of the war, and reminds us of how many tanks the 4th Guards Tank Division "gifted" to Ukraine. 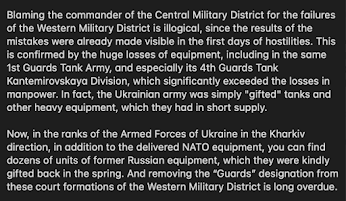 This guy blames the Ministry of Defense for encouraging a culture of lying. 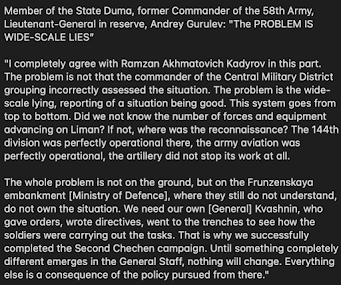 And then a female Z-blogger, Anastasiya Kashevarova, went on a terrific rant about how all the male Z-bloggers are pussies for not challenging the Russian military strongly enough:

Are you men, or not? Do you have balls, or not? Why are you all cowering, using weasel words to cover your asses? You are afraid to name names. You protect Lapin with your pussied-out posts. . . . So comrades Shoigu and Gerasimov, the people want to ask you: Does the president know what's going on? Who reports to him? . . . Where are the supplies? Where are the men? How did it happen? Was it just a fuck up, or was it sold?

Ukrainian political figure Aleksey Arestovych noted that the loss caused the Russian MOD to forget that since they just annexed Luhansk, soldiers of the LPR are now Russians:

The RU Ministry of Defense confirms the withdrawal of "allied" troops from Lyman. The “allied” reference points to the level of chaos as these are now supposedly “RU territories,” and the allied troops are RU citizens.

Igor Girkin, of course, blames everything on the senior Russian leadership, especially Shoigu: 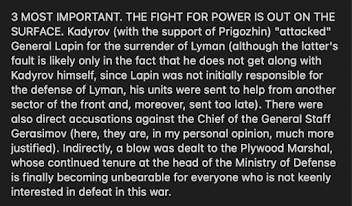 Nice to see the Russians fighting with each other, but on the other hand if the Russians ever were to get their act together, this is how it would start.
Posted by John at 7:53 AM

if the Russians ever were to get their act together, this is how it would start.

To me, all this finger pointing and blame is the exact opposite. It's all somebody else's fault.

I looove reading Russian blogs and twitteratis. The amount of the coping and despair is like honey to my heart.

Aren't there also finally some good news from Kherson front? Russians are coping with "southern front is more competent and has more regular troops", so if their defenses will fall there, THAT would be massive blow to their morale.