Scenes from the Life of Bunny Mellon 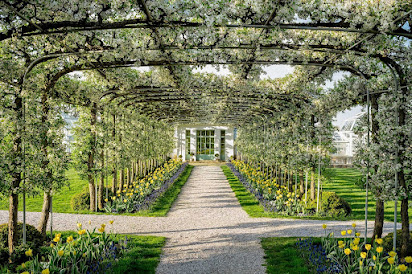 Rachel Lowe Lambert Lloyd Mellon (1910 – 2014), generally known as Bunny, was the second wife of Paul Mellon, hence one of the richest people in America. Her passion was gardening, which she did well enough to win professional design awards. I recently checked a lovely book out of the local library, The Gardens of Bunny Mellon, and have spent a pleasant hour perusing it. It is both beautiful and appalling. The beauty is shown in these pictures, mostly of the Mellons' Oak Spring house in Upperville, Virginia.

As for the other, well, here is her father describing Bunny at about 12:

Bunny began to show a talent that she has developed ever since. She designed and had built a small playhouse in the woods near out house in Princeton. She stood over the workmen every minute, directing them. It was of concrete block with a thatched roof of straw. It had a Dutch door that opened in two sections and was painted blue. There was a square walled garden in front with tiny boxwood bushes forming intricate patterns, and rare shrubs and vines. Inside it was completely furnished, everything done to the scale of the house. 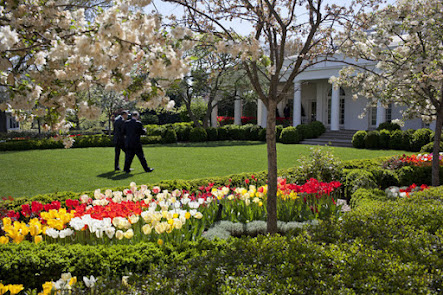 The Mellons were good friends of the Kennedys, and John F. Kennedy tapped Bunny to redesign the White House Rose Garden.

A few months later, while vacationing on Cape Cod, President Kennedy sailed with his family to the Mellons' beachfront home in Osterville on Nantucket Sound for an afternoon picnic. (The menu most likely included Mellon family favorites: corn on the cob, fried chicken, vegetable salad, blueberry pie, and vanilla ice cream.) . . . The President got right to the point, telling her that the White House had no garden equal in quality or attractiveness to the gardens he had seen and in which he been entertained in Europe.

I thought this was an interesting insight into the mind of a true politician:

As the president had requested, the steps leading from his office portico into the garden were redesigned to his specifications. He wanted the central step to be larger and wider than the others so that it could serve as a platform for presentations and speeches. And he wanted the three steps above it to be where honorees would stand, so that he would not be positioned above them. 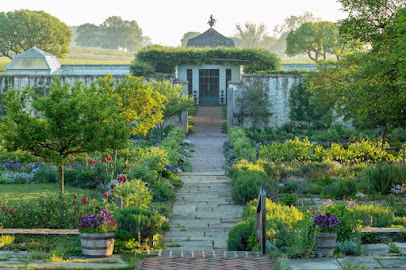 Although the President had put Bunny in charge of the garden design, the work had to be executed by the National Park Service, and they had their own ideas about how it should be done. Bunny and her assistant, Irvin Williams, outmaneuvered them and ended up getting their way in everything, by one means or another.

As the work began, Mrs. Mellon recalled, "Mr. Williams and I realized the garden needed to be wider than the plan called for; the proportion wasn't quite right. Se we asked the G men to move the measuring string on the south boundary over another eighteen inches. Without any discussion or even a moment of thought, they said 'No,' turned away and went back to work. Well, Mr. Williams and I decided we'd wait. As soon as they left for lunch, Mr. Williams quietly went over, measured the additional eighteen inches, and moved the string!  When the crew returned from lunch, they didn't notice a thing, or if they did, they said not a word but went straight to work. We got our way." 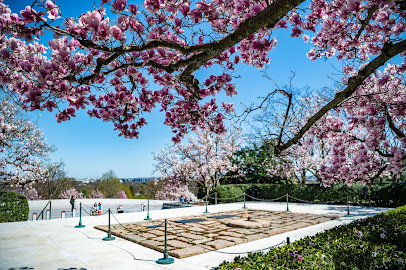 As an adult Bunny had a maxim about her gardens which can stand as a rule for WASP life: "nothing should be noticed." After she and an architect had designed JFK's grave site at Arlington National Cemetery, Winston Churchill died.

This "descendant of Dukes and modern day hero who had rescued democracy," as Mrs. Mellon described him, was buried in his family's country churchyard in a simple grave, with only his name and birth and death dates etched in stone. According to Painter, "Jacqueline Kennedy began to wonder if our design was too formal and architectural after hearing of the simplicity of Winston Churchill's grave."

I mean, we don't want to be different from the other best people. 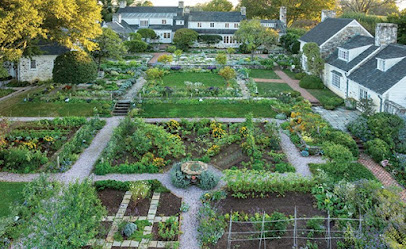 But this is the best one, from a chapter on Bunny's work in France:

On a memorable day in 1968, Bunny Mellon's longtime couturier, Cristobal Balenciaga, announced to her that he was retiring, and walked her across Avenue George V to the atelier of his protégé Hubert de Givenchy. That introduction marked the beginning not only of a new designer-client relationship but also of a deep and abiding friendship. Sharing a profound admiration for the horticultural traditions of the past, in time they collaborated on the redesign and restoration of several historic French gardens. In the early days of her association with Givenchy, Bunny placed an order for one hundred dresses. "I called her office to ask if this was correct. It was," Givenchy recalled. And when he found out that she had ordered the same dress in multiple colors for different houses, it made perfect sense to him. He was impressed with her efficiency.

How can any woman get by without dresses to match each of her houses? 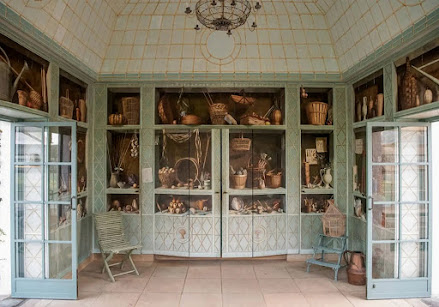 Also, if you're Bunny Mellon, you can get what may be the most famous work of trompe l'oeil painting from the whole twentieth century to decorate the shed attached to your greenhouse. 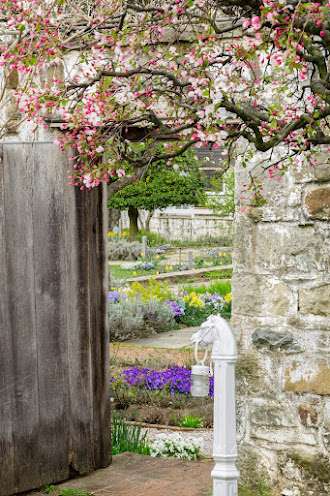 But, hey, the garden at Oak Springs is still there, managed by the Oak Spring Garden Foundation. I hope I'll get to see it some day.
Posted by John at 8:03 PM

For a country that was founded upon the conceit of rejecting monarchy and aristocracy, we sure do produce (and eagerly celebrate) an awful lot of petty tyrants.

...but I suppose trifles like fundamental principles are a small price to pay for such pretty flowers, and the equally tasteful fences around them to keep out the riffraff.

As a member of a riff-raff myself, I feel no more resentment to some one like Bunny Mellon sharing her gifts with the world than I do Tiger Woods sharing his golf game, particularly since I can vicariously enjoy the fruits of her labor without lifting a finger in the design, creation and maintenance of her gardens. And while I abhor tyranny, possessing a talent and sharing it is hardly tyrannical. Denying others the opportunity to develop their gifts is.

Ahh, so given all the would-be gardeners we have who are stuck working dead-end jobs to pay the bills, and therefor are effectively denied the opportunity to develop their gifts, surely you agree we already live in a massively tyrannical society?

Or is it simply enough for you that a small handful of ultra-privileged elites get to develop their gifts on behalf of the rest of us, and you're content leaving the rest to do the grunt work that pays for the opulence of the few?

Bunny Mellon's "gift" was the ability to live a life of luxury in an ivory tower, bossing around menial workers to suit her exact whims, all in the name of creating literal walled gardens reserved for the privileged.

What of the gifts of the people who actually broke their backs digging and planting those gardens, and erecting those walls? What of the people she treated like pawns, literally tricking them into doing precisely what she wanted despite their refusals? What of the people who, generations later, are still spending their days toiling in the dirt to maintain the gardens to exact specifications set in stone generations ago, like Tsarist soldiers ordered to stand sentry over an empty plot of grass for no apparent reason, because a flower once grew there that Empress Catherine fancied and ordered guarded year round?

...or are their "gifts" the ability to spend their lives working for their bread, with the privilege of earning their paychecks by catering to the whims of the rich?

...or does none of that matter, just so long as you can vicariously enjoy the fruits of "her" labor without lifting a finger yourself? (Even though you can't, because these gardens aren't open to the public. Or are mere pictures enough to satisfy your principles?)

...and suppose you didn't enjoy the look of the gardens - would you still defend them, and the expense of their design, creation, and maintenance? What of people who don't vicariously enjoy "her" labor? What of the people who would prefer we actually uphold the egalitarian values this country was founded on, and that we spuriously claim to hold so highly?

My principles are to not begrudge others what they have, to not live in resentment. I myself work in a menial job, and others above me earn much more. But I do not begrudge them their success and I have my job by virtue of their leadership. I judge my worth not by what I receive, but by what I give, and have found I need not despise others for their gifts. By doing so, my heart is light and my cares are few. We all return to dust in the end anyway. What will I have gained by grasping at others' momentary blessings?

What will I have gained by grasping at others' momentary blessings?

Justice? Fairness? Decency? Humanity? A diminishment of senseless suffering? Hope for future generations to live in a world not despoiled by greed and selfishness?

You would tell the poor and exploited of the world not to grasp at the "momentary blessings" hoarded senselessly and in obscene excess by others? To not despise those who condemn them to live in misery and desperation, while they themselves live in unimaginable excess and privilege? To be content with their wretched lots in life while others lord over them as if they were insects, all on the premise that "we all return to dust in the end anyway"?

Such a stance is violently abhorrent to me, and smacks of the hideous complacency of comfort and privilege. It would be impossible for me to remain civil toward anyone who earnestly thinks such things, and so I shall excuse myself in disgust. I would ask you to seriously dwell on the response your words have prompted, and engage in some self reflection and soul searching - but I fear it'd be a pointless and fruitless request.

What happens to the poor when they attain the wealth of the rich? Do they become despised in turn for their attainment? The cycle never ends, and human nature never changes.