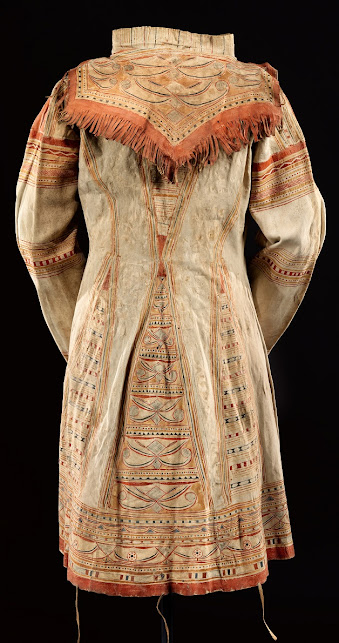 A reminder that while Thomas Jefferson is on the outs because of his hypocrisy about slavery, he remains a hero of religious liberty; the statue just removed from New York's City Hall was paid for Jewish naval officer Uriah P. Levy, because it was Jefferson who made it possible for Jews to serve in the Navy and to attend his creation, the University of Virginia. (NY Times)

Short history of Yanga, a community of self-liberated African slaves in eastern Mexico.

Mention here of a study that found 90% of people rated their own objectivity as above average. (NY Times) It is important to remember that while you feel your opinions are justified by the facts, because you are rational and objective, everybody else feels the same way.

A bit of Aztec cruelty: the Festival of the Flayed God. Just like the Aztecs to celebrate the new plant growth of spring with torture and human sacrifice.

Trying to map all the connections in the brain of a fruit fly: 25,000 neurons and 20 million synapses mapped so far, a lot more still to do. (NY Times, ungated articles here and here.)

Scott Siskind goes meta with QAnon: "My point is we're all engaged in this kind of desperate project of trying to feel like we're having new important insights, in a world full of people who are much smarter than we are." I think this is very broadly applicable, especially to academia but also to bloggers like me.

Long, somewhat strange article by David Graeber and David Wengrow about the remote human past, focusing on how flexible and diverse our political and social arrangements used to be, concluding by asking why they are so rigid now. I feel like population density and economic complexity are such obvious answers to that question that after displaying real learning and intelligence they end up making themselves look obtuse.

It's an old story in the US, low-grade wars between white settlers and Indians, with the Indian attacks remembered as crimes or "massacres" and the white attacks as law enforcement operations or justified revenge. But really it was just a slow-motion war of conquest. The post-Gold Rush California version is back in the news now because it turns out the man who founded the University of California law school hired a militia to kill Indians around his ranches. (NY Times)

Chaos in Haiti, where the country is running out of fuel because gangs are blockading the ports, the police lack the firepower or the will to take on the gangs, and gang leaders hold press conferences demanding the resignation of the Prime Minister, who probably colluded in the murder of the President, etc. Where should one start with such a place? (Reuters, NY Times)

Is this really a "take this job and shove it" moment"?

Gold mask from Peru, daring to around 1000 AD, was painted with human blood. But was it the artist's, or from a sacrifice? Both strike me as possible.

How Jacobite politics troubled the marriages and ghosts of 18th-century England.

The history of the Jackfruit, which has lately been touted as a meat substitute but was first grown outside south Asia by British planters as a cheap food for slaves.

Today in Republican drama, Marjorie Taylor Greene calls Liz Cheney a "Karen." Getting rough out there.

This week's music is Miles Davis and friends, Kind of Blue. As my eldest son put it, this is the jazz album that even people who hate jazz like.

"a roughly 190-pound machine with eight rotors and fly-by-wire aeronautics. It has a maximum capacity of 210 pounds, but it can fly even if one motor fails. Other safety features include an aluminum frame with crumble zones, a ballistic parachute and obstacle avoidance lidar"

I have questions about their "can fly even if one motor fails" comment, because "can" is pretty vague. A car "can" technically drive if one tire fails, but it certainly doesn't drive well - and suffering catastrophic a tire failure at speed usually directly leads to a loss of control and subsequent risk of a crash.

I have to imagine that losing a rotor on this thing while traveling at 60 miles per hour would immediately cause you to not only veer off to one side suddenly, but also pitch downward violently because you've suddenly lost 25% of your lift - and since you're mere feet off the ground, that seems like a crash is then pretty inevitable.

The safety features listed by the article seem laughable to me - looking at the video, I struggle to imagine which sections they think qualify as "crumble zones" (those are the linked article's words, not mine - the proper parlance is crumple zones). There's just doesn't seem to be enough visible material / room there to offer any meaningful protection in a crash.

As for the ballistic parachute, unless you make the mistake of plunging off a cliff, I'm not sure how much use it could possibly be given how low to the ground the thing flies. Ballistic parachutes are intended for use at low altitude, but that means while your are hundreds of feet off the ground, not five or ten. Maybe it's there in case your controls get locked while in stable flight and you need a drag chute to slow you down for some reason? Or maybe it's there for some legal reason I'm unaware of, related to the ultralight classification? I dunno.

Note - the FAA does not require any proof of flight worthiness whatsoever for ultralights. I personally would not risk my life and limb in one of these things. Nosediving into the ground at 60 miles per hour because an (unshielded!) rotor failed for any reason seems like a recipe for grievous injury. I would absolutely recommend that anyone determined to pilot such a machine wear bull body impact armor like that used in motorsports, because there's seemingly little else to actually protect you in the event of a crash. (And don't forget to include the weight of that armor in your maximum load calculations.)

Ultimately, this seems like a gimmick designed to appeal to people with more money than sense. I'm sure they'll sell every one they produce, and I'm sure we'll see news articles about people dying in them before too long.

...how bizarre. That would be like resentful Americans referring to all British people as "Hanoverians", because the House of Hanover used to rule Great Britain.

@David- well, first they go on for a while about early human physical diversity, then say we really know nothing about how any of those people lived. Then they jump to the handful of really weird paleolithic burials, then to Göbekli Tepe, which we also know very little about. Then they jump to the late nineteenth century for a complaint about how some Europeans thought savages had different feelings than civilized folk. All cool stuff, but why is it in this essay? I can't figure it out, except as a general sign of human diversity, and perhaps to indicate that people we think of as primitive can surprise us with their sophistication. Then finally to Lévi-Strauss on the Nambikwara, something else I find fascinating, which leads them to what I take to be their main point: that human societies used to be very diverse, and people used to move back and forth between more "civilized" and more "savage" modes of living. I agree that is a very important insight and I would have enjoyed a whole essay on that, covering for example the Maya collapse, the rise and fall of Mississippian cities, people abandoning farming to become pastoral nomads, etc. But what was Home naledi (a species name many anthropologists reject) doing in this essay? Honestly it felt to me like they had started with a 100-page article and pared it down to this little piece.

I thought that might be it. The article does have a sort of breezy style of, "We don't know anything about Paleolithic people, but from this one burial we can conclude X, and now that we know X is true for all Paleolithic people, we can say . . ." etc. I think it's pared down from their soon-to-come-out book, _The Dawn of Everything_. So yes, it's pared down from something, though Amazon says the book has 704 pages.

I wonder if the book may have elements of an attack on James Scott's Against the Grain--which I have not listened to yet. Perhaps somewhere in that, on some level, Scott suggests that Paleolithic people were beautifully free, not only from the state and too much work, but also from the burden of conscious thought. Scott seems way too smart to suggest such an old-fashioned, 1920s primitivism-style thesis, but I do wonder. And perhaps what Graeber and Wengrow are after is a more sophisticated but still anarchist account of how humans got subjected so universally to the things anarchists hate--without including consciousness and rationality among those things. However it is, I'm intrigued, and I have both in my Audible shopping cart.

Or maybe Scott is channeling Jaynes! :)

Or maybe he was channeling Scott Siskind's milder but very wise point: Bronze Age people were really weird. Somehow we have to find a way to account for past cultural weirdness without saying something like, "well, you see, these people didn't think," an approach I myself have been attracted to, once upon a time.

And tonight there's a review in the NYT of their new book: https://www.nytimes.com/2021/10/31/arts/dawn-of-everything-graeber-wengrow.html

Looks like they may be arguing more against the idea that humans are advantage-maximizing machines whose thoughts or so predictable they might as well not exist. Or at least that's my guess from a scan.