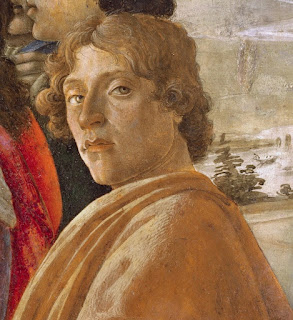 Sandro Botticelli, self portrait as one of the witnesses
to the Adoration of the Magi, 1476
Here's the My Modern Met's list of Twenty Famous Artists Everyone Should Know:

I don't want to get into quibbling with this list; mine would be different, of course, but these are certainly twenty of the most famous and important artists of the modern period. But notice how the gaze of the art world shifts around in chronology and geography.

We start with three Renaissance Florentines; for that century, the gaze of the art-loving world is focused on one medium-sized Italian city. 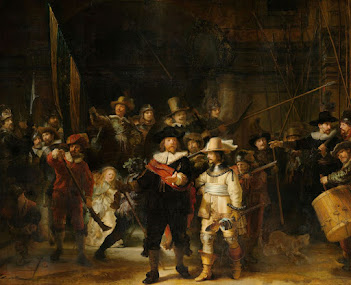 After nodding toward Mannerist Rome our gaze travels north. One of the many figures left out is Albrecht Dürer (1471-1528), who I suppose had the bad luck to be competing with the Florentines, but then we take in the wonders of the Flemish Renaissance and the Dutch Golden Age. 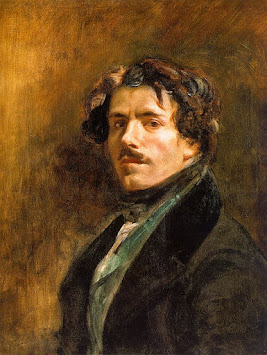 We then skip over more than a century, ignoring the late Baroque period (think Versailles) and all of the eighteenth century. We just don't love the painting or sculpture of that period, or its poetry. What stands out in the art of that era, for us, is music, the glittering arc from Bach and Vivaldi through Haydn and Mozart to Beethoven. Does this mean anything? Is it just an artifact of whims in taste and things that happen to have gotten famous, or the random distribution of the greatest artistic geniuses, or are certain ages really better at some things than others? In defense of the last view we might note that people in the eighteenth century wondered themselves why their poetry and drama were worse than those of previous periods, when they were themselves so much more Enlightened. But they liked their painting, which we mostly don't.

One also sometimes reads that art has to follow certain trajectories, because of internal factors or what have you, so music had to go from polyphony to Baroque to Classicism to Romanticism. I have never really understood what these arguments mean or how they work in practice. One analogy I suppose would be mathematics, each advance leading logically to another, or raising new questions that the next generation answers. And it just happens, this argument runs, that the necessary movement of music between 1720 and 1820 thrills us. 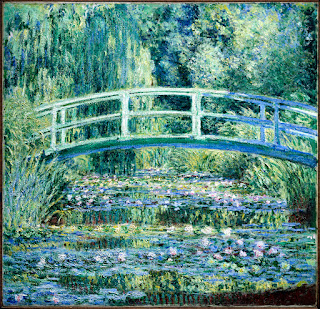 Then our gaze shifts to Paris and Vienna for the astonishing period that marks the ascent of modernism. Conventions that had dominated art since the classical world were smashed, and some of the results were glorious. This went along with a further refinement in the artist as celebrity, giving us men who worked at least as hard on their public personas as on their paintings. I find it interesting that while Paris was the capital of art some of the top artists were Spanish, moving back and forth between Paris and Barcelona. This, and the European catastrophes that drove so many artists into exile, explains how Mexico got to share the spotlight for a while.

Then comes the rise of New York; you may hate Abstract Expressionism and Pop Art, but that was the first period in which European art critics took American art seriously. (Georgia O'Keeffe painted in New Mexico but her work was shown and sold in New York.) I have always suspected that the art and architecture of the 1950s says something dire about the culture of our time, but I have never been sure if this is so, or, if so, what that dire thing would be. 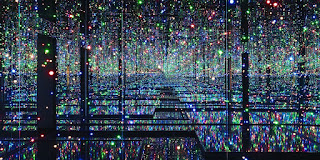 And finally we nod toward the rise of East Asia, as the wealth and creativity of Japan and now China brings their artists to center stage. 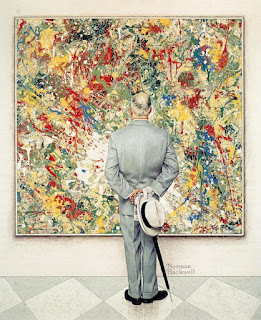 Whenever I think about this sort of art history I imagine a bored, rich museum goer, rudely dismissive of anything not famous enough to be worthy of attention, cruising hurriedly through the gallery so as not to waste time better spent seeing and being seen. Ah, here we are in Florence, wasn't Michelangelo amazing, pity Leonardo was such an oddball, let's move on to the Flemish room. I see them at a biennale, taking a few moments off from celebrity gossip to glance at the work everyone is talking about this year, I mean, one must be up on that, before going back to the bar for another drink and to see who else has arrived at the gala.

I suppose that isn't fair; if one is to present the history of western art in a manageable amount of time or space one has to leave out almost everything. I just have my suspicions that this wandering gaze, skipping across centuries and omitting whole continents, is about something other than the love of art; that is it corrupted by, among other things, worship of celebrity, thirst for novelty, immersion in irritating arguments like when the Renaissance began, and refusal to devote too many brain cells to art that isn't important in the sense that everyone already knows it is.

Basquiat, but not Giotto. Whatever.

I would add JWM Turner.

Velasquez, El Greco or Van Dyke need to be in there, for the transition to using whote as a color. Pick one.