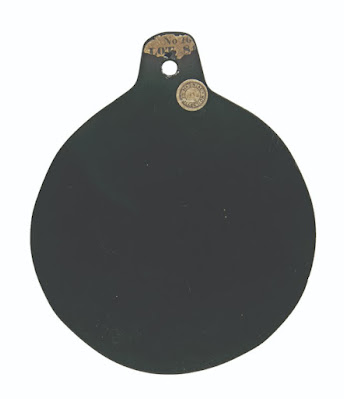 Elizabethan magus John Dee, who was involved in everything from mapping the Atlantic Ocean to alchemy to music theory to the most bizarre occultism, sometimes used a "magic mirror" to speak with spirits. One mirror has been preserved in the British Museum that may have been his. Notes in the hand of Horace Walpole call it "The Black Stone into which Dr Dee used to call his Spirits." Walpole (1717-1797), author of the first gothic novel and builder of the first neogothic house, was among other things a collector of arcane objects and especially prints of subjects like witches' sabbaths. So he was something of an authority, and if he says this was Dee's mirror, it might well be. He even traced some of its provenance, noting that it had been in the collection of the Earls of Peterborough.

And how many obsidian mirrors were there in eighteenth-century England anyway?

Typical of Walpole that he also supplied a poetic epigram in this note:

Kelly was Dr Dee's Associate and is mentioned with this very Stone in Hudibras, Part 2. Canto 3 v.631. Kelly did all his feats upon The Devil's Looking-glass, a Stone.

This mirror is in the news because some scientists have run a sample of it through their elemental analyzer and discovered that it is from Mexico, likely the very same quarry at Pachuca from which the Aztecs got stone for their own mirrors. It looks like an Aztec mirror, and had long been supposed to be one, but this nails it down. Dee almost certainly knew where this mirror came from, since he was very involved in supporting the exploration of the New World and publishing the discoveries made there. I find that interesting. Did he think the mirror might be imbued with arcane devilry, or even soaked with the blood of human sacrifices? Or did he just think that the Aztecs had the best obsidian?