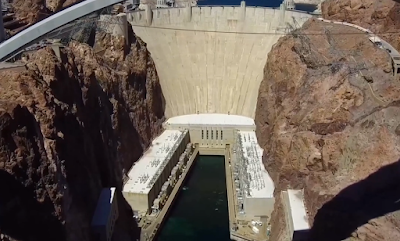 The most widespread way of storing extra electricity for use later is still "pumped storage," that is, using the power to pump water uphill when there is a surplus and letting the water run back downhill when power is needed. This is a proven technology and an effective one. But it requires a lot of water and a steep gradient up which to pump it. And where might one find more of that?


Hoover Dam helped transform the American West, harnessing the force of the Colorado River — along with millions of cubic feet of concrete and tens of millions of pounds of steel — to power millions of homes and businesses. It was one of the great engineering feats of the 20th century.

Now it is the focus of a distinctly 21st-century challenge: turning the dam into a vast reservoir of excess electricity, fed by the solar farms and wind turbines that represent the power sources of the future.

The Los Angeles Department of Water and Power, an original operator of the dam when it was erected in the 1930s, wants to equip it with a $3 billion pipeline and a pump station powered by solar and wind energy. The pump station, downstream, would help regulate the water flow through the dam’s generators, sending water back to the top to help manage electricity at times of peak demand.

Seems like a great idea on the surface, although with storage technologies changing so fast there is a risk that such a big project might be uneconomical before it is finished.
Posted by John at 8:13 AM

Wait... I must be missing something...

If you want more water kept behind the dam, why would you use solar and wind power to pump water back uphill, instead of just reducing the rate of water flow through the dam to begin with?

I mean, sure - reduced water flow means less power output from the dam itself. But can't you just make up for that energy loss with the solar and wind power they want to use anyway to pump water back uphill for some reason? The other way would have awful efficiency.