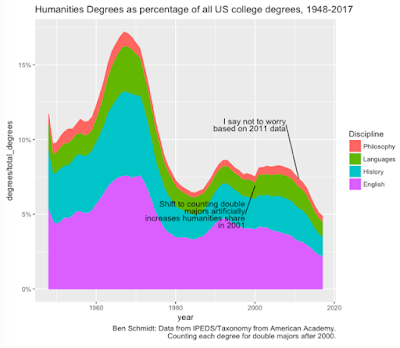 Back in 2013, Sapping Attention wrote a blog post arguing that the supposed "crisis" in the humanities was a hoax. He has now come back with a new post saying that he was wrong and there really is a crisis.


No matter what baseline you use, virtually every humanities major went into significant decline around the time of the 2008 financial crisis. . . . Rather than recover with the economy, that decline accelerated around 2011-2012. That period constitutes an inflection point for a variety of majors in and out of the humanities. Though it may have slowed a bit in the last few years, there's little sign that the new post-2011 universe holds signs of a turnaround.

The big picture, I think, is: after the boom and bust of the 60s and 70s, the humanities entered a long period of stability from about 1990 to 2010 or so. That period has ended, and now we're entering a new one in which levels will be very different. We'll obviously stabilize somewhere, probably in the next few years, and maybe we'll rebound a bit, but I'd be very surprised if humanities numbers in five years were even 2/3 what they were in 2005.