The First Vikings in Iceland 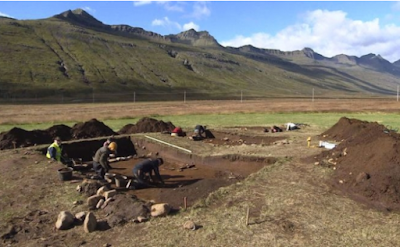 Written accounts tell us that the first Viking to live in Iceland was Ingólfur Arnarson, who settled in Reykjavík in the year 874. But obviously Arnarson can't have been the first Viking to set foot in Iceland; you don't pack up your whole family and move to an island that has only been sighted from afar. Plus Arnarson already knew enough about Iceland to pick what may be the best spot on the island for his home, even though it was on the opposite side from Scandinavia.

Now there is archaeological evidence of Vikings on the island decades before Arnarson and his family staked their claim:


Archeologists who have been excavating a site at the farm Stöð in Stöðvarfjörður in East Iceland unearthed two large Viking Age longhouses. The two longhouses are very large compared to other Viking Age structures excavated in Iceland and Scandinavia.

Bjarni Einarsson, the archeologist in charge of the dig told the local TV station Stöð 2 that the younger of the two houses was built on the ruins of the older structure, which measures as much as 40 meters (130 ft). Both structures are located beneath the "settlement layer", a layer of volcanic tephra that fell sometime in the years 869-73, making both older than the "official" time of settlement. . . .

Bjarni told Stöð 2 that C-14 dating indicates the older structure was built shortly after the year 800, suggesting settlement in the Eastfjords 70 years before Ingólfur Arnarson arrived in Reykjavík.

Einarsson thinks he has unearthed the site of a fishing camp, which were common in Scandinavia:


Local chiefs would send out teams of workers to establish camps in remote uninhabited areas during summer, where they hunted, fished and produced various goods. The camp in Stöðvarfjörður could have been used to fish, hunt seabirds and seals, as well as to produce oil from whale blubber and iron from bog ore. Most Viking era iron was smelted from bog iron.

Such seasonal camps could have been used for decades before permanent settlement began. Bjarni believes they played a key role in the settlement of Iceland:

"People would have come here to work part of the year, producing goods during summer to take home in the fall. They would have taken these goods home, as well as information about this new land. Based on this information people would then have been able to make an informed decision to settle here permanently."

Plus, much of Iceland's history is preseved in place names


The very name of the farm Stöð and the fjord Stöðvarfjörður seem to support this theory: Stöð translates as camp, station or base.

Well, depending on what the actual language being used in these written accounts is... not necessarily. He may not have been the first Scandinavian to set foot in Iceland, but that doesn't mean he wasn't the first Viking there.

The thing to remember is that "Viking" refers to your job, not to your culture or place of origin. The thing that actually makes you a "Viking" is that you are a seafaring raider - essentially a pirate.

When you examine the claim from that angle, it becomes obvious that there's no real contradiction to the statement. You could describe somone as being the first Caribbean pirate to live in Cuba without also claiming they were the first person to ever set foot there. In the same way, there's nothing inherently strange about claiming Arnarson was the first North Sea pirate to live in Iceland, despite other non-pirates living there first.