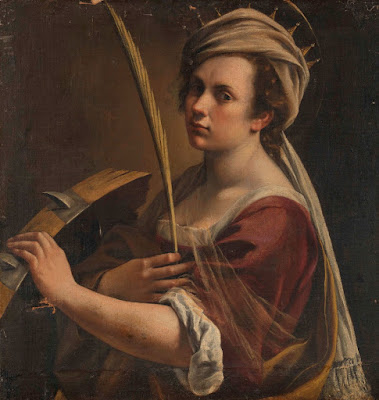 Artemisia Gentileschi (1593-1656) had an interesting life and has lately embarked on an equally interesting afterlife. She was one of the seventeenth century's most prominent female artists, and perhaps the first woman admitted to the Accademia di Arte del Disegno in Florence. After her death she was pretty much forgotten, dismissed by most conoisseurs as a minor figure and reviled by a few as a foolish slut. (Self Portrait as Saint Catherine of Alexandria (ca. 1615-1617), recently sold to London’s National Gallery for £3.6 million or about $5 million.) 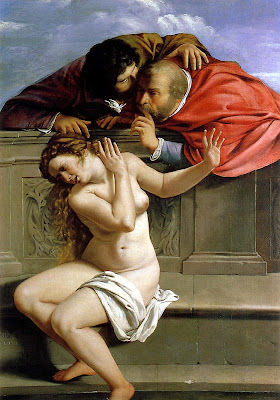 Then came feminism, and suddenly in the late twentieth century Gentileschi was famous and acclaimed in a way she had never been before. Not only was she a female artist, she was a rape victim whose personal testimony, preserved in the legal records of the Governor of Rome, still has the power to move and even shock us centuries later. Two generations of feminist critics, among them Germain Greer, have seen in Artemisia a woman struggling against male power, whose paintings encode resistance and a call to sisterhood. (Susannah and the Elders, 1610, completed when Artemisia was 17.) 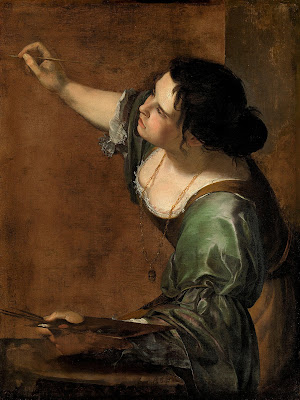 But this of course only embroils us in other questions; given that her story can be made into exactly what millions of our contemporaries want in a heroine, what was she really like? And with that background she could be getting major shows now without much talent to speak of; is she any good? After all, as Elisabeth Cohen wrote in the best account I have found of the rape trial, "Between her death and the twentieth century she received little written coverage." (Self Portrait as an Allegory of Painting) 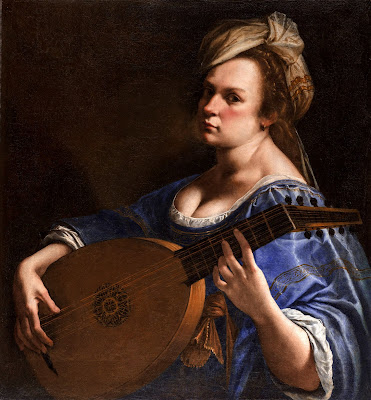 Artemisia was the daughter of Roman painter Orazio Gentileschi, a friend of the great Caravaggio -- one of the witnesses in the rape trial mentioned a day when Caravaggio dropped by the Gentileschi home to borrow a set of angel's wings. Her mother died when she was a child, and she grew up in a house full of male painters. When she approached puberty her father brought a chaperone into the household, a neighbor women named Tuzia who seems to have spent more of her time conversing with the artists than watching over her young charge. Artemisia was trained by her father – a sentence that could be written about all the female painters I know of who lived before about 1850. She learned very quickly and only three years after she first picked up a brush she was assisting with her father's commissions and producing her own works for sale. (Self Portrait as Lute Player, 1615-1617) 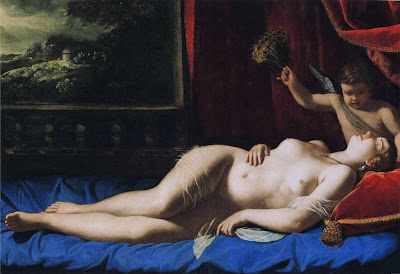 In 1612, according to her account, one of her father's associates, a regular house guest named Agostino Tassi, forcibly raped her while her chaperone looked away. He then molified her by promising to marry her. Nine months later her father brought suit against Tassi for struprum, a technical legal term which meant "forcible deflowering." The record does not tell us why Gentileschi waited so long, but most historians guess that he thought the couple were going to marry, and that what triggered the suit was Tassi's refusal to go through with the wedding. (Sleeping Venus, 1625-1630) 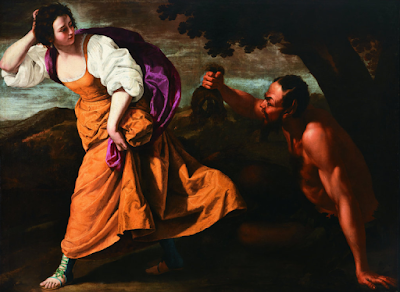 Eventually the court found Tassi guilty and sentenced him to five years banishment from Rome. This was a lenient sentence; a more usual punishment would have added a fine large enough to pay a dowery for Artemisia and cover all Gentileschi's legal costs. Plus, even the light sentence was not carried out, and Tassi remained in Rome completing a commission for the Pope. The Pope, Paul V, usually gets the blame for Tassi's getting off Scot free, and he now regularly appears in history and historical fiction as the celibate scowling face of rape culture. But notoriety is nothing new for him; in a papacy that spanned 1605-1623 he achieved several sorts. As the rumored sponsor of the Gunpowder Plot in England he ended up burned in effigy on Guy Fawkes Day by generations of Englishmen; as the Pope who ordered Galileo not to teach or publish about heliocentric astronomy he became the great enemy of science. (The Nymph Corsica and the Satyr) 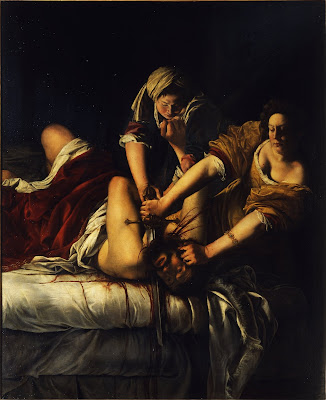 Artemisia, meanwhile, her honor upheld by the court, found another husband and got on with her life. Sadly that husband proved to be an unreliable loser, and after a few years we find Artemisia traveling alone, raising at least one daughter by herself. Modern accounts sometimes make it out that the rape was the key event in her life and art, setting the tone for everything thereafter. These critics often point to this work, Judith and Holofernes, which they say her the painter herself as Judith and her rapist as Holofernes. 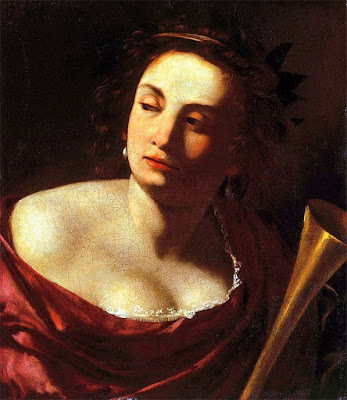 Others say that projects modern attitudes about rape into the past and furthermore turns Artemisia into a one-deminsional artist, and they prefer to put the emphasis on how hard she found it to win commissions as a woman working in a very masculine world. (Allegory of Fame, 1625-1630) 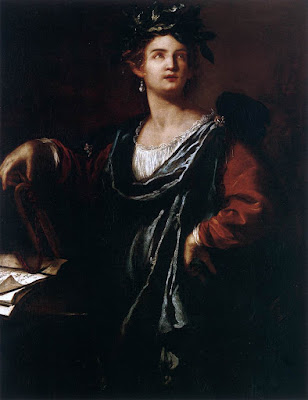 So, my gentle readers, how good was she? Is her art worth all the attention it is getting now, or is the whole business just politics? Is there such a thing as artistic quality independent of the identity and biography of the artist? I, of course, believe that there is. I would say that while Gentileschi was hardly Caravaggio, that is no crime; not everyone can be the best. I like her art just fine, and would take any of these over everything by Jackson Pollack, Willem de Kooning, and Jasper Johns put together, and they get big name museum shows. So why not her?  (Clio)
Posted by John at 8:52 PM