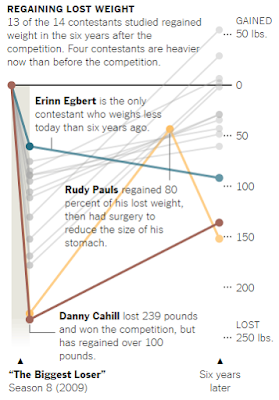 Back in 2009, federal scientist and reality TV fan Kevin Hall had an idea: to use a season's worth of contestants on The Biggest Loser to study what happens to people's bodies after they lose a lot of weight. The results make pretty grim reading – unless you are looking for excuses, in which case they are gold.


It has to do with resting metabolism, which determines how many calories a person burns when at rest. When the show began, the contestants, though hugely overweight, had normal metabolisms for their size, meaning they were burning a normal number of calories for people of their weight. When it ended, their metabolisms had slowed radically and their bodies were not burning enough calories to maintain their thinner sizes.

Researchers knew that just about anyone who deliberately loses weight — even if they start at a normal weight or even underweight — will have a slower metabolism when the diet ends. So they were not surprised to see that “The Biggest Loser” contestants had slow metabolisms when the show ended.

What shocked the researchers was what happened next: As the years went by and the numbers on the scale climbed, the contestants’ metabolisms did not recover. They became even slower, and the pounds kept piling on. It was as if their bodies were intensifying their effort to pull the contestants back to their original weight.

Mr. Cahill was one of the worst off. As he regained more than 100 pounds, his metabolism slowed so much that, just to maintain his current weight of 295 pounds, he now has to eat 800 calories a day less than a typical man his size. Anything more turns to fat. 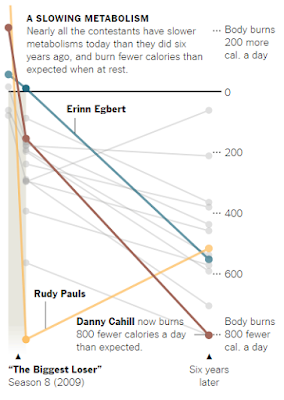 People can lose weight and keep it off, but only if they make it one of the central goals of their lives.
Posted by John at 7:43 PM

Drastic, rapid weight loss is dangerous and always has been. If you want to slim down, you need to plan it out over time. Losing 20 pounds in a year is a realistic and healthy expectation for those who are serious about slimming down - losing 20 pounds in a month is a fantastical and horryifying one.

Drastic changes to diet are also a terrible idea. You don't want to starve yourself of caloric intake to lose weight - instead you want to increase the amount you burn through exercise. Certain dietary changes are desireable, such as eating healthier foods overall and cutting out snacking in between meals, but if you want to lose weight safely and not regain it down the line, you simply increase your physical activity so that you burn more calories then you take in.

Then you just let the effects accumulate slowly over time. If you can lose a pound a month simply by having a manageable increase in exercise and eating foods that don't leave you hungry or miserable, you're doing okay. You'll drop twelve pounds a year, and in five years you'll be down 60 pounds. Then when you reach a weight you like, you simply slack off slightly on the exercising front.

The human body is in some ways quite comparable to an economic market. Correcting an imbalance through drastic, sudden swings is inherently destructive in itself, and also carries a high risk of over-correction or unintended rebound effects. Far smarter and safer to produce smaller, more manageable corrections that accumulate over time with a minimum of effort, disruption, and suffering, and the changes are more likely to persist in the long run.