Walking on the Once Forbidden Grass 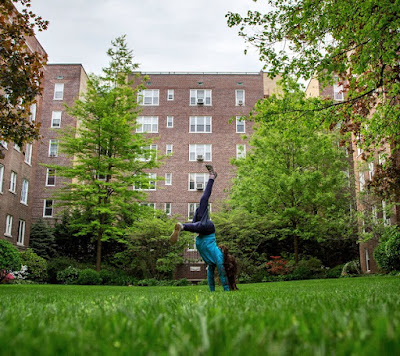 In Jackson Heights, Queens, a strange war over the grass is drawing to a close:


At the end of a pitched battle that lasted nearly a decade, residents of the Hawthorne Court, a 14-building apartment complex with an expansive landscaped backyard, can now walk on the grass. The 140-unit co-op was one of the last holdouts among a distinctive group of residences in this historic district of north-central Queens to lift its grass-walking ban.

These apartment buildings were designed starting in the early 20th century by the Queensboro Corporation, with buildings that surround blocklong interior green spaces. For years, many of the co-ops mandated that the backyard be reserved for quiet contemplation. Reading a book or strolling the grounds was allowed so long as residents kept off the grass and stuck to designated walkways and benches. The lawn was not to be disturbed.

But over the last decade, a new wave of buyers moved into Jackson Heights, often paying significantly more than those who came before them, and bringing different ideas about how the gardens should be used. In one camp were the longtime residents who wished to preserve the tranquil nature of the gardens. In the other were the newcomers, primarily families with young children, who wanted to roll out picnic blankets and let their children run on the grass. Heated discussions of whether the latter should be permitted transpired, and rules were eventually loosened.

Keep Off the Grass signs are, to me, one of the most offensive violations of freedom dreamed up by the order fanatics. In the immortal words of Stranger in a Strange Land, it is in the karma of grass to be walked on. And, I would add, in the karma of children to run and play on it.
Posted by John at 7:09 AM

But couldn't one say that this is a microcosm of the problems we find in our nation's democracy and living together today? What do you do if you wake up one morning and find that you are an order fanatic? In the John America, do you just accept that you're evil, know yourself and your place, and shut up? (As some SJWs seem to want the politically-incorrect to do.)

(I might add that I personally love walking on a pretty, cool, green grass lawn, and love seeing kids playing on the same. On the other hand, one might suggest that existing in pretty, cool, green, monoculture lawns isn't the real karma of grass any more than not being walked on, at least not in most places.)

(By the way, I just beat you in this round of the rationing outrage game. :) Yay me.)

If you wake up one morning and realize that you are allowing your own selfish desires to compel you to deny other people fair and valid usage of a communal resource, then I would hope you would have a moment of personal awakening, a change of heart, and a gesture of reconciliation and making of amends.

People need to learn to share. If your apartment complex has a basketball court, that's great for the basketball fans out there, but they need to make sure they also respect other uses for a paved courtyard that other residents might want to take advantage of. When the neighborhood kids want a place to play tag, and they don't have reasonable alternatives, then their desire to use the court shouldn't be treated as lesser or invalid simply because the court is intended for basketball and not tag. The same space needs to be shared equitably, and people need to be civil and take turns using it, even if for wildly different purposes, and even if that means devising a scheduling system to ensure everyone gets a fair opportunity to use the space.

Americans are simply too selfish these days.

In a philosophical vein: I have written here before about my bafflement at the extreme visions of order that animate many of my fellow humans. The sort of thinking that gives us a monastery is completely alien to me. To me life is a riot of feeling and action: joy and sorrow, hope and despair, love and hate, courage and submission, birth and death. It is painful, yes, even terrible, but without that riotous creativity, what is life? I do understand that I personally have little experience of the horror that drives some people to seek quietude; perhaps some of those old folks who insisted on perfect grass around their condominiums lived through World War II and the Holocaust.

But that basic sense that life needs to be morel like a carnival than a cloister lies behind many of my opinions. I hate neighborhoods in which all the house look the same, tied together by identical lawns of chemical-drenched grass. I am creeped out by people in uniforms marching in step. And pained in my heart by children told that they can't play on the grass.

I see your belief and your deep love for it, but perhaps the beginning of wisdom would be to let go of some of what we love and try to understand the other point of view, without making them dredge of up some rationalization like they lived through the Holocaust. And surely you're going overboard in your hymn to anarchy above all, everywhere, all the time. I imagine you like a quiet cloister as much as the rest of us. I have memories of occasions when you've written with pleasure about the aesthetics of military formations. And no matter how subtle or stylistically anarchic, the act of planting a garden creates an order. I'm not saying this is in a gotcha sense--a person without contradictions and crosscurrents would be dead.

I'm also not saying I'm open and wise. It's easy for me to be open to both sides in the grass debate, but I admit I'm pretty rigidly closed to things said in defense of the Confederacy, for example. God forgive me.