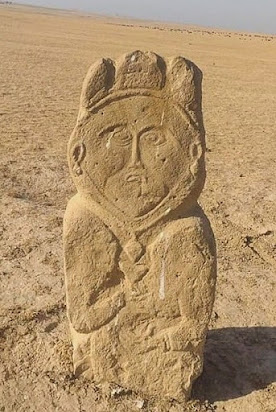 Stone sculpture, 1 meter (3.3 feet) tall, recently discovered
in Kazakhstan near the Syr Darya river,
dated on the basis of style to c. 700 AD.

Learning about the Timucua Indians from a Spanish confessor's manual. (For example, "Did you order that incantations should be recited over the lake before fishing in it?")

Artists around the world have submitted 55,000 sketchbooks to the Sketchbook Project, and you can peruse many of them online. Just find the "random book" button.

The NY Times lists the 25 most significant works of architecture since World War II. A few are ok, but mostly, ugh.

Nigerian megachurches: the biggest can accommodate a million worshipers, and some are building their own cities.

Huge, zoomable image of the wonderful Tiffany stained glass window at the Art Institute of Chicago.

One of Rome's boundary stones, which marked out the sacred border of the city, has turned up in sewer work. Other stones are known but this is the first to be found in over a century.

Four of the DC police officers who responded to the Capitol riot on January 6 have now died by suicide, the last two within hours of each other. One of the weird things about this is that so many cops commit suicide anyway that nobody seems to know if this is even unusual.

Hyperloop's thoughts on trains, tunneling, and their demonstration project in Las Vegas.

Researchers in many academic fields (particle physics, analytic philosophy, economic theory, etc.) feel like they are at dead ends. Is this a result of real limits in what we can learn about the world, or of the strange ways we organize academia?

In a remote, mountainous part of southern Australia, several hikers have disappeared, and people talk about a mysterious Button Man who hangs out in the woods all summer, making buttons from deer antlers. (NY Times)

The Washington Post publishes a strange article titled "Five Myths about the Haitian Revolution," none of which is entirely false, and a couple of which are entirely true.

After mistaking him for someone else, police in Hawaii arrested a homeless man and committed him to a mental hospital where his protestations of innocence were called "delusional" and he was dosed with anti-psychotic drugs for more than two years. It's the kind of thing that makes homeless people paranoid and unwilling to accept many kinds of help even when offered.

Democratic moderates have won four contested primaries in a row over more progressive candidates, and are in chest-thumping mode. (NY Times, NBC News)

At the Met, a splendid exhibit on the art of Medici Florence. All 34 beautiful objects here, splashy slideshow explaining the symbolism and politics in terms of social media here.

After Chicago's Great Fire of 1871, the Chicago Relief and Aid Society distributed more than 5,000 kits to build small homes know as Shelter Cottages for emergency housing. A few survive, although nobody known how many.

In India, trying to preserve a beloved cricket stadium. We've seen movements like this in several American cities, but they have always failed, because the teams say they need "modern" stadiums to remain competitive. No idea what the dynamic will be in India.

NY Times review of the new book by Lake Country shepherd James Rebanks (my review of his memoir here). The new book is about sustainable farming and says it will only happen if people become willing to spend a lot more on food. (And a Time piece by Rebanks arguing this himself.)