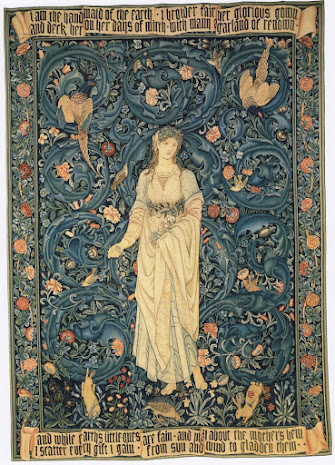 Five parrots separated at UK zoo after encouraging each other to swear at guests.

Rails to trails: the US now has more than 24,000 miles of bike and walking rails along old rail road lines. (Washington Post) And the Rails-to-Trails Conservancy's Hall of Fame, showcasing the best trails.

Diving gods, who are shown in Maya art plunging from the sky, and the famous Maya blue paint on the vessels that depict them.

In California, the politics of homelessness are changing: after saying the only solution was more subsidized housing Governor Newsome has now come out strongly in support of removing homeless camps from sidewalks and other public land. Signs are that voters in California are fed up, and politicians are responding. I have an acquaintance who lives in San Francisco and I think he would vote for Lenin if that meant the homeless people were cleared off his block.

The spiritual outpouring that flooded West Germany in 1945-1949: a review of A Demon Haunted Land by Monica Black.

Another in a continuing series: environmentalists against solar arrays, this time in Texas. These folks may have a point, but then there is almost always a reason not to build a solar array or wind farm in any particular location.

And more from the messed-up world of Young Adult book Twitter, where a book judged by mainstream critics to be heavy-handed preaching of tolerance has been attacked as racist and harmful to People of Color, near as I can tell because it depicts racist characters saying racist things. Which is one of the reasons why my imagined, magical realism novel about 18th-century America will never be written.

Excavations at a Roman bath site in Tuscany that was also a religious sanctuary.

Charles H. Loeb and the role of the black press in exposing the radiation damage from the bombs dropped on Japan (NY Times). According to this article, black newspapers rejected the government's claim that radiation damage was small (based on readings from fallout downwind, not the initial gamma burst) and insisted anti-Japanese racism played a part in justifying the use of the bomb.

Interesting 90-minute documentary about the Smothers Brothers Comedy Hour and their conflict with censors that eventually led to the show being cancelled.

The resident pedant wishes to point out that the use of "Pythagorean Triples" in Babylonian land surveying – groups of numbers like, 3, 4, 5 and 5, 12, 13 that give you right triangles – is not the same as having a general Pythagorean Theorem. You can absolutely use equations that seem to work without being able to derive them from first principles or prove that they are generally true – even modern physicists do this – so just using the formulae doesn't mean you understand the rule. Which means that this article is not exactly right, and the tablet they discuss is not a "Babylonian Pythagorean Theorem."

Do polar bears sometimes attack walruses by throwing rocks at them from above? Maybe.

After a decade of protests, lawsuits, denials, etc. Newark, New Jersey has now replaced all of its lead water pipes. The cost was $120 million in a city of 274,000. The new federal infrastructure plan has $15 billion for lead abatement but cities and states are going to have to come up with at least as much to finish the job. (NY Times)

The young man who killed a Pentagon police officer, then himself, had been menacingly stalking his neighbors, had had numerous run-ins with the police, and was obviously crazy, but he never got any real mental health care. He was supposed to be on his way to a psychiatric evaluation when he launched his final rampage.

The Cantopop band Mirror has swept Hong Kong, spawning  adulation, a Facebook group called "My Wife Married Mirror and Ruined my Marriage," and, some say, the first mass joy the city has seen in years. Which gives me an excuse to post a playlist of Asian boy band pop. As a service, I mean; I assume many of you do not have Asian daughters who could introduce you to this stuff, so let me point you to a sample: Mirror, "Warrior"; "My Dear Friend," BTS, "Fire"; "Idol;" EXO, "Overdose,"  "Growl." And here's your introduction to a whole genre of videos called "Dance Practice," some of which have millions of views. I don't love this music but I am sucker for performers who really crank out the energy, and these guys do.

Would not most people who distrust science likely just be people who are less trusting overall? And would that not then mean they, quite naturally, are less likely to trust pseudoscience as well, and everything else for that matter?

Also, you must keep in mind that the entire point of pseudoscience is to superficially imitate actual science - it intentionally tries to adopt the trappings of science in order to fool people into thinking it is legitimate, as science is.

It's utterly unsurprising, then, that people who "trust science" are overall more susceptible to falling for pseudoscientific claims - you might as well report that people who trust the police are more likely to follow orders from an imposter wearing a police uniform standing in an intersection directing traffic. Obviously if you trust something, you are more likely to trust an imitator of that something (assuming you fail to tell the difference).