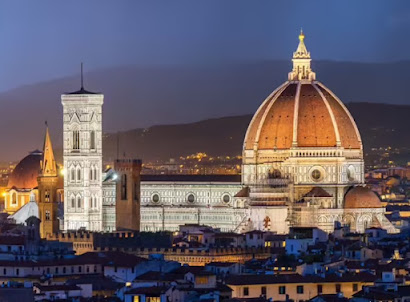 In the late 1200s – before the Black Death, before the Little Ice Age – Europe reached a pinnacle of population and wealth it would not surpass until well into the 1500s. Rich, growing, proud cities competed with each other by building ever larger, ever grander cathedrals. In Florence, the city's elite decided to build a cathedral such as nobody had ever seen before. It would be huge and tall, and it would be surmounted by the largest dome ever constructed. 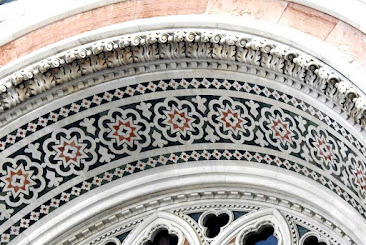 (To put yourself in the mood for the rest of this post, consider putting on Nuper rosarum flores, a vocal work by Guillaume Dufay that was performed at the consecration of the cathedral in 1436.) 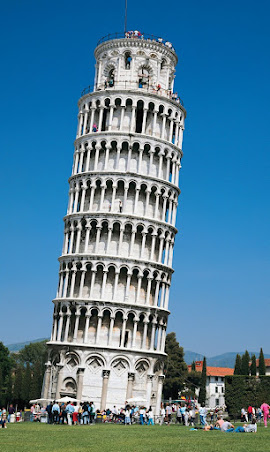 The Florentines actually began constructing their new cathedral three times, each time abandoning the old design as too small and paltry and beginning anew. The thing is, and this was true all across Europe, the ambitions of these builders were outrunning their technical knowhow. Many grand edifices simply collapsed; by one estimate half of the new cathedrals built in that period suffered at least one catastrophic failure during construction. In some of these, fortunes were lost and dozens of men killed. Lesser failures bringing down one arch or one section of wall were routine. You have to remember that nobody could calculate whether a design would stand up until after Newton's time, so these builders were all relying on some combination of experience and guesswork. As the new cathedrals grew larger than anything the people involved had designed or worked on before, guesswork predominated. 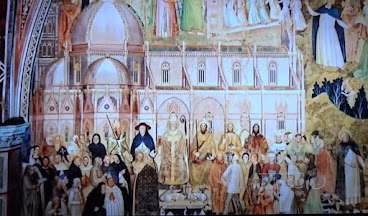 The design for Florence's cathedral was finalized in 1294; the main architect was a man named Arnolfo di Cambio. The painting above, completed before construction of the actual dome had even begun, shows how it was imagined. Di Cambio was an Italian patriot who disliked the messy spikiness of Northern Gothic. He therefore banned flying buttresses, which carry much of the weight of northern cathedrals. He specified that the lateral forces generated by his great dome, doing their best to force the walls outward, would be contained by stone and iron chains built into the masonry. This technique had been used successfully on smaller domes, but nobody had tried it on a dome anywhere near as big as the one he envisaged. Di Cambio also specified that this would be a double dome, the lower dome a hemisphere and the outer dome taller, so as to present a more pleasing profile. 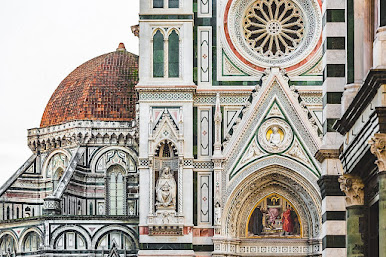 But then the weather turned cold, the plague came, the population fell, trade was interrupted, etc. So it was after 1400 before the cathedral had been built up to the point, 180 feet above the ground, where construction of the dome would begin. Gazing across the opening that the dome had to span, 143 feet 6 inches across (44 m), Florence's leaders began to worry. No such dome had been built since the days of ancient Rome, so it was not at all clear how this would be done. People began to say that instead of a great triumph the cathedral would become one of Italy's great jokes, and Florence would be known as the city with the huge hole in their cathedral's roof. In 1420 the Republic held a public competition and invited architects and builders to submit their plans for building the dome. 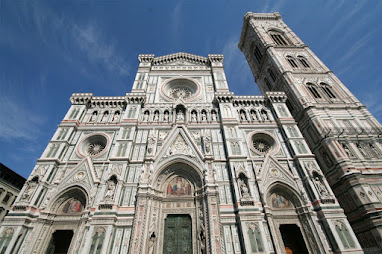 All of the entrants but one proposed to build the dome by first erecting a vast wooden frame on top of which the dome would grow; this, the usual method of building domes and arches, was called "centering." But the Florence dome would be so big that to build such wooden centering would be hugely expensive. Hundreds of massive trees would be required, and in a crowded Italy such trees were rare and costly; the wood to build the centering would have cost more than all the other materials of the dome, and the city simply did not have the money. Only one man said that he could build the dome without centering: a Florentine goldsmith named Filippo Brunelleschi. Brunelleschi was not an architect and had never built anything. In the best Renaissance style he claimed that years spent in Rome and elsewhere studying Roman building techniques gave him special knowledge of such matters. Asked to describe how he would build the dome, he refused, saying his methods were secret; give me the job, he said, and you will see.
I am tempted to try this the next time I bid on a big project; "my methods are secret, but hire me and you will see what a genius I am." 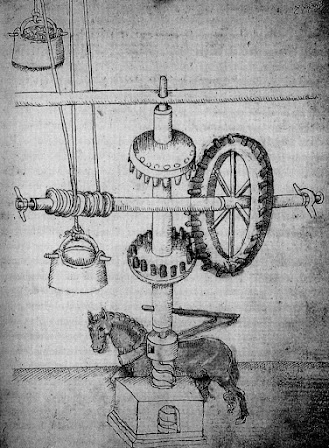 And they hired him. But they forced him to work as part of a committee of three with two other, more experienced architects, and they declined to pay him the announced prize of 200 gold florins until he showed that his method could work. No doubt Brunelleschi was miffed, but he had the job and set about doing it. And he finished in in 16 years, nothing short of astonishing for medieval construction. His first task was to create a new method of lifting materials to the cathedral roof, since an old-fashioned hamster-cage crane would have added years to the project. His ox hoist, as it was known, is now one of the most famous mechanical contrivances of the Renaissance. It had the first known reverse gear, allowing the oxen to walk all day in the same direction whether loads were going up or down; it also had what we would call a three-speed transmission, so heavy loads would rise more slowly, putting less strain on the beasts and the device. 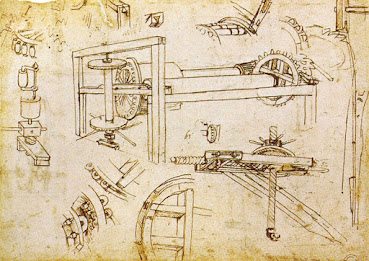 Among those who were fascinated by the design was Leonardo da Vinci, who did this drawing; imagine how furious Brunelleschi would have been to learn that some future historians thought this was Leonardo's own creation. Anyway Brunelleschi's machine worked wonderfully and needed no major repairs across the whole 16-year process of building the dome. 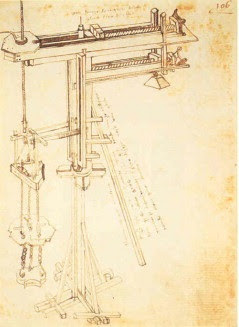 But the hoist just got the material up and down. To ease the heavy stone beams that made up the chains into the exact position Brunelleschi built another crane, called the Castello, and this became another famous Renaissance marvel. In this case the only surviving drawing is the small one by Leonardo, who seems to have been the only later witness to understand how the thing actually worked. All modern reconstructions are based on that one sketch. 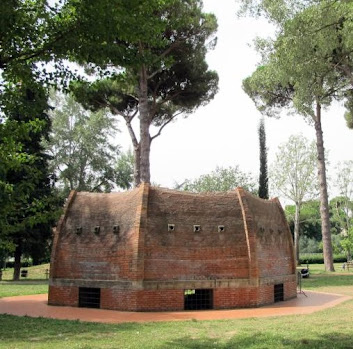 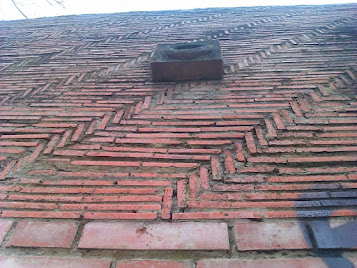 So how, exactly, did Brunelleschi build the great dome – still the largest masonry dome ever constructed – without wooden centering? What kept the bricks from falling as the structure was built? Well, that is an excellent question, and people have been arguing about it for centuries. In keeping with his manic secrecy, Brunelleschi left no plans or drawings. The only surviving drawing of the dome under construction was made by an enemy who was trying to discredit Brunelleschi by showing that his methods could never work; some historians think he was mostly right in describing the process, and some think he was mostly wrong, but nobody thinks he was entirely right since, after all, he said the thing was bound to collapse long before it was finished. The one thing everyone agrees on is that Brunelleschi's use of the brick pattern called in Italian Spina Pesce, and in English herringbone, was part of the secret. The picture above shows what this looks like on the 1/5 scale model Italian scholar Massimo Ricci has been building in a Florentine park. The idea is that the spiraling sections of vertical brick broke up the shear planes along which the brickwork might have failed. Also, if the vertical bricks went in first, as Ricci thinks they must have, then the horizontal bricks would have been wedged between them, keeping the bricks from falling. 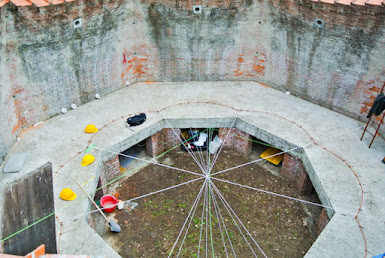 There is an interesting Nova episode (available on YouTube) about the dome that focuses on Ricci's work, with cameos by some American bricklayers who talk just like guys from New Jersey but obviously know a lot about masonry, and you can see in detail how he imagines the process. But searching around I have not found a single other scholar who agrees with Ricci's approach, so it remains just one theory. 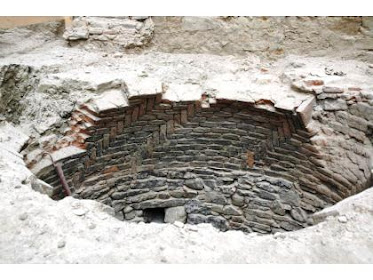 An archaeological discovery made in 2012 sheds a little light. This is a small dome, found under a Florentine parking deck a block from the cathedral, apparently built at about the same time as the large one. You can see that it uses the same herringbone brick pattern. The best guess is that this was a demonstration project, made by Brunelleschi to convince his employers, and perhaps also his masons, that his method would work. 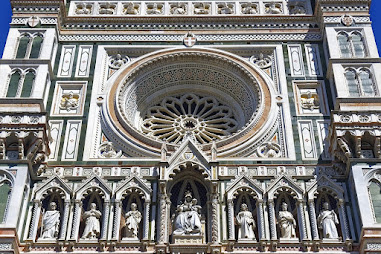 But somehow Brunelleschi did it. Was he some sort of visionary genius who intuitively understood the forces involved? Or was he just lucky? 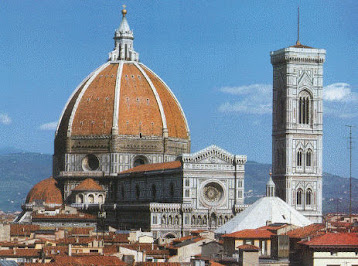 I forwarded this wonderful post to an architect friend. His reply:

In my architectural history class located in Le Corbusier’s Carpenter Center of the Visual Arts at Harvard University under the auspices of the Harvard Graduate School of Design the theory in 1972 was:

Brunelleschi brought an egg to the interview. He cracked the egg, emptied its contents on the floor and placed the more pointed half of the shell on the table - pointy side up. He then asked the interviewers to place their hands on top of the egg, press down and try to break the egg. None could do it.

The egg supported the force with no side supports, no buttresses. It was an internally cohesive membrane that spreads all the forces - both vertical and lateral - throughout the entire shell so that no one single point has to take a “point load.” (On your veranda where beams or trusses rest on a column - a post - the column is taking a “point load.”)

The overall brick pattern - including the herringbone - helps create a membrane-type strategy that spreads the load. So do the internal cross connections within the two layers of the dome. An egg shell is made of outer and inner membranes. See attached. Note the similarity between the shoe of the pointy end of the egg and Brunelleschi’s dome. It’s possible that even the air space and its humidity within the membranes calibrate so as to act as a “lubricant” to keep the masonry “skins" and wood structural members pliable to move around ever-so-slightly as they spread the loads.

How did Brunelleschi intuit all this? I don’t know. How did I intuit the cantilevers at the Phoenix Convention Center? I don’t know. At least I had some engineers who could prove that it would work.

Doing a “mock-up” is always a good idea for an innovative architectural idea whether structural or environmental. I had a mock-up made for the column/beam joint at the cabin - the "screw & glue" joint - and jumped up and down on it to test it. I did a sixty-feet long, twenty-feet high glass wall that contained all five curtain-wall types for the Anaheim Convention Center and blasted water at it with several fire hoses and high-speed fans simultaneously to determine if it would leak. Frank lloyd Wright famously piled sand bags at five times the projected load on a mock-up of a single “mushroom column” at his Johnson Wax building before it finally crushed.