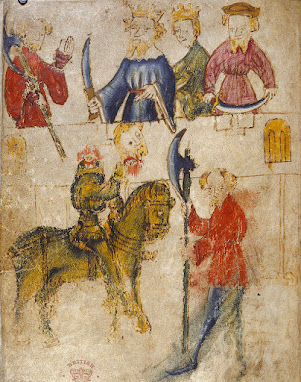 The first time I read Sir Gawain and the Green Knight, at 18, I thought it was stupid.

When I re-read it 15 years later, I found it fascinating. The story is certainly stupid, but the meta-story is something else. The plot is a game within a game within a game: a quest imposed on Gawain, which is part of a trick being played by Morgan le Fey on Guinevere and Arthur, which is in turn part of a world where everything is a contest for fame and glory. Arthur takes us to that world in the first lines, when he announces that they can't start the Christmas feast until something adventurous happens. But at the same time, the world seems magical and, I don't know, eldritch; the landscape these rather silly people move through has magic in its soil, and these tricks may somehow be echoes of ancient, deep, and terrible stories.

I would say that the world is halfway between that of Beowulf and that of Don Quixote; the whole thing is crazy, but instead of laughing we are swept along by the sheer weirdness of the action and the seriousness with which Gawain approaches his ridiculous task. Never mind that the whole thing is contrived and pointless, called a "game" by Arthur right at the beginning; Gawain is still determined to see it through and prove his courage. And maybe the echoes of epic battle and pagan sacrifice indicate that there is some value in the gesture, some repetition of a timeless quest by a timeless hero. 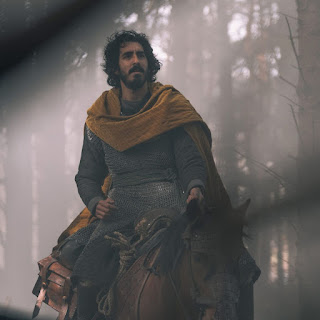 So now there is a movie, The Green Knight, directed by David Lowery, and starring Dev Patel as Gawain. I saw it and thought it was ok.

It is visually fascinating, both in the overall look and in many individual images. There are some good creepy bits, and moments of beauty. It has some ok magic. There is a nice side trip into a famous folk tale.

There are two things that bothered me about it. The first is that the whole structure of the trick has been changed; instead of a petty little attack by Morgan le Fey on Guinevere it is a completely different trick being created by a different person for an altogether more serious purpose, which undermines the thing that now fascinates me about the medieval story: the sense that chivalry is a pointless game people play for fun and honor, but that somehow still echoes grim old epics. This is also shown right at the beginning, for reasons I still don't understand; in the story you have to read to nearly the end to find out what is going on.

Second, the movie's Gawain is one of those utterly unbelievable modern takes on a medieval character. This Gawain is a womanizing drunk, which is ok, there were plenty of noble womanizing drunks in the Middle Ages. But he has a common girlfriend who thinks she might become his wife, and he furthermore does none of the things that even drunken, womanizing noble sons had to do, like train with weapons and boss around servants. Plus, he's a coward. In the world of the Arthurian stories, there is zero chance that Arthur's nephew could be like this.

I thought, from the way it was advertised, that the film would tend toward horror, playing up the creepiness and the fear; but the revelation of the trick at the beginning undermines any fear for Gawain's life. The Green Knight isn't very scary, and a lot more could have been done to make the others Gawain meets along the way creepier. So in the end it isn't very scary at all.

I'm not sure what it was, other than pretty and distracting. But it might still have been the best new (to me) movie I have seen in a year or more. I guess I'm just hard to satisfy these days.