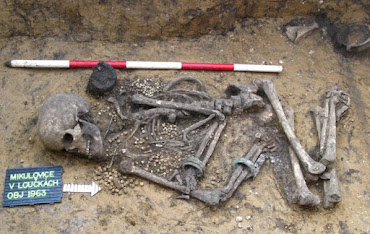 There's a big new paper this week from the Max Planck Institute ancient DNA group, based on 271 ancient genomes (206 of them new) from western Czechoslovakia dating to between 5000 and 1000 BC. Their basic argument is that besides the two big, well known migrations, the arrival of Middle Eastern farmers around 5000 BC and the arrival of Indo-European speaking steppes people around 3000 BC, there were other genetic shifts that probably represent more migrations.

They identify three different Neolithic populations, each mixed with the Hunter Gathers of a different part of Europe, that seem to have vied over this territory and shifted dominance over time.

And then there were further changes after the Indo-European speakers arrived. One interesting change is that the early Corded Ware people had five different y-chromosome lineages, but by 500 years later only one lineage survived, meaning that one clan of men completely ousted or outbred the others. But the people of the Early Bronze, c. 2000 BC, were different yet again.

Anyway the genetic history of Europe continues to get more complicated, with more evidence of conquest, movement, and mixing. Old notions of populations and cultures that developed in place over thousands of years have collapsed.