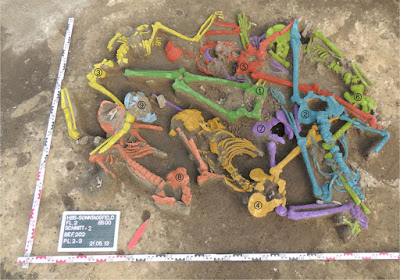 Near Halberstadt in Germany's Saxon-Anhalt, an area rich in Neolithic sites, archaeologists have excavated a pit containing nine skeletons. The bodies had been dumped unceremoniously into the pit, as the color-coding of individuals in the picture above shows. Seven of the skeletons were definitely male, one probably male and one probably female. All were adults or older youths, none over 45. The burial took place around 5000 BCE, at the end of the early Neolithic period. 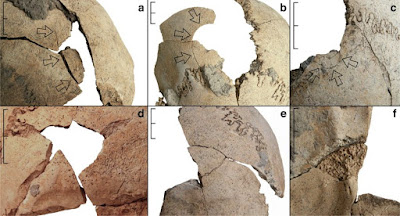 All nine victims died of repeated massive blows to the back of the head. Most also had other wounds, such as broken limbs and ribs. This looks like a massacre of war captives.

The same site has so far produced 38 normal burials, likely of the residents. Elemental analysis of the bones showed that the victims in the massacre pit were probably not local: they had different levels of strontium and different isotope rations of carbon and nitrogen than the more normal burials. Some news stories have played up this angle with headlines like Skeletons Of Executed Immigrants Found In Neolithic Mass Grave in Germany. But the data don't show that the victims were members of a different culture, just that they grew up in a different valley. Indeed there is little evidence of major cultural difference within the German Neolithic; to archaeologists all these people belonged to the Linearbandkeramik or LBK culture.

The Halberstadt massacre adds to the growing body of evidence that the end of the Early Neolithic in central Europe was a time of great violence: the headless bodies in the Virgins' Cave, the mass cannibal feasts at Herxheim, other massacre pits at Asparn, Talheim and Kilianstädten. Archaeologists have known for decades that the end of the early Neolithic around 4900 BCE saw a major collapse of the population, although the reasons have never been clear. Perhaps climate played a role, or perhaps the way the first farmers colonized this region was somehow unsustainable and led to the depletion of key resources. Whatever caused the collapse, all the shattered skulls and gnawed bones make a strong case that it was accompanied by extreme violence.

I want to emphasize again that if these were wars, they were fought between people of the same race and culture. At that time there were people in Germany with a very different culture, descendants of Mesolithic hunter-gatherers who still dominated in the far north, but so far as we know they had no part in the violence of that time. It was LBK against LBK, and often it was fought to the death.
Posted by John at 8:27 PM

But what does it mean, in this case, for these people to be "part of the same culture"? What does that have to do with anything?

Surely two neighboring tribes that speak the same language, although using the same technologies and production methods, although worshipping the same gods, although practicing the same rituals and ceremonies, and even employing the same styles of art and artifice, could be utter enemies purely because of tribal bickering.

How broadly are we defining this "single" culture, and why does it matter? Is this akin to Italian or Greek city states feuding? Is it even more narrow, such as Protestants and Catholics within a single town trying to cut each others' throats? Is it even less clear cut than that, such as the descrimination in France against Cagots? And whichever it is, why are we emphasizing it so strongly here?

Not a comment on this post. A more general comment - thank you for all I have learned or been aroused to following your blog. Always interesting, eminently informative and a pleasure, like a lucky dip, unwrap the latest gem.