Immigration and the World Cup 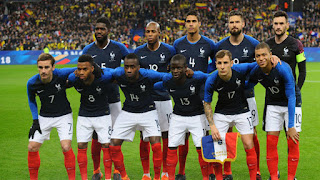 One nice thing about World Cup soccer is that it's the one time millions of people in Western Europe are happy about immigration. Consider the line-up of the French national team, which includes:

These men mostly hail from the concrete banlieues in the outer suburbs of Paris, places usually in the news for terrorism or riots but also one of the world's great hotbeds of soccer talent.

No other country has a team so dominated by the children of immigrants as France, but Belgium will play Mousa Dembele and Romelu Lukaku, England's 23-man squad has Dele Alli and ten Afro-Carribbean players, and Mesut Ozil is by far the most popular Turk in Germany.
Posted by John at 10:42 AM

It's the European equivalent of African American football players.

The rich white old men who own sports franchises love being able to exploit players to make millions off of their physical prowess, but only so long as they keep quiet and toe the line of not speaking out about racial injustices.