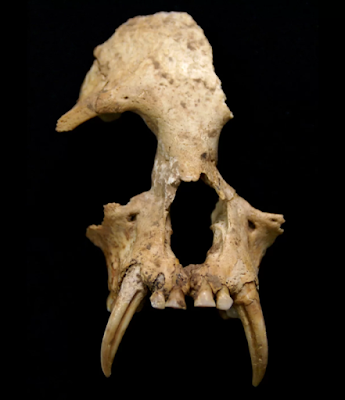 Extinct species of gibbon recently discovered in the 2,300-year-old tomb of Qin Shi Huang's grandmother. Scientifically interesting because we don't know of many species of mammal that went extinct between the end of the Ice Age and the modern era, but this one clearly did.

Plus, what an awesome photograph.

Incidentally Lady Xia's tomb contained more than just the gibbon. There were twelve pits filled with animal remains, including a leopard, a lynx, a black bear, a crane, and numerous domesticated specimens. Noble Chinese of the period were sometimes buried with exotic animals, but Lady Xia was still extreme in the number and variety of her grave companions, so  maybe she was as weird as her grandson.
Posted by John at 7:45 PM