The Latest Pew Survey on Religion in America

Pew is out with the detailed report of their 2014 survey on religion in America. Their last survey was in 2007, and the report compares all the current numbers to those. The two headline numbers are that 89% of Americans believe in God, down from 92%, and that 23% are religiously "unaffiliated," up from 16%. "Unaffiliated" just means that these people do not consider themselves members of any particular religious faith; 61% of the unaffiliated believe in God. 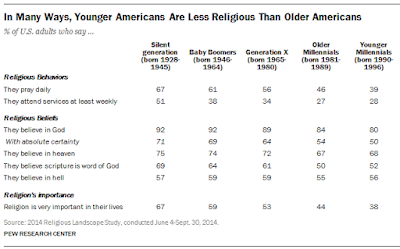 The big news in sociological and political terms is that by every measure young Americans are less religious than their parents. On the other hand, most Americans still consider themselves Christians and practice their faith to some degree.

What's with the young Millennials who believe in Hell but don't consider religion very important in their lives? This strikes me as a major contradiction. Maybe they believe in Hell but think it is only for serial killers and evil dictators, so makes little difference to them. But still.

Here is another interesting graph, showing that while there are major differences between religious groups in their acceptance of homosexuality, the members of almost all groups are becoming more accepting at about the same rate.
Posted by John at 7:40 AM

Sometimes I wonder that so many people still seem to believe so strongly in the obviously biased writings of a bunch of militant Bronze and Iron Age desert dwelling patriarchal xenophobes. This despite people today living in a world built overwhelmingly on science and reasoning, which one would assume would lead them to contrast what their ancient scriptures say with what they know of the world and what logic leads them to understand.

If you told them their toaster was magic, they'd laugh at you as an imbecile.

But if you tell them that their particular deity and body of legends, out of all the untold thousands of deities and bodies of legends humanity has invented for itself, isn't just mythology but actual fact, and you can prove it by citing a collected book of wildly contradictory texts, written by dozens of different authors with vastly differing agendas and worldviews, in multiple languages, across a span of a couple thousands of years, in a backwater region of the ancient world back when we literally still thought the stars were glowy jewels set into the dome of the sky, they nod their heads in total unthinking agreement.

And then if you try to use essentially the same logic to argue in favor of a different deity, perhaps Thor or Amaterasu or Khrishna or Ba'al, they suddenly go back to laughing at you like you're an imbecile.

I'm agnostic rather than atheistic. I've got nothing against faith and myth. But I feel that if we're going to embrace belief, it has to be in something worthy - some tradition which isn't so overwhelmingly irrational, biased, and inherently problematic. I'd be fascinated to learn if there is or is not some sort of "greater force" in the universe, although I don't believe we ever will, and I certainly don't believe if we do it will in any way resemble our human-centric self aggrandizements and notions of "gods".

I know I probably shouldn't marvel at the stubborn persistance of our current flawed faiths. Bad habits are hard to break, and we've got thousands of years of cultural baggage that we're stuck toting around. Sorting through it is likely going to take centuries at minimum. But you'd think people that the most basic of logic would make a greater impression of people than it appears to, particularly when they accept it readily in other areas.