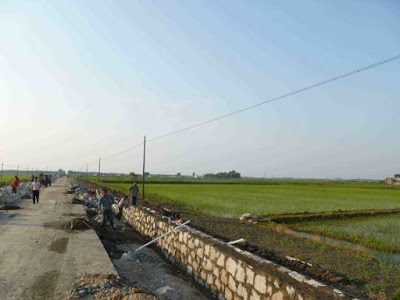 Michael Meyer met and married a Chinese woman from a Manchurian village called Wasteland, and ended up writing a book about his time in her hometown. She actually doesn't live there any more; like any other ambitious Chinese person, she has moved to a big city. Just as in the American midwest, family farms in China are slowly being absorbed by big agribusiness companies, and most young people are moving away. From Adam Minter's review:

Lake Wobegon, if it really existed, would have ceased being a small town with bachelor farmers years ago. Agribusiness, corporate farming, and the understandable wanderlust of Minnesota’s rural youth has transformed Central Minnesota (ostensibly, the location of Lake Wobegon) into a very different place. It’s easy to mourn for the end of rural America — in a sense, that’s what Garrison Keillor does whenever he spins a new yarn about the bachelor farmers. But as Keillor well knows, the Norwegian bachelor farmers aren’t coming back, because in 2015 one-man farming operations don’t make economic sense.

Wasteland is still in its Lake Wobegon stage, but just barely — a state of affairs that Meyer learns about first-hand while teaching in Wasteland’s school. There, he met students with mobile phones, internet, music downloads, and the natural wanderlust inspired by Chinese modernity. But even if the kids wanted to stay in Wasteland, their farmer parents wouldn’t hear of it. . . .

But who, then, will farm the fields of Wasteland? Who will preserve the traditional squat homes in which Frances was raised, her relatives still live, and Meyer rented during his sojourn? The blunt answer is: nobody. As Meyer witnesses during his years in Wasteland, China is at the start of a new round of land reform. Whereas in the past, ownership of land went from private owners to the public, now it’s on the verge of shifting to corporations who will farm it — and pay royalties to those who once farmed it individually.

In Wasteland, the vector is Eastern Fortune — a private company that cultivates and processes organic rice. They enter into contracts with local farmers to lease their land and farm their crop in return for a royalty. As part of the deal, they also get to demolish the farmer’s home (more land for farming) and move the entire family into a high-rise apartment. It’s a radical transformation — going from cultivating your own food, to buying it at stores, for starters — and Meyer is troubled by it. Nonetheless, some of Meyers’s friends and relatives begin to accept the transaction, and the change it brings. In a key, climactic scene, an executive from Eastern Fortune suggests to Meyer that the change is inevitable — and perhaps the town could change its name to Eastern Fortune. 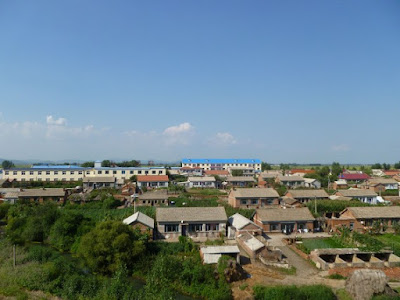 Family farms are still thriving in some parts of China, especially areas close to cities where there are big markets for vegetables. But the family wheat or rice farmer will soon be a figure of history and myth. 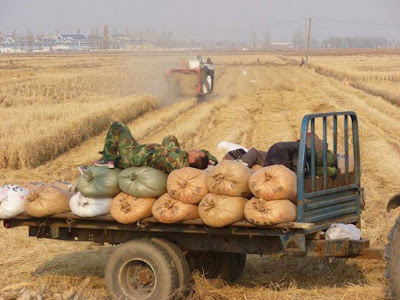 The pictures are all of Wasteland, by Michael Meyer, from here.
Posted by John at 12:39 PM