Italian Futurism was one of the prototypical modern movements in art, launched with a manifesto, contemptuous of everything that came before, deeply connected to radical politics. The futurists were obsessed with speed, technology, violent action, and youth; the standard subject of a futurist work is a fast-moving machine like a train, an airplane, or a motorcycle. (Ivo Pannaggi, Speeding Train, 1922) 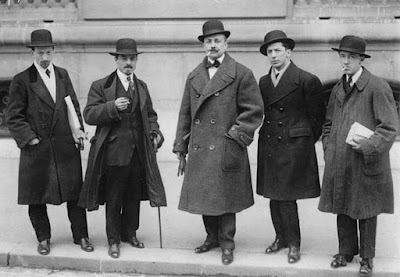 The movement was founded in the industrial city of Milan in March, 1909, when the poet Filippo Tommaso Marinetti published his Futurist Manifesto.


He was soon joined by the painters Umberto Boccioni, Carlo Carrà, Giacomo Balla, Gino Severini and the composer Luigi Russolo. Marinetti expressed a passionate loathing of everything old, especially political and artistic tradition. "We want no part of it, the past", he wrote, "we the young and strong Futurists!" . . . They repudiated the cult of the past and all imitation, praised originality, "however daring, however violent", bore proudly "the smear of madness", dismissed art critics as useless, rebelled against harmony and good taste, swept away all the themes and subjects of all previous art, and gloried in science. 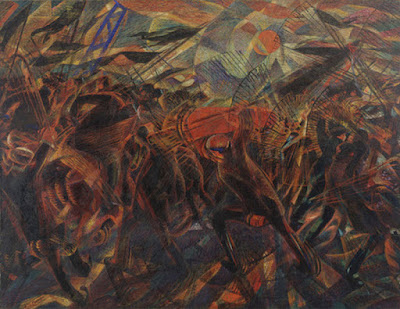 The themes of the Futurists are the themes of the hard-hearted men who launched the twentieth-century world: Lenin, Stalin, Mussolini, Henry Ford, Albert Speer, Howard Hughes, all of them worshipers of technology and speed, scorners of the past. (Carlo Carra, Funeral of the Anarchist Galli, 1911) 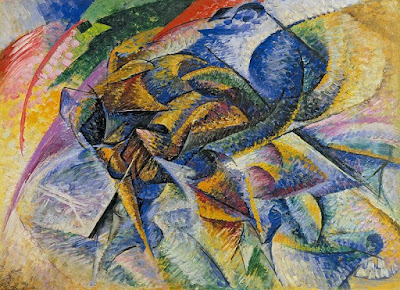 Many of the futurists ended up as Fascists, but the movement did not exactly fit with Fascism's sentimental nationalism or evocations of Rome. No movement of sincere artists ever fits neatly into political categories, and something like the love of fast cars cuts across all political and social lines. But I have long been impressed by how widespread these attitudes were in that time, and I think they are crucial to explaining the awful catastrophes of 1914-1945. Everywhere you look you find impatience with limits and rules, a longing to strike out in entirely new directions, a dismissal of tradition, a belief that the old, corrupt system needs a violent shock. Physicists cast away everything they thought they knew about matter and energy; industrialists embraced radical technologies; architects built giant skyscrapers and dreamed of even bigger buildings that would be cities in themselves; social reformers imagined doing away with the family and everything that went with it. (Umberto Boccioni, The Dynamism of the Cyclist, 1913). 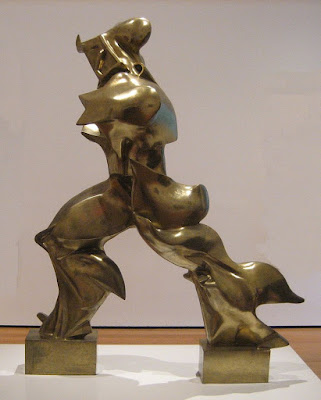 One of the most famous Futurist works, Unique Forms of Continuity in Space by Umberto Boccioni.

I cannot imagine either Fascism or Soviet Communism without the sneering, tough-guy dismissal of everything old, sentimental, feminine, careful, peaceful, and quiet that Futurism embodies. Americans often compared Nazi leaders to gangsters, and there were similarities; both held up the middle finger to rules, and laughed at cries for fairness or pity. (Benedetta Cappa Marinetti, Speeding Motorboat, 1923)

Futurists loved cities; it is was in New York, Milan, Chicago and other modern Metropolises that they found the cruel energy they admired. (Ugo Pozzo, Cosmopolis, 1925) 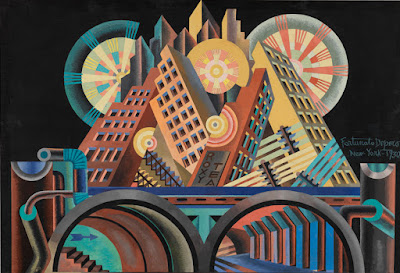 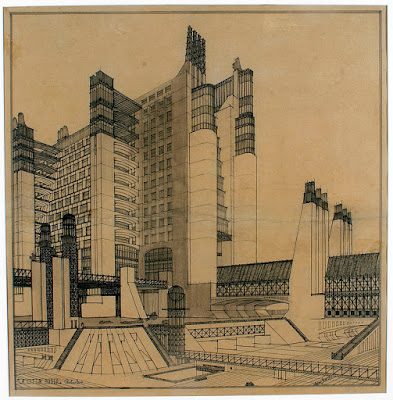 So of course there was Futurist architecture, although nothing much ever came of it, and it merged rather quickly back into the general train of modernism. (Design for an apartment complex by Antonio Sant-Elia, 1914) 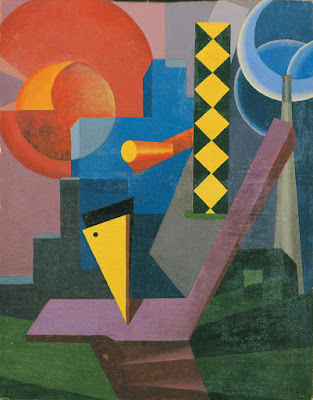 Many Futurists were much influenced by Cubism. The Guggenheim staged a big international show on Futurism a few years ago, and I thought a lot of which they included just looked like Cubism. But then I always have trouble spotting differences between artistic movements that seem obvious to other people. (Fillia, Mechanical Landscape) 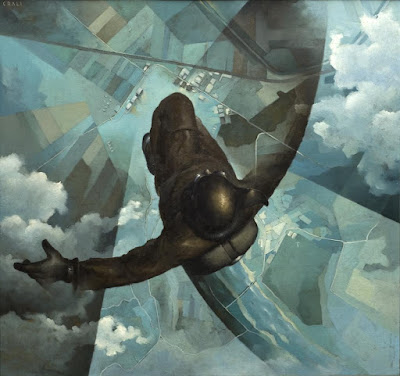 The futurists were mainly young men when they launched their movement, so they endured long past the time we associate with them. Some, as I said, embraced Fascism, but others slid out of politics as the cataclysm of World War II approached. (Tulio Crali, Before the Parachute Opens, 1939) 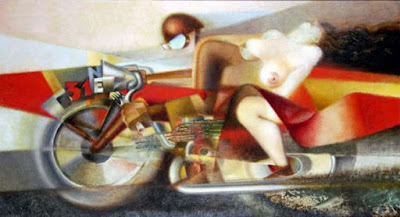 Here is something I never saw before I started working on the post, a Futurist work dated 1968. (Ivo Pannaggi, The Rape of Europa) 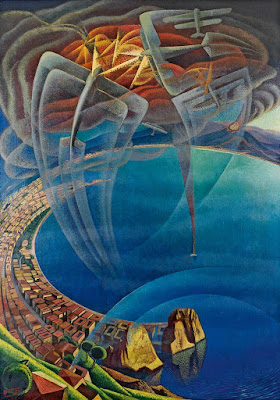 As to what I think about these works, I am ambivalent. Some of them have a marvelous verve and a powerful raw energy -- but then one could say the same thing about Lenin, or many fascists. While I can respect the drive toward invention that led to the technologies that make my life comfortable and interesting, am too sentimental and too besotted with the past to really admire that attitude, or these works. They look too much like a prefiguration of Blitzkrieg. (Gerardo Dottorii, Aerial Battle of the Gulf of Naples, 1942)
Posted by John at 9:44 AM