A Game of Liu Bo 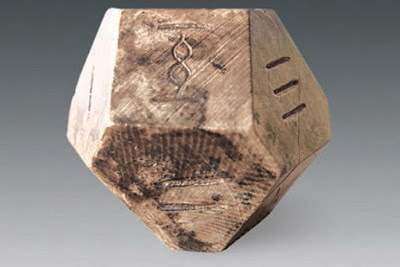 Chinese archaeologists have excavated a grand noble tomb dating to the Warring States period, around 2300 years ago. 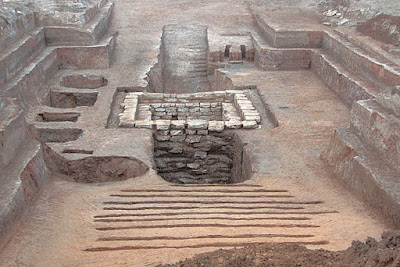 View of the tomb after excavation. This is in Qingzhou City, within the ancient kingdom of Qi. The tomb was robbed of gold and silver not long after it was dug, but the robbers left behind many things not very valuable to them but very interesting to us. They also left behind one of their own number, since a skeleton was found in the tunnel dug by the looters, probably killed when it collapsed on the party.

The discovery that made the news was a complete set for playing the ancient game of Liu Bo, or Bo. Above and at top is the 14-sided die, which had two blank sides and the numbers 1 to 6 written on two sides each. You can see that since there is no regular 14-sided polygon, the die is uneven and would not have been truly random.

A drawing of the wooded board, which was excavated in fragments. 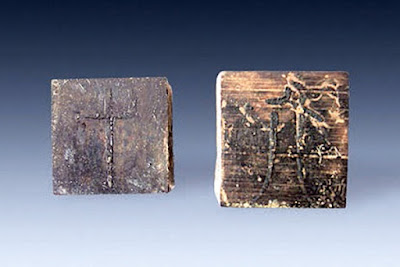 Two of the 21 gaming pieces found. They are marked with numbers. The game seems to have died out during the Tang dynasty, 1500 years ago, and nobody knows exactly how it was played. But there are hints:


A poem written around 2,200 years ago by a man named Song Yu gives some idea as to what happened. "Then with bamboo dice and ivory pieces the game of Liu Bo is begun; Sides are taken; they advance together; keenly they threaten each other. Pieces are kinged and the scoring doubled. Shouts of 'five white!' arise."