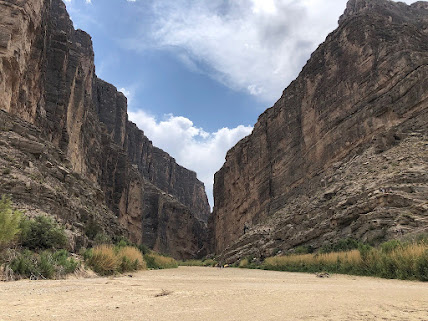 Due to a long-term drought and water drawn off for farming, the Rio Grande now dries up completely in Big Bend National Park almost every winter. That's the riverbed above.

Lidar reveals town sites in the Bolivian Amazon with mounds, causeways, and reservoirs, more evidence of pre-Columbian civilizations in the Amazon region.

Very negative review of the prospects for fusion energy, especially of the magnetic confinement (Tokamak) variety. Among other things it says that people talk about the "break even point," where a fusion reaction puts out as much energy as it takes in; we have yet to meet that threshold for longer than a microsecond, but if fusion is ever going to work the output has to be at least five times the input, since four-fifths is uncapturable.

Tyler Cowen on the paradox of auction happiness.

Project Innerspace is a nonprofit that aims to create exponential growth in geothermal power by 2030. Geothermal backers are feeling increasingly bullish, due to new drilling technologies pioneered during the American fracking boom, and I am seeing promotional material everywhere. Big money is being invested, in particular by oil companies. Still not a lot of power generation, but compared to say, fusion, geothermal is real and may actually be poised for a boom. Which would be wonderful for all of us. (Project Innerspace web site, 15-minute CNBC video)

Peanuts came to North America from Africa in the 18th century. But they are native to Bolivia and went to Africa from Mexico in the 16th century.

Among the Mongols almost all the men were soldiers, which was possible because the women did everything else.

Doctors report success in one of two patients with pancreatic cancer by modifying the patient's T cells to recognize and attack the cancer. Very cool "proof of concept" but far from being ready for widespread use. (NY Times, NBC News)

The problem with our gerontocracy, says Yuval Levin in the NY Times, is that people like Biden, Pelosi and Trump see America through the arc of their own lives – the stable, wholesome 50s, the exciting, turbulent 60s, the booming 80s. They fight over which decade we should go back to instead of how to move forward. I think he has a point, but I would say that young leaders are not taking over more decisively because they (Macron, Trudeau, Kamala Harris) have no new vision to offer. We keep refighting old battles (race, immigration, taxes, health care, gun control, conservation) because we don't know what else to do. Levin wants younger leaders, but without new ideas, what difference will fresh faces make? Honestly, how many new ideas have you heard in the past decade that you want to see implemented faster?

The Czech Republic chooses an aggressive young (47) Russia hawk to lead its army.

Austrian military briefing on the fighting in Donbas, 16-minute video in English from May 31. Says situation is "critical" for Ukraine.

What modern soldiers actually do. Well, this and hide from shells and rockets.

Tom Friedman says Russia did not attack Ukraine, Russia attacked Europe. The sense among many Europeans that Europe has been attacked explains the violent reactions to the invasion (NY Times)

Institute for the Study of War assessment for June 1, with notes on Ukrainian attacks toward Kherson.

The choices forced on the Russian army by a shortage of soldiers: "many Russian motorized rifle squads have only enough soldiers to operate their vehicles, but not to dismount and fight on foot."

British Intelligence summary for the 100th day of the war.

Satirical Russian post on what happened to the 35th Army at Izium.

Re: Russia attacking EUrope - can't speak for other countries, but definetely the sense in Poland - expressed in forums, by journalists, analysts etc - is that Ukrainians are bleeding our common enemy and that this is our war - that it's better when our howitzers, tanks and drones are fighting THERE instead of here after few years.

Honestly, how many new ideas have you heard in the past decade that you want to see implemented faster?

"New ideas" as a requirement is such a cop-out. People have been suggesting sensible solutions to our problems for decades- but the powers that be just shoot them down and never implement them.

And that makes sense, given that the powers that be are all around the age of 80, on average. They don't WANT "new ideas" - they want old ideas, the same old ideas that have been the cause of reflexively blocking those "new ideas" for half a century until they're no longer new, and can thus be written off as "tired old ideas that don't work" despite no one ever actually trying them.

That's the difference - we don't need "new ideas", we need "things we haven't tried". But until the powers that be die off and get replaced, we'll continue to refuse to try "new things" (even if those things aren't "new ideas" anymore).

Sounds to me like Levin ("a senior fellow at the American Enterprise Institute") is shilling for DeSantis (age 43).

A perfect example of a younger leader with no new ideas.

True, but if you were shilling for him, would you mention that?