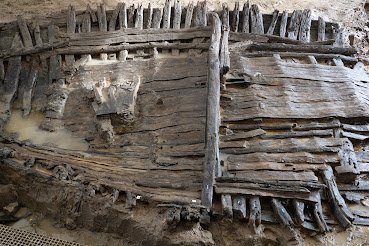 A small ship (c. 50 feet, or 15m long) unearthed in Villenave-d’Ornon France, near the Atlantic coast, dating to the 7th or 8th century AD. Image above. As INRAP notes, this is a period for which little is known about French seafaring. In French but Google Translate is good at French.
Vox interview with Timothy Snyder about Ukraine and the future of democracy, very interesting.

BBC precis of Progress Studies, the people trying to figure out what causes technological and economic progress, and how to accelerate it.

Evidence of cultivated olive trees in the Jordan Valley, around 5,000 BC.

A possible connection between parenting styles and political attitudes, although I can only read the abstract and from that I suspect this study depends a lot on the definitions of words like "paternalism."

Excellent summary of the career of Casanova, in case you were ever curious. (The New Yorker)

National Weather Service Storyboard for the 50th anniversary of Hurricane Agnes, one of America's most destructive natural disasters and one that had big impacts both on where I lived at the time (Richmond, Virginia) and where I live now (Oella-Ellicott City, Maryland).

I somehow made it to the age of 60 without ever hearing Tennessee Ernie Ford's "Union Dixie."

What does simultaneous discovery (Newton and Leibniz with calculus, for example) tell us about discovery and invention writ large?

Ukrainian Harpoon missiles strike a Russian navy tug on its way to Snake island, shown in a video shot from a drone.

On June 17 a Ukrainian official said they have lost lost 1300 armored fighting vehicles, 400 tanks, and 700 pieces of artillery. Nobody knows whether to believe them, since they are pushing western nations so hard to supply them with more; an unnamed US official was quoted this saying "what they're saying in public and what they're telling us in private are not the same." On the other hand, what nation in war ever admitted to more losses than they had suffered? Incidentally he Oryx list is showing 194 tanks, 304 AFVs, and 98 artillery pieces.

And an 8-minute video of a Ukrainian artillery crew in action.

Igor Gurkin says the May-June Battle of the Donbas is coming to an end as a draw. The war will go on, but in other places.

Mark Hertling (retired US general) says that the stalemate in Ukraine will end when Russia runs out of men.

Ukraine withdraws its troops from Severodonetsk, ending that fight.

I somehow made it to the age of 60 without ever hearing Tennessee Ernie Ford's "Union Dixie.

What a shame that this song isn't better known. It feels like this version should have emerged from the Civil War as the definitive version of the tune.

"I have always thought `Dixie’ one of the best tunes I have ever heard. Our adversaries over the way attempted to appropriate it, but I insisted yesterday that we fairly captured it. I presented the question to the Attorney General, and he gave it as his legal opinion that it is our lawful prize." - Abraham Lincoln, April 10, 1865