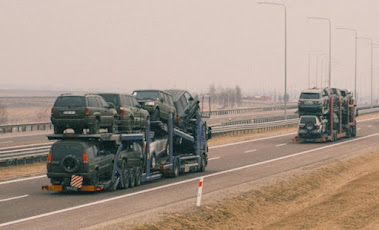 Fascinating story in the Washington Post today on the volunteer effort in Lithuania to raise money and collect supplies for Ukraine. Among other things they have collected hundreds of SUVs and pickup trucks, donated or sold at discount prices. One Lithuanian donor said, "We have no choice, they are fighting for us."

The convoy was carrying 45 vehicles — retrofitted Jeeps, ambulances, an armored bank truck and an army field kitchen — as well as 24 tons of diesel. It had traveled overnight from Lithuania as part of a swelling supply network racing to catch up with the return of war to Europe. More than a dozen volunteer drivers, including one whose relief work was normally limited to helping motorists stranded on the highway, had driven hood-to-taillight almost around-the-clock to rendezvous with Ukrainian fighters.

While governments negotiate over fighter jets and high-end weapon systems, soldiers on the ground are struggling to fill more basic needs. With Ukraine’s own factories shut down by shelling, its forces rely increasingly on volunteer, pop-up supply chains like this one for vital gear, including body armor, medical supplies and the pickup trucks and SUVs they covet as fighting vehicles.

A second convoy was scheduled to arrive later in the day, packed with generators, radios, surveillance drones, night-vision gear and, most coveted of all, almost 7,000 bulletproof vests and helmets. For the soldiers, they are a lifeline.

“That is what we need the most,” said Lt. Andrey Bystriyk, one of the many Ukrainian fighters who had traveled across his war-ravaged country to meet the convoys. His blue eyes teared up when he talked about the aid pouring in from neighboring countries.

“From the army, we get the gun and the ammunition and the uniform,” he said. “But under the uniform, what we eat, what keeps us safe, how we move around and fight — that comes from the people, our people and foreign people.”

I've been reading a lot of military blogs and the like lately, and one of these guys wrote yesterday about the reforms under way in the US Marines. They have abandoned tanks and cut back on artillery and other armored vehicles, instead spending the money on mobility, missiles, and weapons and equipment for infantry: night vision, other advanced optics, tactical drones, hand-held anti-tank and anti-air missiles, body armor, etc. He said, "Everything that has happened in Ukraine has confirmed the wisdom of this move." Properly equipped infantry is now, once again, the strongest force on the battlefield. And this is what makes volunteer effort so powerful in the Ukraine war: private people can't buy tanks or missiles – not in Europe, anyway – but they can buy night vision gear, body armor, bullet-proof helmets, light drones, and vehicles, all things that multiply the effectiveness of infantry. Not to mention, bandages, fuel and food. 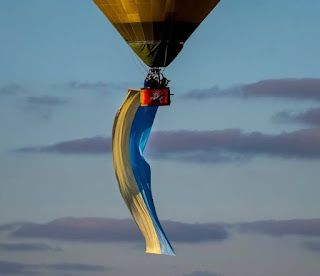 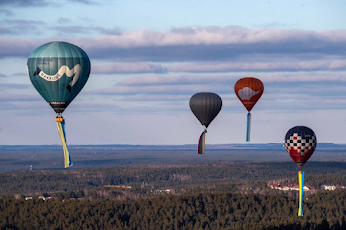 Hot air balloons over Vilnius, Lithuania, March 17
Posted by John at 11:04 AM

Fascinating. I do wonder about that Marine cutback. I remember the military in Iraq was hungry for armored vehicles that could resist IEDs. So armor isn't quite obsolete yet. I wonder if the point of this reform might be to discourage deployment of Marines in long-term frontline and occupation duty. Like paratroopers, Marines are supposed to be light infantry who get replaced when the key moment for them passes. So they may be trying to reinforce that. But overall, the US military is very wedded to its low-to-no casualty model, so I'm not sure unarmored infantry is quite so much the future for the US.