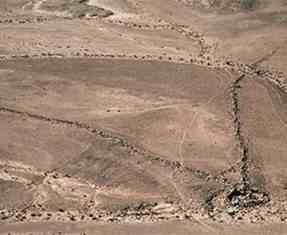 A team of Jordanian and French archaeologists have been investigating the features known as "desert kites," which are essentially converging pairs of stone walls. Some lead to a walled enclosure, but some just come to a point. The reigning theory is that these are traps used in hunting wild gazelles. Not everyone agrees with this, because some are also closed off with walls on what should be the open end, and some seem the wrong size and shape for that purpose. Plus none of the walls are tall enough to actually enclose a gazelle. But anyway it's the best theory. These archaeologists had been trying to date these features, and using radiocarbon and OSL dating they found that some are 9,000 years old. Potsherds of this period have also been found in the area. 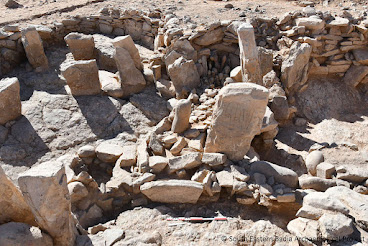 Anyway, while they were carrying out these studies in a place called Jibal al-Khashabiyeh they stumbled across what they are calling a "ritual complex." The complex includes round, semi-subterranean structures, stone stelae, ritual deposits, and even what they say is a small stone model of a desert kite.

The installation was constituted of two standing steles with anthropomorphic representations. The tallest of the two (ca. 1,12 m high) also bears a depiction of a "Desert kite" intermingled with the human figure. The second standing stone (ca. 70 cm high) exhibits a human figure with finely carved details. Behind the two standing stones, a structured deposit was unearthed. It was composed of nearly 150 marine fossils, many of them were carefully arranged, set vertically and following a specific orientation, along with a variety of stones of natural unusual shape, as well as a number of uncommon worked artefacts, including animal figurines and exceptional worked flint objects. The various finds, in addition to a ritual altar stone associated to a hearth, were organized within a reduced model of desert kite, built with stones in the middle of the campsite. This is the only architectural model of its kind known to date worldwide in a Neolithic context. 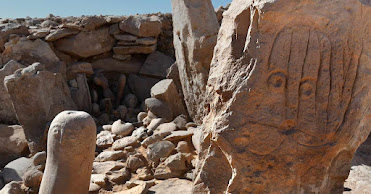 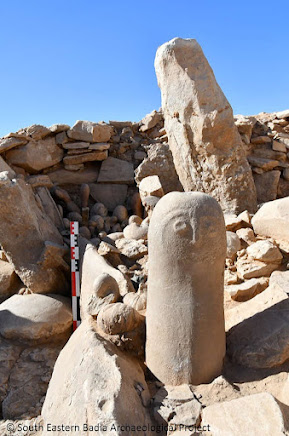 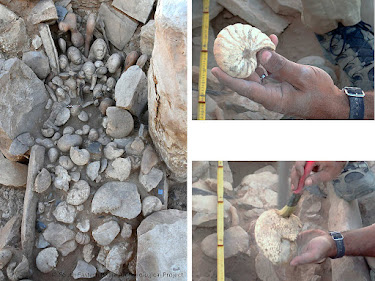 The deposit of fossil sea shells is particularly fascinating. Because so far as the excavators can tell, these rituals were tied to hunting using the desert kites:

The ritual nature of the deposit is compelling including an unexpected use of natural marine fossils in the symbolic and spiritual realm through the Neolithic. The altar and associated hearth suggest that some kind of sacrificial offerings must have been involved in the ritual process. The reminiscence of symbolism referring to the “Desert kites”, evidenced by the depiction on one of the steles and even more in the three dimensional architectural model at the core of the installation indicates that mass hunting using the “Desert kites” was at the root of the ritual activities involved. The sacral symbolism and ritual performance evidenced were most likely devoted to invoke the supranatural forces for successful hunts and abundance of preys to capture. In this respect, the discovered installation is not only unique due to its exceptional state of preservation, but also due to the fact that it sheds an entire new light on the symbolism, artistic expression as well as spiritual culture of these hitherto unknown Neolithic populations specialized in mass hunting of gazelles using the “Desert kites”.

A lot of paganism can be described as the spiritual side of whatever it was people did for a living: farming, hunting, fishing. I suspect one reason that religion is fading in the modern world is that it no longer has this connection.

"A lot of paganism can be described as the spiritual side of whatever it was people did for a living: farming, hunting, fishing."

I'm not sure this is quite the right way to put. It seems to me, rather, that religion can have a humdrum, homely side that has to do with ordinary activities, but it also can have a side that's supposed to be extraordinary, about extraordinary contacts with extraordinary beings, etc.--and that these two sides are sometimes in tension with one another.

Ritual hunts were an important part Arabian paganism before Islam and continued thereafter (sometimes "Islamized," sometimes frowned upon by the jurists, etc., etc.). The thing is, this was not how anyone made a living--these were prestige activities, restricted to elites and conducted at ritual times and especially with ritual songs.

Sure, there are other parts to paganism, but I am thinking of things like harvest festivals, or festivals for the start of the fishing season, or for the first day of plowing. It seems to me that a lot of religion (and this also applies to medieval Christianity) was integrated into the working year in a way that modern Protestantism is not.

It would be interesting to know at what point desert hunting ceased to be a mainly economic activity and became a mainly social, religious, and prestige activity.

I think it would be hard to find a pre-modern religion that doesn't have a time-to-bless-the-threshing-floor aspect. Even Buddhism does. Basic agricultural practices are certainly integrated into Judaism. Sukkot is literally a harvest festival, and the every-some-odd-years festivals like Jubilees, with their debt-forgiveness rules, have a clear subsistence-agriculture aspect. At Sinai itself, two chapters after issuing the Decalogue, God is giving out rules for things like liability for damage done by animals. There's an extraordinary encounter that plunges right into the ordinary.

Christianity arguably starts with an attack on the very concept of earning a living: the Sermon on the Mount. But of course, the gospels are also full of homely agricultural metaphors and parables (some of which violate peasant common sense, and some of which don't), and Paul wastes little time before bringing the work ethic back in ("the workman earns his keep," etc.).

I wonder in what ways, if any, the Amish and similar austere-Protestant farming groups integrate religion into their agricultural year?

Part of the problem with any modern religion is most of us not-Amish no longer have a common working year in the same way. But American Protestantism has embraced a lot of ordinary activity: consider contemporary southern high school football. Also, getting-ahead self-help books in the Norman Vincent Peale tradition.

Incidentally, it occurs to me that Salafism (=Wahhabism, Deobandism, al-Qaeda, Sayyid Qutb, etc.) is a similarly austere form of religion to Calvinism, making as few concessions to ordinary life as possible. Back during War on Terror times, some pundits said the problem with Islam was that it never had a Reformation--but it did, and Wahhabism and all that followed from that was it.

Before that, Sufism provided plenty of blessing of threshing floors, praying for rain, and so on. Gellner's _Saints of the Atlas_ is good on what he calls, in a nice phrase, "the hum-drum holy man."