Phil Sheridan and the Complexity of Historical Judgment 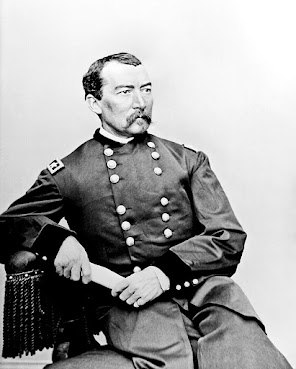 A career US Army officer, he spent most of the 1850s in the Northwest, leading topographic surveys and defending settlers against Indian attacks. Much of his job involved negotiating with Indian leaders, and he came to like them. For a while he lived with an Indian mistress, the daughter of a chief. So far as I can tell he tried to be fair, but after all it was his job to restrict Native Nations to reservations to make room for white settlers, and he did it.

When the Civil War broke out he rose rapidly from 1st Lieutenant to Brigadier General, commanding troops in a long list of battles. Grant, a pretty good judge in these matters, once called him the best battlefield commander in the world. When Grant was summoned east to take charge of the Union army in Virginia he brought one subordinate with him: Sheridan. Sheridan became commander of the Union cavalry corps but his role grew until by the end of the war he was Grant's all around right-hand man and the driving force of the pursuit that ran Lee's army to ground at Appomattox.

Sheridan was one of the hard men of Grant's school, who thought the way to win the war was to fight harder, kill more Confederates, and destroy more of their property. In the Fall of 1864 Sheridan led an expedition into the Shenandoah Valley, which was the main source of food for Confederate troops in Virginia. After defeating Confederate forces in two battles he instructed his men to wreck the valley so thoroughly that a crow flying across would have to carry his own food.

After Appomattox Sheridan was sent to Texas, because Confederate troops there were slow to surrender, and because a Civil War in Mexico threatened to spill over the border. Benito Juarez was leading Mexican opposition to a French effort to install Archduke Maximilian of Austria as ruler, backed by 40,000 French troops; Sheridan was supposed to neutral but later said that he found covert ways of supplying Juarez's men with weapons and ammunition.

During the first years of Reconstruction Sheridan was the military governor of Texas and Louisiana, and he was one of the hardest fighters against neo-Confederate resurgence. Here's a snippet of his wikipedia bio:

On July 30, 1866, while Sheridan was in Texas, a white mob broke up the state constitutional convention in New Orleans. Thirty-four blacks were killed. Shortly after Sheridan returned, he wired Grant, "The more information I obtain of the affair of the 30th in this city the more revolting it becomes. It was no riot; it was an absolute massacre." . . . As military governor  In March 1867, with Reconstruction barely started, Sheridan was appointed military governor Sheridan severely limited voter registration for former Confederates and ruled that only registered voters (including black men) were eligible to serve on juries. After an inquiry into the deadly New Orleans riot of 1866 implicated numerous local officials; Sheridan dismissed the mayor of New Orleans, the Louisiana attorney general, and a district judge. He later removed Louisiana Governor James M. Wells, accusing him of being "a political trickster and a dishonest man". He also dismissed Texas Governor James W. Throckmorton, a former Confederate, for being an "impediment to the reconstruction of the State", replacing him with the Republican who had lost to him in the previous election. . . . If Sheridan was unpopular in Texas, neither did he have much appreciation for the Lone Star State. In 1866 his quip was widely reported: "If I owned Texas and Hell, I would rent Texas and live in Hell."

Sheridan's efforts to reconstruct the South got him fired by Andrew Johnson, so in 1867 Sheridan was sent north to take command of the army fighting Indians on the plains. Realizing that he did not have enough men to defend all the points he was supposed to be defending, he went over to offense:

In the Winter Campaign of 1868–69 he attacked the Cheyenne, Kiowa, and Comanche tribes in their winter quarters, taking their supplies and livestock and killing those who resisted, driving the rest back into their reservations.

The massacre of peaceful Cheyenne known as the "Battle of Washita River" was part of this campaign. Sheridan was in overall command of the Department of Missouri for the next decade, presiding over the wars that destroyed the Cheyenne and Lakota nations.

The world's first National Park, established at Yellowstone in 1872, was part of Sheridan's military territory, and he fell in love with the place. In 1881 he wrote a formal report arguing that the park needed more funding for development (things like boardwalks so people could see the hot springs without damaging them) and a company of cavalry to prevent wanton destruction by loggers, hunters, and trophy takers. The report was ignored. Feeling that his military position prevented him from going directly to the press, he enlisted master publicist Buffalo Bill Cody to draw public attention to the cause. (Love it that this Washington Post article identifies Cody as one of the first "reality stars.")  Sheridan also brought President Chester Arthur to Yellowstone on a carefully managed trip; no reporters were allowed, but Sheridan's staff wrote up daily press bulletins. In the end Sheridan managed to secure the funding he wanted, and when Washington refused to authorize cavalry patrols he just ignored them and sent men to the park anyway.

To my mind Sheridan's career is a good example of what we can expect to see in any major figure of the nineteenth century. He fought for some things I can believe in – Union, abolition, Reconstruction – and he fought hard and well for them. He also reveled in battle to an alarming degree, and ruthlessly sacked officers he thought were too soft, too much concerned about the lives or comfort of their men. He did what he could to promote Reconstruction, including the rights of black men to vote, hold office, and serve on juries. He was probably a racist in the way of most men of his time, but on the questions that mattered he was for equality. Against orders, he helped Mexico fight off foreign domination. He then turned his military talents to the Indian wars, found the weakness of the plains tribes and brought them to heel. One of his last public acts was to insure the future of Yellowstone National Park.

What can we say about him, except that he was soldier of another time?

A career US Army officer, he spent most of the 1850s in the Northwest, leading topographic surveys and defending settlers against Indian attacks. Much of his job involved negotiating with Indian leaders, and he came to like them. For a while he lived with an Indian mistress, the daughter of a chief. So far as I can tell he tried to be fair, but after all it was his job to restrict Native Nations to reservations to make room for white settlers, and he did it.

No amount of "trying to be fair" can compensate for willingly performing a job that is inherently unfair or unjust.

There were slave owners who treated their slaves well - but they still kept human beings as property in bondage against their will. There were Nazi officers who were cordial and polite and even somewhat lenient to the locals in occupied regions - but they still were foreign occupiers upholding a tyrannical, murderous regime.

If your job is to restrict Native Americans to reservations, it doesn't matter one whit if you "come to like them" - you're still willingly carrying out unconscionable injustices against them. And Sheridan was a man who carried out terrible atrocities in the name of doing his job, not just some common soldier stuck "following orders". He knew full well what he was doing - he just didn't give a damn.

However much he "liked" the Natives, it clearly wasn't enough to give him pause in butchering their women and children in surprise winter raids against their homesteads; nor to stay his hand in wiping out the American bison in order to annihilate their entire way of life and starve them to death.

And these are not merely acts which the passage of time has rendered terrible where before they were not - there were people in his own time who condemned such acts quite vigorously, just as there were those in the days of Cortés and Pizarro who condemned the abuses and injustices carried out against the Mesoamerican peoples. Moral men have always known better - it's just that the world, for much of its history, has been run by amoral men and those willing to serve them.

Whatever else he was, Sheridan was not a moral man. A disciplined and dedicated one, perhaps, but not a moral one. The general paucity of moral men in his time does not change or excuse this fact. There were those who knew better, even if he himself did not. His nature as a product of his time does not change the nature of his misdeeds. We are under no obligation to be lenient with the man - he neither deserves leniency, nor could he benefit from it, being long dead as he is.

Sheridan came to renown because he shot up through the ranks of the military quickly - which only tells us that he was willing to please the (usually immoral) men in power. How many other equally worthy commanders failed to be promoted as he was because they were not willing to be as ruthless? How many honest, moral men under his command were mistreated or sent to avoidable deaths, simply for his own benefit? How many other military men, when ordered to carry out injustices, resigned their posts in protest and thus fell into obscurity, while paving the way for Sheridan to rise?

Survivor bias is a hell of a thing. It's easy to think most or all soldiers of his time were like Sheridan - but it just as easily could be that all the "survivors" of his time were like him, because circumstances and the powers that be favored such men and elevated them over others, while lowering more moral individuals.

Tear down Gandhi's monuments. Remember, he was racist supporting apartheid. And Martin Luther King - seems that he was misogynist. And in hundred years, all monuments of most famous people will be destroyed, because how can moral person eat meat, or something.