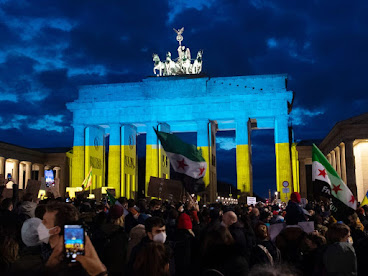 A new search engine that focuses on text-based sites and brings up a lot of older material hard to find via Google: https://search.marginalia.nu/

Auctions of leases for wind farm sites in the ocean off New York and New Jersey has raised $4 billion for the US government; power companies expect to make a lot of money from offshore wind. (NY Times; Interior Department announcement)

This week's master criminals thought they could shut down the US power grid by shooting at transmission lines with rifles, thereby triggering chaos and civil war.

In the US, men are lagging far behind women in attending and completing college. But that only applies to straight men: "About 52 percent of gay men age 25 or older in the United States have a bachelor’s degree. For context, about 36 percent of U.S. adults 25 or older have a bachelor’s; this ranks the United States ninth in the world in college completion. If America’s gay men, however, formed their own country, it would be the world’s most highly educated by far." (Washington Post)

Kenya's ambassador to the UN explains why his country, born from the "embers of empire," opposes Russia's attempt to rejoin people by force. (2:20 video)

Microsoft and other tech companies are throwing themselves into preventing Russian cyberattacks. (NY Times)

Thomas Edsall looks into the partisan affiliations of Asian Americans. On the whole they are strongly liberal, but many are worried about crime and education. Some political scientists are voicing the worry I expressed recently, that violent crime and progressive educational policies will drive many to the Republicans. (NY Times)

Warfare and state power: a new article, which I can't read because of paywalls, says that over the period 1789-2018 there is a strong correlation between the strength of states ("state capacity") and warfare. It seems clear to me that it was warfare that drove the rise of strong states, taxation, etc.

Wall Street Journal piece mulling over possible outcomes to the Ukraine war. I was able to access the article from this Tweet.

Twitter thread on Russian truck tires in Ukraine, an interesting look at what military logistics really requires. Short summary is that all the photos we have seen of Russian vehicles with blown tires implies they weren't doing the required upkeep.

In Arizona, dozens of voting "reform" bills have been introduced, including one that would require hand-marked paper ballots counted by hand. Most will surely fail, but the issue won't die. I find it interesting that many Republican-sponsored bills take aim at voting by mail, which has been associated mainly with older voters who lean conservative.

Institute for the Study of War summary of the Ukraine situation as of yesterday.

Art by Ukrainian painter Maria Prymachenko, very much rooted in tradition, some of which has been destroyed in the war.

This week's master criminals thought they could shut down the US power grid by shooting at transmission lines with rifles, thereby triggering chaos and civil war.

Cripes, they're just the poster children for the Dunning-Kruger effect, aren't they?

“The defendants believed their plan would cost the government millions of dollars and cause unrest for Americans in the region,” the Justice Department said in a news release. “They had conversations about how the possibility of the power being out for many months could cause war, even a race war, and induce the next Great Depression.”

"Hey Bob! I reckon if we shoot at that thar 'lectricul waiur, we could cut the power!"
"...cut the power to what?"
"Why, to the entire country, of course!"
"You think shootin' just the one will do it?"
"Good point - we should should a couple others while we're at it, just to be safe."
"...how long do you reckon the power will be cut?"
"Oh, couple months at least. Just look how high up them waiurs are. I ask you, how you gonna fix something like that? T'aint no ladder tall enough."
"Makes you wonder how they got it up there in the first place."
"Aliens, Bob. It's all part of the E-Looma-Nazi conspiracy to emasculate the White Man."
"I shoulda' knowed. Dang ol' Uncle Sam, always coverin' up his crimes against the Airyun Race."

In Arizona, dozens of voting "reform" bills have been introduced, including one that would require hand-marked paper ballots counted by hand. Most will surely fail, but the issue won't die. I find it interesting that many Republican-sponsored bills take aim at voting by mail, which has been associated mainly with older voters who lean conservative.

This is incorrect, according to a Pew Research piece on the last election.

"Within each age group, Biden voters are much more likely than Trump voters to say they voted by mail, with the size of this gap largely the same across groups."

Now, the detail that I think truly matters is that Democrats are likelier to vote early.

Why does early voting matter? Because the Republican playbook is to make it as difficult as possible for people to vote, in the hopes that they won't.

Imagine that mail-in voting wasn't possible. Suddenly you've got particularly large numbers of Democrats who have to go vote in person on election day - which means local voting locations need to process all those additional voters.

In rural areas where Republicans dominate, the additional numbers are likely to be relatively small - meaning those extra voters arriving on election day are unlikely to strain or overwhelm the voting system. People won't be forced to wait in long lines, will be able to get in and out relatively quickly and easily, and relatively few people who want to vote will be unable to.

But not so in cities where Democrats dominate. Not only are there more mail-in voters among Democrats to begin with, their local polling places already have to deal with much larger numbers of voters to begin with. Force all the mail-in voters in a dense population center to vote in-person, and that puts a much larger proportional strain on the local voting systems and potentially overwhelms them.

What's more, most rural areas aren't really contested elections to begin with. Republicans can afford to sacrifice a few of their own potential votes by restricting mail-in voting, because they are confident of winning in overwhelmingly "Red" rural areas regardless.

Where mail-in restrictions have the greatest effect is in securing the electoral college votes from closely contested "Purple" swing states. If you can make it harder for Democrats living in the cities of a swing state to vote, and thus suppress their turnout even just to the tune of a few thousand votes or so, that can potentially overturn the results of the election for that state, which can make a massive difference.

That's the entire reason why we're hearing about these proposals from Arizona. In the last presidential election, the Democrats got 1,672,143 votes while the Republicans got 1,661,686 - a difference of less than 11,000 votes, determining where a substantial 11 electoral votes ended up.

I guarantee you - if we outlawed the "winner take all" approach to distributing a state's electoral votes, and instead required that votes be split proportionally to the popular vote results, Republicans would quickly stop caring about mail-in voters.