The Beaker Folk and a Different Sort of Genetic History

Much of the history coming from paleogenetics has been rather grim, about how certain groups conquered others and almost completely replaced them. For example, the latest estimate is that 90 to 95% of the people of Britain were replaced after a Bronze Age invasion,  which may have been accompanied by bubonic plague.

But not everywhere. Data from Scandinavia suggests that many hunter-gatherers there survived and interbred with invading farmers, contributing up to a third of the genes of late Neolithic people. Since farmers generally live at higher populations densities, this implies a fairly equal contribution to future genes and a whole lot of intermixing. 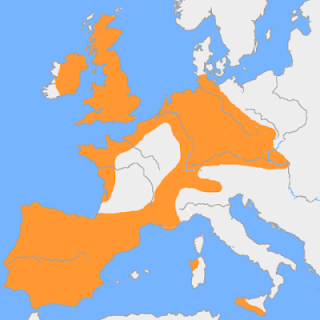 Distribution of the Bell Beaker Culture

And now there is some interesting data about the formation of the Bell Beaker people, who dominated parts of western Europe between 2700 and 2000 BC. Archaeologists long ago recognized that Beaker culture had two homelands, one in Portugal and one in the low countries around the mouth of the Rhine. Genetic studies showed that the two groups were not closely related. The southern group were mostly descended from neolithic farmers, while the northern group were like the Corded Ware people, who had a lot of genes from steppes invaders. Now new data shows that over time the Bell Beaker people interbred until most of them were a mix of Portuguese and Corded Ware types. Somehow these two groups, with different genetic histories and originating in different ecological zones, established a common culture with much interbreeding.

The current consensus is that many elements of Bell Beaker culture originated in Portugal. Somehow they spread that culture to northern peoples, who took it up with great enthusiasm, and then intermarried with southern folk, at least at the elite level.

So it wasn't all conquest and replacement.
Posted by John at 9:37 AM