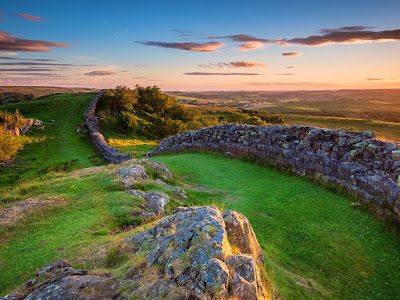 Hadrian's Wall, a magnificent monument of Roman power and wealth that happens to stretch  across a beautiful and fascinating stretch of Britain; a perfect spot for a bit of historical tourism. We begin our journey at Carlisle, a small city near the western end of the Wall. Carlisle was founded by the Romans as Luguvalium around 78 AD, two generations before the Wall was built in AD 122, and has a long and exciting history. The Roman fort here was the base of a cavalry force and no doubt saw much action over the centuries defending the empire against perfidious barbarians. 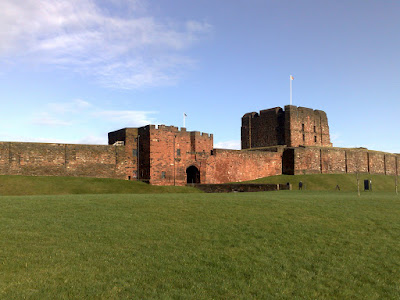 Then in the late 300s the Romans gave up and moved on. So far as archaeologists can tell, the Roman fort was still occupied throughout the dark times of Roman withdrawal and Anglo-Saxon invasion. In the 500s a kingdom called Rheged emerged in this part of Britain, and its king's primary seat may well have been at Carlisle. Then the Saxons took the spot, and then the Vikings took it from them, and then the Scots held it for a while. In 1092 William Rufus, the Conqueror's son, came here, drove out the Scots, and built a castle on top of the Roman fort that over the centuries evolved into the Carlisle Castle you can see today. 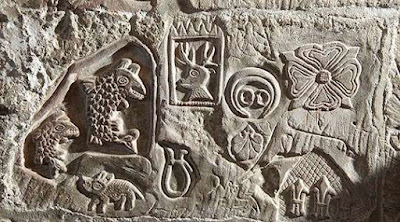 The castle was besieged at least six times, most spectacularly in 1315, when small English force led by Andrew Harclay defended it against Robert the Bruce's army, hurling Scottish scaling ladders down from the walls. The museum here covers this whole history, including an array of Roman artifacts. Among the things you can see are these carvings, made in the 1400s by either prisoners or guards. 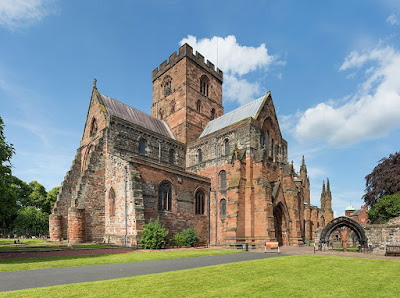 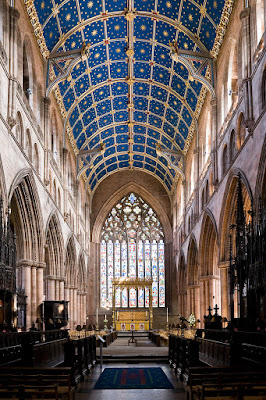 Carlisle also has a medieval cathedral and other interesting stuff. 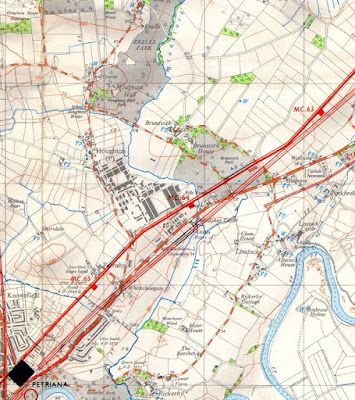 Heading east out of Carlyle we find the visible remains of the wall before we leave the suburbs. We're going to follow this amazing Ordnance Survey Map of the Wall, published in 1964. 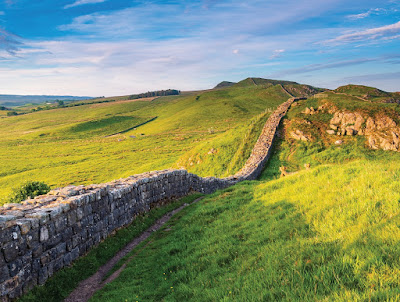 East of Carlisle the Wall runs along the crest of this ridge, providing some of the most spectacular views. 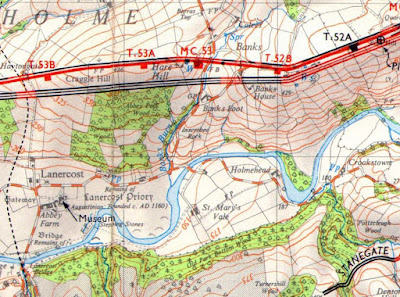 The Wall is only 84 miles (136 km) long, so to make a long day of this drive we're going to have to take some detours. Our first is to Lanercost Priory. (Notice the Stanegate in the lower right corner. This means "stone street" in the old northern dialect, and this was the Roman Road that paralleled the Wall, allowing for rapid movement of troops along it.) 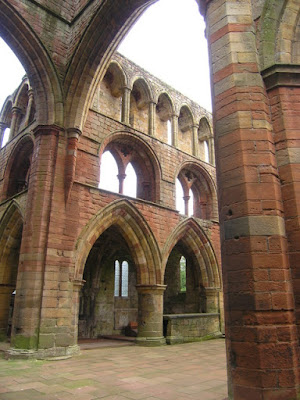 This spectacular ruin was built in the late 1200s and survived numerous Scottish incursions. 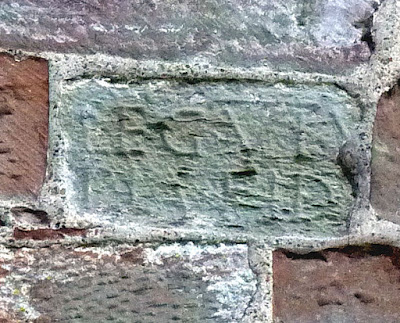 Built into the priory wall is a stone marking a dedication by the Legion VI Victrix, taken from some  fort along the Wall. 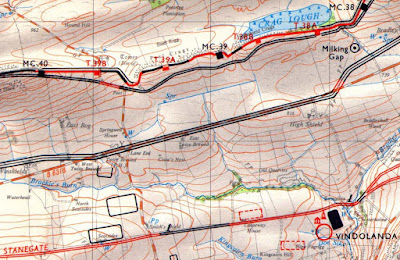 Continuing east we come to the first of the Wall's great archaeological sites, Vindolanda. As at Carlisle, the first fort here was built during the conquest, circa AD 85, and only later made part of the Wall's defensive system. 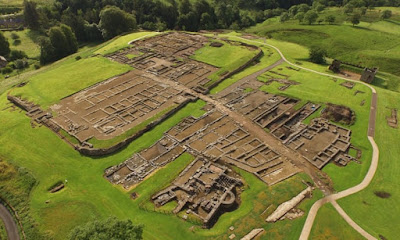 Aerial view showing the fort and the vicus, the town outside the walls. 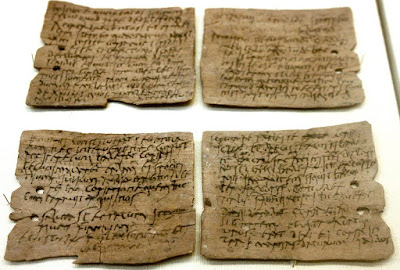 Vindolanda is best known because parts of the site sank over time into the mire, where deposits up to 25 feet (6 m) deep preserved an amazing array of Roman gear in leather, wood, cloth, and other perishable materials. The writing tablets, which preserve bits of arcana like invitations to birthday parties and job recommendations, are especially wonderful. 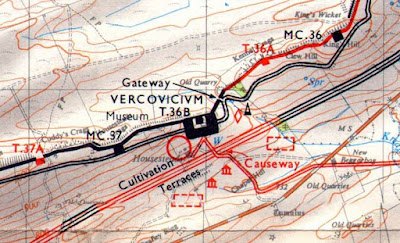 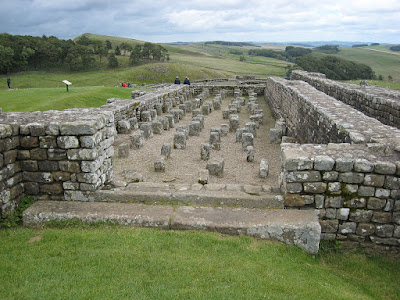 Just up the road from Vindolanda is Housesteads or Verovicium, another wonderful Roman fort, but if you are having Roman fort fatigue it's ok to move on. 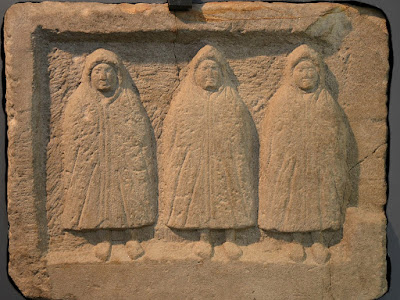 Housesteads did produce one of my favorite Roman artifacts, this carving of the mysterious "Three Hooded Ones." 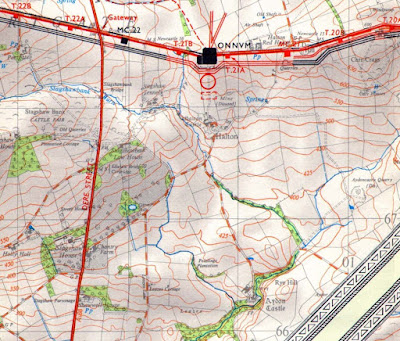 Continuing east we take another detour to visit Aydon Castle, a beautiful medieval manor house. (Notice the red line of Deere Street, one of the great Roman roads of Britain.) 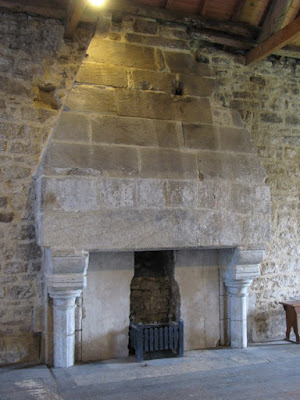 There was a timber hall here in the 12th century, belong to people with names like fitzGilbert and de Umfraville. In 1293 it was purchased by Hugh de Reymes; he and his son Robert built the castle. They were wealhty merchants from Suffolk in the process of transitioning into the landed gentry. But they soon fell on hard times, which is is why few improvements were made to the property until the 17th century. The castle was taken by the Scotts in 1315 and again in 1346, but was not severely damaged. 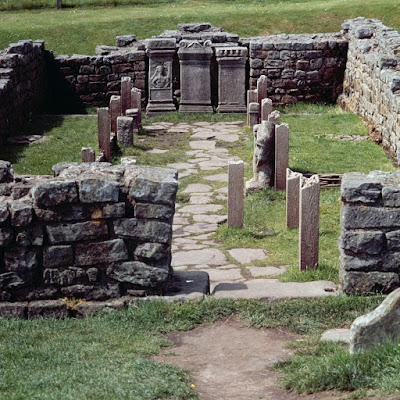 Moving east through rough country we come to a series of forts. At Brocoloitia there is a small temple of Mithras, 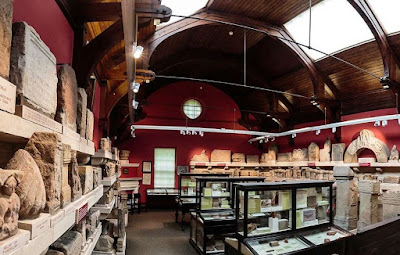 and at Chesters there is this museum. 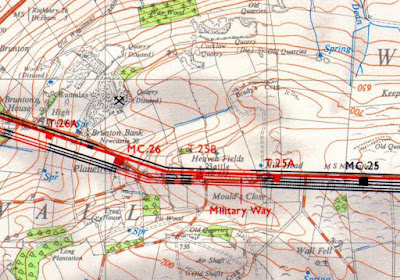 Continuing on our way we pass the spot where a modern stone cross marks the site of the Battle of Heavenfield, described in the Venerable Bede's history, where Oswald of Northumbria won a decisive victory over a Welsh force led by Cadwallon of Gwynedd, in AD 631. 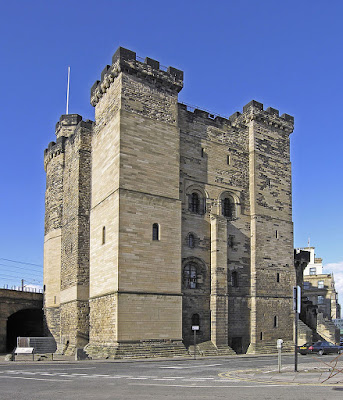 Sometime in the afternoon we enter the city of Newcastle upon Tyne, which grew up around the Wall's eastern end. In the center of town is the keep of the castle, which is actually one of the best preserved Norman castles in Britain. 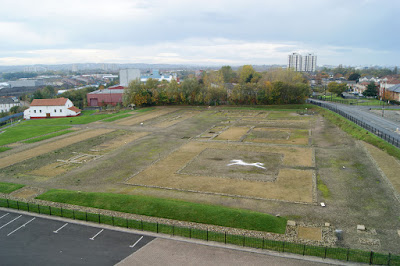 There is of course a museum in Newcastle and lots of Roman stuff, but we're going to push on. a few miles east. While the Wall originally ended in Newcastle, this was found to leave easy crossings over the Tyne undefended, so 5 years later the Wall was extended eastward to the new fortress of Segedunum. 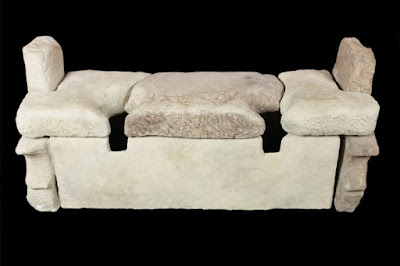 You can walk the walls of the fort here and tour one more museum, which holds among other things this famous Roman toilet seat. 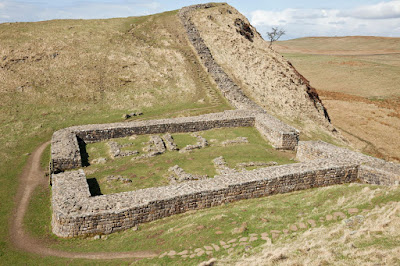 And then back into Newcastle for dinner and bed, the ringing of ancient swords, the songs of bards, and the chanting of monks filling our tired minds.
Posted by John at 12:06 PM