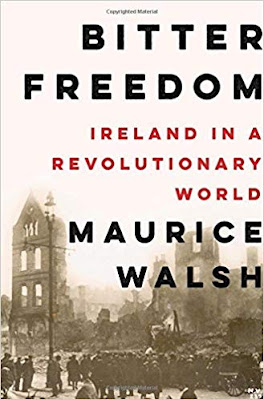 Maurice Walsh's 2015 book is the best I have read about the Irish revolution of 1919-1924. It purports to be different from others on the same topic by placing Ireland in the world context of the time: after all, this was the era of the Bolshevik Revolution, the Versailles Treaty, the rebirth of Poland and Lithuania, and so on. Walsh does this to some extent, and at times the global perspective adds insight, but mostly this is just a very well written narrative of the revolutionary years.  What I especially admired was how Walsh makes everything seem uncertain and contingent. In Walsh's view neither the guerrilla war of 1919-1921, the civil war that followed, nor the partition of the island was inevitable, and he shows in detail how each step unfolded.

Walsh also has a fabulous eye for anecdotes that capture the mood of the nation. Describing the decline of Ireland's Protestant gentry, many of whom were financially ruined but still owned famous houses, Walsh finds an account of a party in a Norman castle where


All of us were in full evening dress. After dinner we ascended the great staircase leading to the drawing room. Unfortunately it started to rain, and like many things in Ireland, the roof was leaky, so we ascended, each gentleman holding an umbrella over his lady.

When the first curfew was imposed on Dublin in January 1920, teenagers delighted in racing home by midnight or sneaking back after, a journey that, according to one diarist, provided "endless opportunities to hide in gardens, taking cover lying on the grass locked in each other's arms and stifling one's giggles with a kiss." Walsh has dozens of these little stories, and they made reading Bitter Freedom a real pleasure despite the often grim subject matter.

The crisis began with the election of December, 1918, when the Sinn Fein party won 73 of Ireland's 105 seats in the British Parliament. Sinn Fein had promised that rather than journey to Westminster they would stay in Ireland and set up their own, independent parliament. They did so. As the British government argued over how to respond, Sinn Fein set about organizing a shadow government in Ireland, with its own court system and taxation. They also began assembling an army, bringing together volunteers for drill and weapons practice right out in the open; these became known as the Irish Republican Army. Eventually the British did begin to crack down on the Sinn Fein regime, declaring its activities illegal and arresting some of its leaders. The debates over Irish affairs in Parliament and the cabinet were as much about the rest of the world as they were about Ireland: some saw Sinn Fein as the local arm of international communism, while others were worried that if independence were allowed for Ireland this would only encourage nationalists in India, Egypt, and other imperial possessions.

Meanwhile certain people in Ireland began plotting their own response to the arrests of Sinn Fein leaders. A small radical IRA faction, without seeking approval from the leadership, decided to assassinate a policeman. The response to this attack was almost all negative; the Irish church was especially harsh, and orders went down from the bishops that every priest denounce violence from the pulpit. So the radicals rethought their actions and came up with a better plan: assassinate a notoriously bad policeman. They chose a man who was both an overweening ass despised by his neighbors and heavily involved in harassing the Sinn Fein government. This time the response was much more muted, with even many priests saying that Sinn Fein had to defend itself against such characters. The circle of violence spiraled out from there: Sinn Fein killed some policemen, mostly detectives on the special squads assigned to putting down Sinn Fein and the IRA. The government fought back, arresting more Sinn Fein leaders, breaking up their arbitration courts, and assigning more police to the problem. Sinn Fein killed more policemen. The government came to fear that the Irish police were cowed and unable to deal with the problem, so they turned to other weapons. They sent dozens of army intelligence officers to Ireland to help, and some regular troops to guard key points. They also set up a force called the Auxiliaries, now known to us by their nickname, the Black and Tans.

The Auxiliaries were recruited from soldiers who had been demobilized in 1918 but had not found steady work. They were especially recruited from out of work officers. And these out of work officers were largely men who had not come from the upper or upper middle classes that had traditionally supplied Britain's leadership. Under the stress of the Great War there simply were not enough such men to fill all the needed posts, so the army made thousands of men from the lower middle class into lieutenants, captains, and majors. After the war these men faced a torrent of class prejudice; "they think a few months as an officer made them into gentlemen, har har" was the refrain. These men, pissed at the world, were recruited by the hundreds, sent to Ireland where they were given a two-week crash course in policing, and turned loose to fight the IRA. They did not even have proper uniforms, so they ended up with mix and match bits of black police garb and army khaki, which is how they got their nickname.

The result was, predictably, another escalation of violence. IRA men had been operating openly in Dublin and other cities, counting on the protection of the civilians around them, but the Black and Tans didn't care; they would open fire on crowded streets or even in crowded train cars, civilian casualties be damned. They cultivated a reputation for freewheeling violence. In one of Walsh' s anecdotes, the Black and Tans have boarded a train to arrest some IRA men they think are on board. As they charge through the train, pointing their guns in random faces, a Protestant gentleman says to one, "Young man, stop waving that pistol around, it might go off." He responds, "It's alright old man, I can reload pretty quick."

A war ensued between the Auxiliaries, backed by the army when need be, and special IRA units known as "flying columns" who kept moving around the countryside to avoid capture. When the IRA managed to ambush a Black and Tan force and kill some of its members, they enacted savage retaliations, including once burning most of downtown Cork. In England the government was roundly attacked for these abuses and adopted a two-faced response: we never ordered retaliation but we understand why men under such stress do it.

Militarily, the British were winning; the IRA simply could not face down the might of the empire. Politically, the Westminster government was losing. In the south of Ireland they had only minimal support left, and in Britain the press gave full attention to every government atrocity. They were also losing support in the arena that at that moment meant the most to them, within the leadership of the empire. In 1920 the imperial leadership was bent on recasting the British Empire as a worldwide association of nations within which all white men (South Africans, Australians, New Zealanders, Canadians, and God willing Americans) would unite to make the world safe for civilization. The ongoing white-on-white violence in Ireland, so well covered by the international press, was undermining the whole program. South African General Jan Smuts told the British cabinet that every month the Irish situation dragged on raised the risk of native revolts in Africa and Asia. So both sides had an incentive to seek peace on whatever terms were available.

It was at this moment that Ireland was partitioned, one of those acts taken with little thought in the midst of a crisis that reverberates for decades. Knowing that they had lost control of the south, the government decided to create a separate parliament for six counties in the northeast that had a Protestant majority. This was done without much fanfare, everyone understanding that it was an emergency measure that might soon be undone, once peace was established.

And so it goes.

At the British government's invitation, three Irish peace commissioners, led by IRA commander Michael Collins, went to Westminster to talk peace. None of the Irishmen had any diplomatic experience when they sat down to face the leaders of the British empire, nor did they have any clear instructions from home; indeed, the Irish Parliament had not even been able to meet for six months. It turned out that the British were quite willing to concede home rule to Ireland, but with two major conditions, one constitutional and one practical. The practical consideration was that Ireland never allow itself to be used as a base by Britain's enemies, and never develop a military capable of threatening England; this was somewhat galling but everyone understood its practical importance, and it was not ultimately controversial in Ireland. The second, constitutional demand was that Ireland remain a British dominion with the King as theoretical sovereign, every legislator taking an oath of allegiance to the crown.

This demand divided Ireland, leading ultimately to civil war. To many Irish rebels, throwing off allegiance to the crown was the whole point; for more than a century their demand had been for a Republic, free from monarchs. Others thought that was airy nonsense; if Ireland could achieve its effective independence, and peace, what was the use of quibbling about God Save the King? Michael Collins and his colleagues decided to accept the British terms, and Ireland remained part of the Commonwealth down to 1949.

But when Collins returned home and the terms of the treaty were announced, Ireland exploded. So far as can be judged, most of the people supported the peace terms, and a majority of the parliament voted for them, but most of the IRA did not. It took a year of fighting for the Irish government to put down the anti-treaty rebels, using methods as brutal as any used by the British. Toward the end of the fighting Michael Collins, the country's most effective and widely admired leader, was killed in an ambush. What remained of the economy after years of rebellion was wrecked, and the Protestant leaders in the north were confirmed in their inclination to have nothing to do with the rest of the island. To get the firm support of the Catholic church the Irish government made the deal with them that has lately so haunted the country, placing education, care of orphans, oversight of women pregnant out of wedlock, and many other matters under complete church control.

The great hopes of the 1918 election were mostly dashed, and the stage was set for decades of economic stagnation, mass emigration (half the children born in Ireland in the 1950s left the country), petty politics, and the moral tyranny of an empowered church. The island was divided and violence sputtered on in the north. Independence was achieved, yes, and centuries of abuse heaped on Catholic Irish was halted. But the cost was very, very high.
Posted by John at 1:52 PM