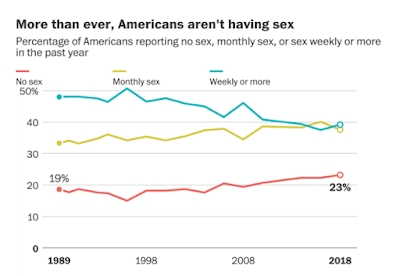 According to the General Social Survey, which is a pretty good source as these things go, Americans are having less sex. This is partly because the population is aging, and 80-year-olds are a generally chaste bunch. 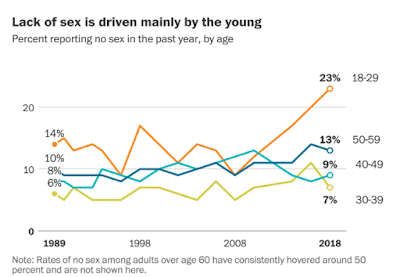 But the biggest driver of the trend is actually among the young; the number of 18-29 year-olds reporting no sex in the past year has increased dramatically, to 23 percent. Weirdly most of the increase is among young men; 28% of young men report no sex, vs. 18% of women.

The underlying cause is of course delayed marriage; fewer young people are having sex because fewer of them are married or otherwise partnered.

Does this maybe explain the country's sour mood? Are the forces that drive young people to delay marriage -- careerism, graduate school, extended adolescence -- making us cranky?
Posted by John at 12:30 PM

Well, if 28% of young males report no sex vs 18% of females, then there are three explanations: (1) more lesbian sex (2) younger females are having sex with older guys (3) there is a group of males who has disproportionally more sex than other males.

Which explanation is the most plausible?

I say a combination of (3) and lying or error.

Why weirdly? Isn't that the pattern you'd expect to see when marriage no longer has anything to do with young people's sexuality? Big alpha chimp gets all the ladies, lesser males get nothing.