The Holy Roman Empire is Back 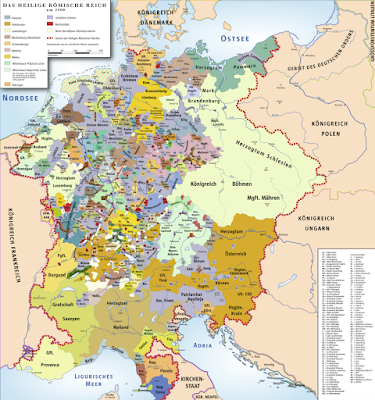 The Holy Roman Empire around 1400

From the eighteenth century to World War II German historians were mostly scornful of the Holy Roman Empire. It was seen as a failure, a ramshackle arrangement whose baroque constitution and lack of central authority allowed foreign powers to meddle in German affairs, preventing Germany from achieving its destiny as a unified state.

After the Nazis, of course, things looked different to many Germans. The non-sovereign Empire, with its lack of coercive power and emphasis on consensus decision-making, looked to some like an alternative to strong national states and the dangers that went with them. Coupled with the rise of Early Modern Europe as a recognized field of study, this led to a slow but steady increase in scholarship about the Empire and its institutions. More recently it has been the obvious parallel to the European Union that generates interest; how can a non-sovereign association of states that must achieve consensus on all decisions work? 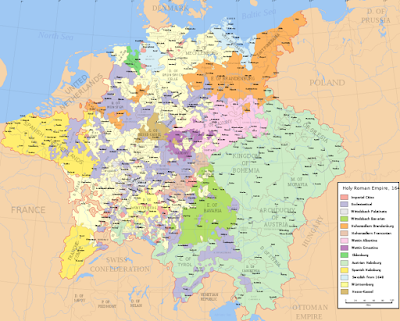 The Holy Roman Empire after the Peace of Westphalia in 1648

I've just read one of the products of this new scholarship, The Holy Roman Empire: a Short History by Barbara Stollberg-Rilinger (2018, German edition 2013). This is a dry little book not recommended for anyone but professional historians, but it is packed with information about things like the legal system and how the Imperial Estates (Parliament-like meetings of the member communities) worked. It also shows how the Empire's institutions evolved over the 1495-1806 period.

Alas for fans of non-sovereign, non-coercive polities, the Holy Roman Empire did not work not very well. The Empire certainly did achieve certain notable things, especially preserving the peace among its member states most of the time. The empire had hundred of theoretically independent parts, including dozens of cities and very small lordships, and across the early modern period it mostly kept them from fighting each other. It also raised a large amount of money for wars against the Turkish invaders, especially in the long war that culminated in the second siege of Vienna in 1683, and constructed a common legal code (again, without sovereignty or coercive power) that is still the basis of German law.

But the Empire ultimately failed in one of its main goals, keeping its stronger members from oppressing their weaker neighbors, and its inability to resolve the crisis created by the Reformation led to a century of religious war. It also failed to protect its people from foreign invaders and intriguers. The lion's share of the battles in Europe's early modern wars were fought on the Empire's soil, including battles between the French and the Spanish, between the French and the English, and later between the French and the Russians, and this was partly because of its intrinsic weakness. (Breitenfeld, Breisach, Blenheim, Austerlitz, etc.) The Empire was devastated during the Thirty Years War, when armies from France, Sweden, Denmark, Spain, and England marched and fought on its soil. It lost large chunks of territory to better-organized states. When Napoleon finally abolished it, hardly anyone mourned.

Let me pass along this paragraph from Stollberg-Rilinger's conclusion, under the heading What was the Holy Roman Empire?


The Holy Roman Empire was a political association based on tradition and consensus. Its structure relied partly on old customary rules and procedures and partly on mutual agreements between its members. Top-down statutes had little or no place in such an association, because the Empire lacked a supreme legal authority that could enforce its decisions on all the other members. Legal and political rights in the Empire were either practices surrounded by an aura of antiquity and espoused, uncontested, for a long time on the ground, or consensual agreements between the Imperial members. It was especially the written fundamental laws of the empire that possessed such a consensual character, although even they were only islands in the midst of the vast ocean of customary law. The Imperial legal order did not have the character of a systematic and well-organized written constitution. Rather, it was an aggregation of often conflicting laws, rights, privileges, and legal procedures that grew slowly over many centuries.