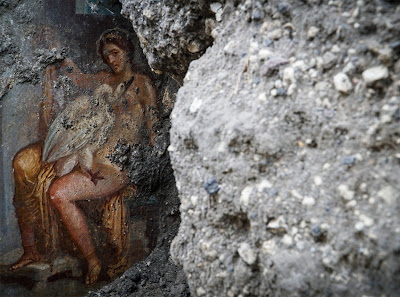 For the most part Italian archaeologists have stopped uncovering more of Pompeii, since they can't properly manage what they have already unearthed. The discoveries I have reported on here have mostly been in areas of the city uncovered long ago, made by digging a little deeper to find things already buried before the eruption. 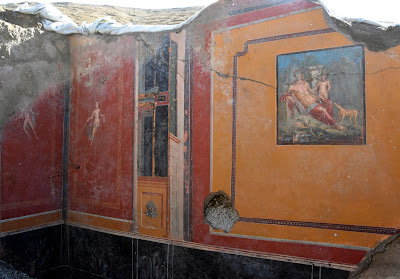 But over the past decade the site's managers have grown concerned about one part of the city, where heavy rains were eroding soil from unexcavated houses and threatening their contents. So they obtained a large grant from the European Union to undertake new excavations. 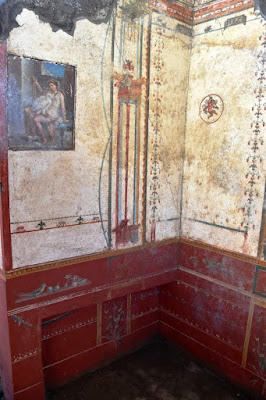 So far the most spectacular finds have been in one house, two rooms with frescoes they call the Leda Bedroom and the Narcissus Alcove. Amazing that the paint should be so bright after nearly 2000 years. 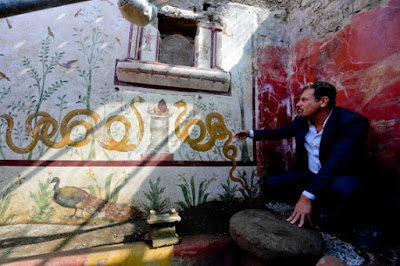 This lararium was found in a house not far away.

Another grimly fascinating discovery was made in the Stable of Civita Giuliana, where archaeologists have uncovered three horses who were killed and buried in elaborate military harness. I suppose they were being readied for an escape that came too late.
Posted by John at 6:19 PM

I especially liked the tall bronze lamp stand found still laying up against the wall, on the verge of toppling over for almost 2000 years. Enjoyed watching their progress last year.