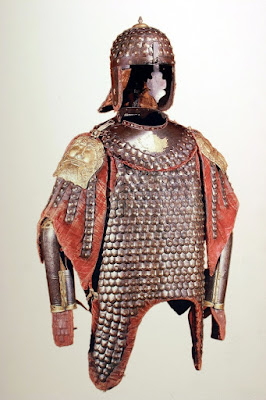 Worn when he led his Polish army to help lift the Turkish siege of Vienna in 1683.

Actually the army Sobieski led to Vienna was only half Polish, the rest of his 60,000 men drawn from all around the German-speaking lands. Sobieski was placed in command partly because as a king he was the highest ranking leader and partly because he had already fought in a staggering number of battles – against Prussians, Swedes, Russians, Tatars, other Poles, and more – none of which I had ever heard of until I read his wikipedia biography. 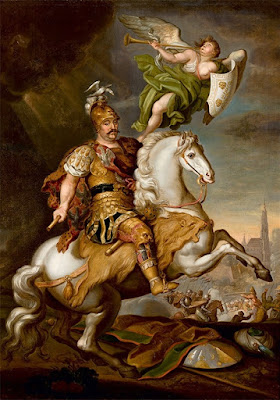 Vienna was under siege by a Turkish army said to number 140,000. Probably not an accurate number, given that half of a typical Turkish army was unpaid irregulars who came along to plunder, but anyway it was a big army. Sobieski attacked them within hours of his first men arriving on the scene, the sort of action that makes the commander a bold hero when it works and an incautious fool when it fails. That time it worked; the Turks fought for a while but were never really able to get into a fighting formation, and when Sobieski personally led a great cavalry charge at their flank they fled in confusion. 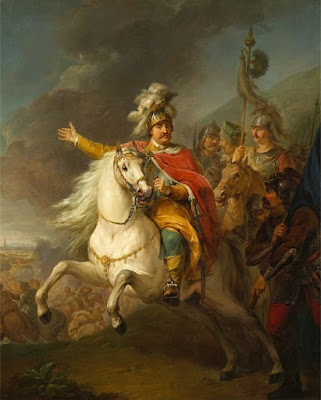 "Leading a charge" it's not really what one thinks; it was custom for a commander to accompany his units during attack and then go back. He hasn't actually led them right to the clash.

Well, sure, kings who went into battle were always surrounded by large bodyguards. But there was a difference between advancing with your men and staying behind the lines, and our sources for medieval and early modern battles recognize this.