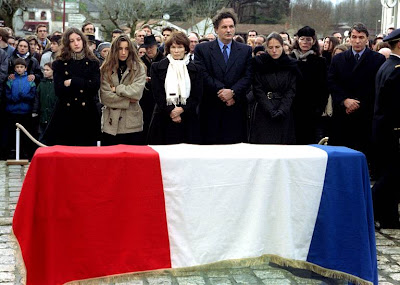 Famous photograph of the funeral of French President Francois Mitterrand in 1996. His wife Danielle is in the center in the white scarf, between one of her sons and her two granddaughters. Second from the right is Mitterrand's longtime mistress, Anne Pingeot, and next to her is their illegitimate daughter. On the far right is the other legitimate son.

If Romney's people can't get any traction by calling Gingrich a sleazeball, perhaps they could score points by pointing out that the domestic arrangement he wanted  is quintessentially French.
Posted by John at 6:26 PM