Self domestication is an idea that I think may explain a lot of human evolution over the past 50,000 years. The basic concept comes from the Belyaev fox experiment, carried out by Russian geneticist Dmitry Belyaev. Belyaev showed that he could produce the whole suite of traits that mark domesticated animals, from short faces to spotted coats, by breeding silver foxes for one trait: the willingness to be touched by people. What if, as we came to live in larger and more settled communities, we effectively selected ourselves for our willingness to live at close quarters with other people? That might explain a big part of why we look different than we did 30,000 years ago.

Now that same idea has been proposed as a way to explain the differences between chimps and bonobos. Ed Yong: 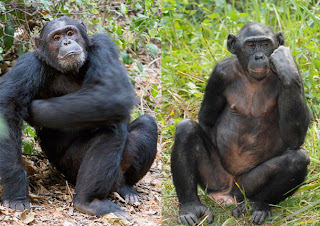 The two apes above might look very similar to the untrained eye, but they belong to two very different species. The one on the right is a bonobo; the one on the left is a chimpanzee. They are very closely related but the bonobo is slimmer, with a smaller skull, shorter canines and tufts of lighter fur. There are psychological differences too. Bonobos spend more time having sex, and playing with one another. They’re less sensitive to stress. They’re more sensitive to social cues. And they are far less aggressive than chimps.

Many years back, a young researcher called Brian Hare was listening to the Harvard anthropologist Richard Wrangham expound on this bizarre constellation of traits. “He was talking about how bonobos are an evolutionary puzzle,” recalls Hare. “They have all these weird traits relative to chimps and we have no idea how to explain them.”

But Hare had an idea. “I said, ‘Oh that’s like the silver foxes!’

Fascinating.
Posted by John at 5:28 PM