Warfare in the American Southwest 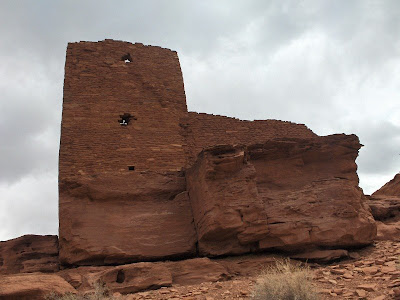 This little essay, essentially a summary of a book, provides a good primer on how archaeologists try to reconstruct historical narratives from physical evidence. The book is Stress and Warfare Among the Kayenta Anasazi of the Thirteenth Century (1993) by Jonathan Haas. The Kayenta Anasazi lived in the Long House Valley of Arizona from around 900 AD onward. In the early days their settlement pattern was one of many tiny villages distributed evenly across the valley. Pollen and tree rings tell us that this was a time of benign weather, with adequate rainfall for agriculture. After 1150 the settlement pattern changed dramatically. For the 1150 to 1300 period there are only five settlements in the valley, large villages with a population of hundreds. These are all sited in defensible positions, one on top of a cliff that must be climbed using hand-holds cut in the rock.

Haas emphasized two factors leading to the change. One was the need to cooperate in the greater engineering works needed to keep farming going in the drier climate:

In the face of a generation-long drought and steadily declining food and water sources, the Kayenta Anasazi in the Long House area banded together. They moved into tight clusters and began working together to survive. They built common rooms in the central settlement of each village for grinding shared stores of corn into flour. They also constructed reservoirs at each village to maximize their shared access to the dwindling water supply. These changes are a testament to remarkable cooperation among the Long House residents during a difficult time.

The other is an increase in warfare:

Other villages in the valley were also built in defensible locations. Some were even partially surrounded by walls. Villages were also positioned on high ground so that each village had a view of other villages. In one case, a large V-shaped notch was dug into a hill to create a direct line of sight between two villages. A view of other villages may have been important for signaling and quick visual communication. Some villages also commanded a view of geographical entryways into the valley, presumably so that approaching enemy raiding parties could be spotted early. Haas assumes that the villages weren’t built in inconvenient places by accident. Instead, they were purposefully placed in strategic locations by a group of people who were under pressure from frequent warfare.

Much of the thinking these days about the impact of climate change on human societies follows this model. What is important is not so much what the weather did, but how people responded to it. Declining rainfall did not destroy the society of the Kayenta Anasazi; we are highly adaptable animals, capable of living almost everywhere. Instead it led people to change how they did things, banding together into larger settlements. Apparently these changes brought them into conflict with their neighbors, but, again, that conflict did not lead to their demise, it simply led them to take greater measures for their defense.
Posted by John at 7:17 AM