The Threefold Death of the Hermaphrodite 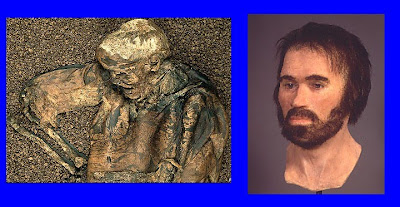 This is Lindow Man, a body of the first century AD found in a peat bog in England. Lindow Man is probably the most famous of all the bog bodies because of how he died: hit on the head with an ax, garroted, and stabbed in the neck in rapid succession. The "threefold death" has a long literary pedigree in the Celtic lands, and a whole list of Celtic heroes and villains managed to die in three ways at once. The general view is that Lindow Man must have been sacrificed to the gods, and that the literary trope of the threefold death is some kind of memory or echo of ancient sacrificial practice.

I am planning to mention Lindow Man in class on Monday, so this afternoon I was looking for pictures to use in my slide show. One of the pages Google took me to had this title:

The Body from the Bog Comes Out
2,000 year old bog mummy in England was a homosexual Druid who most likely offered himself as a human sacrifice against invading Romans to keep them (successfully) out of Ireland

Ok, I thought, you've got my attention. Reading on I discovered that the creator of this page, a certain Connell O'Donovan who seems to be an expert on gay Mormons, gives a lot of the usual speculations about Lindow man: an unjustified leap from the radiocarbon dating of the body to an exact calendar date of AD 60, a questionable assertion that the threefold death thing is an Irish tradition (it is also attested in Welsh documents, including the legends about Merlin), plausible but far from certain speculations that make Lindow Man a druid, Roman accusations about rampant homosexuality among the Celts, and so on. In short, an interesting page but nothing remarkable. Then, this:

In a very curious and obscure Latin text from the early 1100s, Christo-pagan scholar Hildebert of Lavardin (France) wrote a "song" called De Hermaphrodito (or De ermafrodito, On the Hermaphrodite), which details the prophetic, tripartite death of an arms-bearing hermaphrodite.

Well, I thought, that would certainly be worth reading. Scrolling down, I found that our author gives the whole poem, in both Latin and English:

Now as my pregnant mother carried me in the belly
She is held to have consulted the gods on how I would appear.
Phoebus affirmed: it is a boy; Mars, it is a woman, and Juno, it is neither;
When I was born, I was a hermaphrodite.
When she [my mother] sought my death, the goddess affirmed: He will fall upon arms;
Mars: He will fall from a gallows-tree; Phoebus: He will fall in water. With the casting of a lot, each one came to be.
A tree over-shadows waters, I climb up, sword slips,
Falling upon that which I took up, and I myself begin to sink upon it.
Foot caught by branches, head falls in a river; and behold:
Man, woman, neither; floods, spears, a gallows-tree.