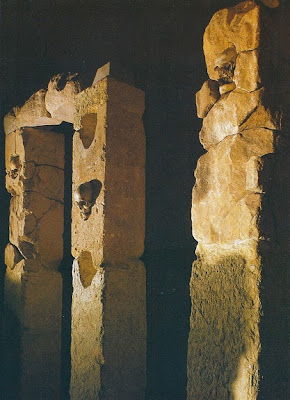 The ancient Celts had a thing about human heads. According to Diodorus Siculus, Celtic warriors made trophies of their enemies' heads:

When their enemies fall they cut off their heads and fasten them about the necks of their horses; and turning over to their attendants the arms of their opponents, all covered with blood, they carry them off as booty, singing a paean over them and striking up a song of victory, and these first-fruits of battle they fasten by nails upon their houses, just as men do, in certain kinds of hunting, with the heads of wild beasts they have mastered. The heads of their most distinguished enemies they embalm in cedar-oil and carefully preserve in a chest, and these they exhibit to strangers, gravely maintaining that in exchange for this head some one of their ancestors, or their father, or the man himself, refused the offer of a great sum of money. And some men among them, we are told, boast that they have not accepted an equal weight of gold for the head they show, displaying a barbarous sort of greatness of soul; for not to sell that which constitutes a witness and proof of one's valour is a noble thing, but to continue to fight against one of our own race, after he is dead, is to descend to the level of beasts.

This fascination with human heads appears in some of the Welsh and Irish legends, especially the Welsh story of Bran the Blessed, from the Mabinogion. Bran led an invasion of Ireland, from which only seven men returned alive. Bran was wounded in the heel by a poisoned dart, and as he lay dying

Bran commanded them that they should cut off his head. "And take you my head," said he, "and bear it even unto the White Mount, in London, and bury it there, with the face towards France. And a long time will you be upon the road. In Harlech you will be feasting seven years, the birds of Rhiannon singing unto you the while. And all that time the head will be to you as pleasant company as it ever was when on my body. And at Gwales in Penvro you will be fourscore years, and you may remain there, and the head with you uncorrupted, until you open the door that looks towards Aber Henvelen, and towards Cornwall. And after you have opened that door, there you may no longer tarry, set forth then to London to bury the head, and go straight forward."

So they cut off his head, and these seven went forward therewith. . . .

Then they went on to Harlech, and there stopped to rest, and they provided meat and liquor, and sat down to eat and to drink. And there came three birds, and began singing unto them a certain song, and all the songs they had ever heard were unpleasant compared thereto and the birds seemed to them to be at a great distance from them over the sea, yet they appeared as distinct as if they were close by, and at this feast they continued seven years.

And at the close of the seventh year they went forth to Gwales in Penvro, and they regaled themselves and were joyful. And of all they had seen of food laid before them, and of all they had heard of, they remembered nothing; neither of that, nor of any

sorrow whatsoever. And there they remained fourscore years, unconscious of having ever spent a time more joyous and mirthful. And they were not more weary than when first they came, neither did they, any of them, know the time they had been there. And it was not more irksome to them having the head with them, than if Bran had been with them himself. And because of these fourscore years, it was called the entertaining of the noble head.

Severed heads appear fairly often in Celtic art. The one at right is part of a statue found at Entremont in France. Another fragmentary statue from the same site seems to depict a god or king enthroned atop a pile of heads. Most famous is the entrance to the sanctuary at Roquepertuse, at the top, with its niches for human skulls.

I am not sure what any of this means, other than pointing to a sense of the uncanny as the basis of much religious feeling.
Posted by John at 4:04 PM