Celts to Vikings 5: the Celts 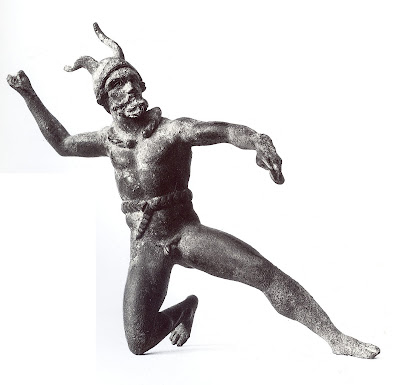 On Wednesday we started our two-week unit on the ancient Celts. We began with some of the Roman sources, especially Julius Caesar's little ethnography of the Gauls and Tacitus' account of the revolt of Queen Boudicca in Britain. Caesar tells us that the Gauls -- the Celts of modern France -- were a strongly class-bound society: "The ordinary people are considered almost as slaves: they dare do nothing on their own account and are not called to counsels." The aristocratic men were of two kinds, the warriors and the druids. The druids, he says,

are involved in matters of religion. They manage public and private sacrifices and interpret religious customs and ceremonies. Young men flock to them in large numbers to gain instruction, and they hold the druids in great esteem. For they decide almost all disputes, both public and private.

The druids enforce their edicts through their power to ban people from sacrifices, which would damage the standing of the victim both with the gods and in the community.

Druids do not fight, nor do they pay taxes . . . they are exempt from military service and from all obligations. Such great rewards encourage many to begin training, either of their own accord or sent by parents and relatives. There they are told to memorize a large number of lines of poetry, and some spend twenty years in training. Nor do they think it proper to commit this teaching to writing. . . The principal doctrine they attempt to impart is that souls do not die but after death cross from one person to another.

Caesar devotes two paragraphs to Gaulish religion, especially their habit of human sacrifice. In general he emphasizes the otherness of the Gauls, the things about them that were most different from Rome. I think, though, that the story of Caesar's conquest of the Gauls tells us something else about them. Caesar was a competent military commander but hardly a brilliant one. His real genius lay in politics, and he was able to conquer the Gauls because his political maneuvering kept them from ever uniting against him. It seems to me that if the political skills Caesar developed in Italy worked so well among the Gauls, the Gauls cannot have been that different from the Romans. And indeed we see from archaeology that the Gauls who lived closest to Rome had adopted much of Mediterranean civilization, especially the habit of living in towns. 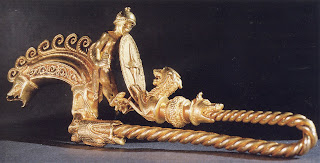 However much the more civilized Gauls had become like the Romans, they still retained the Celtic style. Even in one class it is possible to get across how different that style was from the habits of the Romans. Among the Celts there was little reverence for order or moderation, and much more for the bold gesture and the flamboyant act. They had a habit of fighting naked, for example, preferring to show off their courage rather than protect themselves with armor. They loved gaudy jewelry, spectacular ceremonies, grand boasting, outrageous tall tales, and acts of doomed courage. The liked stories about lovers who defied the world and died for it, about heroes who fought alone against armies, about men who kept their oaths even though it meant certain destruction. There is an impractical air about much of what they did, as if, for them, the style with which one fought counted for more than victory.
Posted by John at 1:08 PM