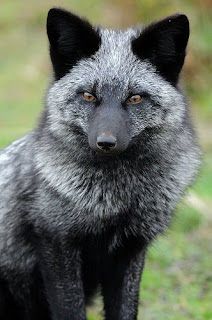 I learned long ago about the experiment with fox domestication carried out by Russian biologist Dmitry Belyaev starting in the 1950s, but I just learned from national Geographic that it is still going on. Belyaev captured wild silver foxes and bred them for one characteristic, their willingness to be approached and touched by humans. After ten generations, his foxes were quite tame, and the whole suite of features that define domesticated mammals had appeared in them: floppy ears, shorter faces, spotted coats. Now the Russian researchers, led by Belyaev's former students, are teaming with western molecular biologists to work out the genetic basis for these changes. It's quite fascinating science, and it raises questions about what happened to people as we got used to living in larger, more crowded communities.

Incidentally, Belyaev started this work after being exiled to Siberia for opposing Trofim Lysenko's dominance of Soviet biology. Looking around his new home he asked himself, "What is there here that I could do some interesting work on?" and the answer was lots of fur farms with captive wild animals. Hence, foxes. Now that's making lemonade when life sends you lemons.
Posted by John at 4:22 PM