Celts to Vikings 6a: the Gundestrup Cauldron 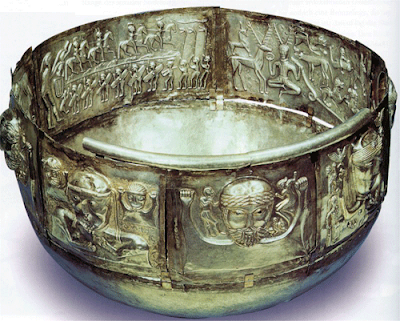 The Gundestrup Cauldron is a silver bowl measuring 69 centimeters across, or about 28 inches. It was found disassembled in a Danish peat bog in 1891. It dates to the first century BC, and it is covered with striking images of Celtic gods and heroes. 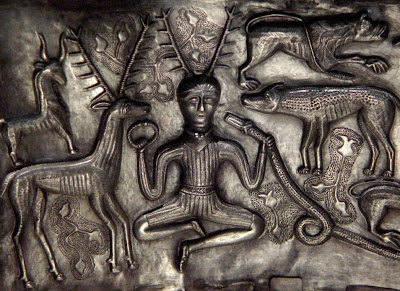 This is probably the most famous image, thought by most to represent Cernunnos, the Horned One, a Celtic deity attested in many inscriptions from France and Austria. (But not in Britain, and not mentioned in the Irish or Welsh legends.) 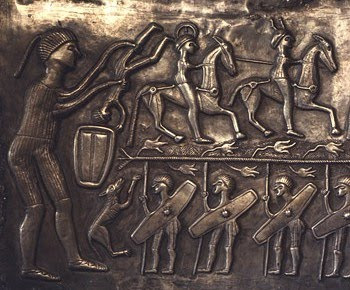 This fellow is often said to be dunking people into a cauldron, possibly corpses to be revivified as in the Welsh legends, or possibly sacrificial victims. But that might not be a cauldron at all; other suggestions include the mouth of a sacred shaft (the Celts threw some victims of human sacrifice down deep shafts or wells) and a stone on which victims were slaughtered.

The wheel appears in many pieces of Celtic religious art, possibly representing the sun, or thunder, or something else altogether. This being, whoever he is, comes with a fascinating menagerie of griffins, snakes, and what look like hyenas. 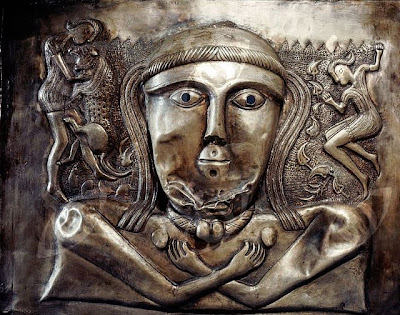 The outside plates all represent the faces of figures that most people take to be deities. This appears to be a goddess, and the scenes of her fighting a bull and dancing with the plants may be aspects of her myth. The captions of these plates in books and online often identify the faces as gods known from Gaulish inscriptions or Irish stories, but except for Cernunnos I put no faith in these attributions. Based on its style, the cauldron was probably made in southeastern Europe. We know next to nothing about the Celts who moved southeast from their Swiss heartland, except that some of them attacked Delphi in Greece and ended up in the part of Turkey that came to be called Galatia. Since the names of the Irish gods seem to have been very different from the names of the gods in Gaul, why would the names of the gods of Celts in Romania be the same as either? I think the phantasmagoric quality of the images is more important than any attempt to name and systematize them. Like the crazy imagery of the Irish stories, these pictures seem to emphasize how wild the world of the gods is, how unpredictable, how hard for us to understand or describe.
Posted by John at 8:28 PM

Many experts now believe the cauldron has a Thracian origin. The style of artwork is more Thracian than Celtic, and Thracians were known for their silver work. The silver used in the cauldron came from melted down coins. We know the weight of silver coins that date from Thrace in the period that the cauldron was made, and the total estimated weight of the cauldron based on existing pieces matches the weight of those coins exactly. As the Celts were in Thrace for a while, it is possible that the cauldron is a fusion of both Thracian (classical) and Celtic (barbarian) elements. I say "barbarian" in a positive sense of course!