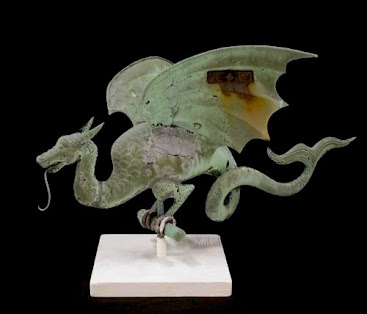 The only question in the French presidential election is, "Do you hate Mr. Macron more than you fear Ms. Le Pen, or vice versa?" (NY Times) In their last debate, Macron shredded le Pen over her ties to Putin and Russia. Video with subtitles at the link. And here's a BBC look at the whole debate.

New Yayoi Kusama exhibit, with an infinity room and other stuff.

Explication of a very early Sumerian cuneiform tablet from Uruk.

Iron Age shoe from one of the melting ice patches in Norway.

The 15th-century study of the Duke of Urbino, remarkable woodwork.

A copy of the world's oldest guide to tennis, printed in 1555, is for sale.

Book sales are up in the US and the UK (at least) and some people say part of the reason is the popularity of "BookTok," TikTok videos about buying and reading books.

Biden administration using $5.5 billion to encourage school districts to get greener, everything from electric buses to better insulation in old buildings.

Archaeologists fire another salvo in the war over when the first people reached the Americans, using some new statistical techniques to argue that all the sites supposed to be more than 14,000 old are crap. Doesn't address the footprints, though.

Lessons from Ukraine on how to make Taiwan harder to conquer. A lot of it is about stockpiling weapons.

Some thoughts on whether tanks are still useful in the era of drones and missiles.

Transcript of a briefing by Pentagon spokesman John Kirby on April 19. This is where he revealed that other nations have supplied Ukraine with spare parts that have allowed them to get more aircraft flying. To me the interesting part was his response to a series of questions that all amount to "why aren't we giving them everything now?" Because, he says, you can only smuggle so much over the border at once, and we have to focus on using that capacity in the most efficient way to meet the most urgent needs. He seems to be saying that the US is shipping weapons as fast as Ukraine can absorb them and has no intention of stopping.

Inside the network of civilians secretly transporting drones and other military equipment to Ukraine.

Piece by Oz Katerzi in Rolling Stone about the battle of Kyiv, nothing new if you have been following events.

One reason the US is supplying Ukraine with the Switchblade and other loitering munitions – "suicide drones" – is to find out how well they work on a real battlefield; their boosters say they will allow light infantry forces to fight without artillery.

Pro-Kremlin media outlet says the Russian military has lost 13,000 KIA in Ukraine plus 7,000 missing, which is right on the Ukrainian MOD's 20,000 estimate. Also says 116 confirmed dead on the Moskva and over 100 missing, which is right on what western observers thought and therefore lends some credibility to the other figures. Whatever the numbers are, losses on both sides are staggering.

Phone call from Russian soldier who is pissed that the 63 iPhones he was taking home were confiscated by the FSB.

A senior Russian general explains their goals in Ukraine: control of the whole Donbas, land corridor to Crimea, land corridor to Transnistria. (That means Ukraine's whole coastline, including Odessa). They are nowhere near achieving those goals, so this is a formula for a long, bloody war. Some discussion here.

Biden's response: "As Russia continues to grind out brutalities against Ukraine, Putin is banking on us losing interest. He is betting that Western unity will crack. Once again, we will prove him wrong."

The 15th-century study of the Duke of Urbino, remarkable woodwork.

I immediately thought, "Oh, surely that must be referring to Federico III?", and I was not disappointed. I was, however, utterly unprepared for the sheer skill and artistry of the works - quite literally stunning, which is something I do not say lightly, for I can be very hard to impress. The convincingness of the trompe l’oeil effects (at least via photographs) is astounding, and even moreso that they can fool the eye from very different angles.

What is perhaps most impressive and incredible to me, though, is the condition of it all! For being five and a half centuries old, it looks almost like it was made yesterday! Utterly gorgeous and breathtaking.