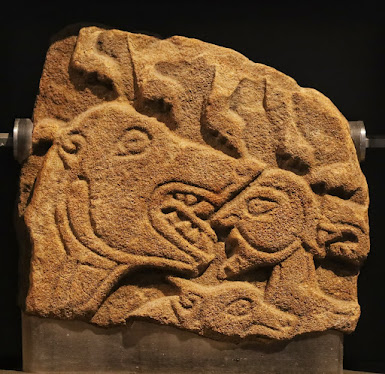 The quest to build aircraft powered by liquid hydrogen.

One of the most amusing squirrel/bird feeder videos ever.

Fascinating discoveries in the genetics of the classical Maya, who were largely descended from South American migrants.

A Nebraska state senator finally identifies the real threat to American culture, goes off on a rant about furries and litter boxes in elementary school bathrooms.

Last piece of a stolen 17th-century tapestry returned after 40 years.

The "People's Convoy" gives up after three weeks of driving around the DC Beltway and accomplishing nothing.

You can destroy coronaviruses with safe ultraviolet light.

MIT reinstates its SAT requirement, says test scores help them identify disadvantaged students who still have a chance at MIT. But they're sorry for stressing people out.

Since American politicians are back to being "tough on crime," it's time to remind everyone that longer prison sentences do not deter crime, but hiring more police to raise the rate of solving crimes does deter crime. The US leads the world in the ratio of prison guards to police, and that is a mistake.

Review of a new, global history of science between 1500 and 2000; on the basis of the review the book sounds factually interesting but theoretically silly.

“Isn’t the art scene today revolting?” Warhol asked Cecil Beaton; “I wish I could find a way of making it worse.” Well, he did.

In today's conspiracy theory news, the Rothschilds paid Charles Darwin to devise his theory of evolution. If you tried to satirize these people you would fail, because you can't come up with anything crazier than what they already believe.

Wringing out a towel in space.

What happens when you adjust medical inflation for improved quality?

Pew study finds that "Multigenerational living has grown sharply in the U.S." The announcement was accompanied by rhetoric about turning away from the nuclear family, but it turns out this mostly means childless people 25-35 still living with their parents. Couples with children still mostly live out on their own.

On every day of the past week, Ukraine has recaptured more territory than it lost. Map of recaptured areas here, keeping in mind that much of this territory was not so much held by Russia as driven through.

Early on April 1, two Ukrainian helicopters crossed the Russian border to launch a rocket attack on a fuel storage facility in Belgorod. Another morale-boosting bit of heroism for Ukraine, and another kink in the already snarled Russian supply chain. Local residents wonder how this happened, since the military had announced that all of Ukraine's helicopters were destroyed on the first day of the war.

Thread on the current mood in Moscow.

Pentagon spokesman John Kirby says Putin is not being given the full picture of fighting in Ukraine because people are afraid to tell him the truth. As several commentators have pointed out, this is a really harsh insult for a former intelligence operative; is the Pentagon just trolling at this point? Somebody said, about a briefing last week, "that wasn't a situation update, it was a slap in the face."

Ukraine's drone warriors. And a grainy video of their work.

Baffled by former US Representative Tulsi Gabbard's pro-Putin rhetoric, a panelist on Russian TV asks if she is a Russian agent. I regard American support for the heinous Russian invasion as a sign of something very disturbing in our society, something broken at a deep level. Same goes even more so for Russian support of the heinous Russian invasion.

Statement from the Ukrainian Azov battalion, which contains a lot of far-right characters, about whether they are Nazis.

European governments are seeing interest among their hardline nationalist groups in fighting in Ukraine, for one side or the other. Not many have gone yet, but police worry that fighting in Ukraine will become for radical nationalists what jihad in Afghanistan was for Muslim extremists. (Washington Post)

Ninety-second video from the Ukrainian side depicting the recapture of Trostyanets near Sumy. And a news report. The Russian defenders were from the 4th Guards Tank Division, another elite formation that has taken heavy losses, including more than half its tanks. Visually confirmed Russian vehicle losses now amount to more than two complete US armored divisions.

Debating the war on Russian television, short video with English subtitles: the speaker says Russia must win to survive, because a treaty with Zelensky would be the end: "win this operation or start the final countdown."

Another example of Russian soldiers refusing to go to Ukraine, allegedly 137 from one regiment this time. Not sure what will happen but captured soldiers in Ukraine have said that their comrades who refused to cross the border got 13-year prison terms. Meanwhile, Ukrainian border control says 460,000 men of fighting age have returned to the country since the war started. There are rumors that some are training in Poland, with Polish and US help, before crossing.

Intercepted call from Russian soldier: "It's hard as hell here."

Nightclubs are back open in Odessa; "music is life."

ISW statement about Russian "withdrawal" around Kyiv: "The Russian high command may have decided to stop its previous practice of forcing units that have already taken devastating losses to continue hopeless offensive operations."

According to this Washington Post piece, transfer of air-defense systems to Ukraine is being held up by caution in Washington about what moves would be "escalatory."

Interesting argument that the unresolved "problem of Donbas" drove Putin to invade Ukraine.

Head of the Ukrainian Orthodox Church clarifies that killing Russian invaders is not a sin.

It's definitely looking like I was wrong about the Ukrainians' ability to launch counterattacks and take back territory, at least in a local way.

I'm a little puzzled by your statement, "I regard American support for the heinous Russian invasion as a sign of something very disturbing in our society, something broken at a deep level." It seems to me this was always where the Trumpish right was headed. After reading about half of the article about Putin and Strelkov, I'm struck at how similar Strelkov's rhetoric and basic stance are to, for example, Sohrab Ahmari's "Against David French-ism." The romantic, paranoid nationalism is the same as what one saw from Steve Bannon, "Unite the Right," and QAnon.

Tulsi Gabbard has long been described as a fellow traveler for BJP and Modi--which, as far as I'm concerned, is part of the same thing.

If I may be so bold: perhaps you find yourself stuck in a world where the only choices are right-wing barbarism and liberal snobbery, and you really hate snobbery, but barbarism is always barbarism, sooner or later.

"You can destroy coronaviruses with safe ultraviolet light."

Clicked through the link, literally the first sentence...

A new type of ultraviolet light that may be safe for people... (emphasis mine)

Yes, there's some evidence that far-UVC could be safe for humans in this kind of application - but we don't actually know that yet, and some long term testing will be needed to find out for sure.

Pentagon spokesman John Kirby says Putin is not being given the full picture of fighting in Ukraine because people are afraid to tell him the truth. As several commentators have pointed out, this is a really harsh insult for a former intelligence operative; is the Pentagon just trolling at this point? Somebody said, about a briefing last week, "that wasn't a situation update, it was a slap in the face."

The thing is, British intelligence has independently said the exact same thing.

@David- I think one difference in our outlooks is that I see American political dysfunction as the product of deeper forces. I am not much interested in blaming people for being bad. I think we have problems we have no idea how to solve, from inequality to teenage anxiety. I long for people to recognize each other's problems and work together to solve them. I see no interest in this in any American faction. I agree with you that hard right characters are the biggest threat, but I don't see anyone on the left as a savior. This is why I was struck by Tom Friedman's line that it is hard to have a country.

@G- True, but US and British intelligence share a lot of material, so their statements likely draw on the same source. They are perfectly capable of launching a coordinated campaign to troll Putin. *Why* they want to troll Putin is a bit of a puzzle, but it is the impression I get from their briefings and written statements. Are they saying, don't bother threatening us because we're not scared of you? Are they trying to undermine his confidence? Are they just jerks?

I imagine deeper forces are at work. They always are. I also feel it's essential to recognize the badness of the Trumpish right. Both can be true, and certainly are in my mind.

The most convincing explanation I've heard from you of your position is your horror at the snobbery you saw on FB against Trump voters back in 2016. That rang true to me.

Perhaps they are targeting a weakness their psych evals of him have identified?

I don't. It is natural for patriots to support their country and for dissidents within their own countries to support the aspirations of foreign powers. As I've frequently said, "Here's the issue the anti-invasion wimps never address: how should Russia have addressed the Ukraine question?".

There is nothing independent about British intelligence.

It's kind of obvious Putin knows substantially more than we do about the progress and deficiencies of the operation. Certainly no less.

Sycophants and blind zealots are not patriots.

How should Russia have "addressed the Ukraine question"? There is no "Ukraine question". Nothing about Ukraine is in question. They are a sovereign state, over which the Russian Federation has no authority, and to which they can lay no legitimate claim, either in whole or in part.

But even if there WAS some sort of "Ukraine question", you ask how else should it have been addressed? Gee, I don't know - how about Russia, a permanent member of the UN Security Council, make use of said privileged diplomatic position and bring their grievances and/or claims to the United Nations General Assembly? Ya know, the sort of thing a civilized country would do, rather than simply starting a war of conquest without any kind of legitimate casus belli, in flagrant breach of international law, and then going on to blatantly commit both war crimes and crimes against humanity?

Of course, you know all of that already. Your readiness to leap to the defense of "poor misunderstood Putin" - a murderous tyrant and authoritarian oligarch - is just the latest demonstration of your persistent bad faith argumentation. I'm not really here to discuss anything with you - that's a waste of time. I'm here to eviscerate your rhetorical bullshit, to cut through the crap, in order to help others who might otherwise be suckered in by your gaslighting to see through the illusion.